Issues of Capitalism and the Importance of Ethics 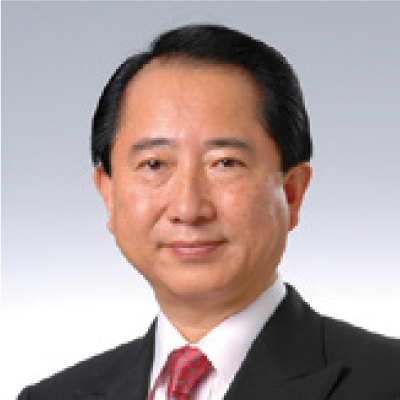 To Overcome Issues of Capitalism

Issues of capitalism are being questioned. This trend has become conspicuous especially in the 10 years since the Lehman shock. Our memory of Thomas Piketty's Capital in the Twenty-First Century having become a bestseller is still fresh. Amid rising concern over the globally widening economic gap, a shocking report was released by OXFAM International, an international confederation of non-governmental organizations (NGOs). The report says that the total assets of the economically disadvantaged lower half of the world's population (approximately 3.8 billion people with total assets of approximately $1,370 billion) is almost equivalent to the total assets held by the world's richest 26 people as listed in Forbes, an American business magazine. Also, the total assets of the lower half have decreased 11% year over year, whereas the total assets of the 1,900 most ultrarich people increased 12% from the previous year. In addition to the problematic economic gap, the dire situation where the world's poorest children are starving to death has not improved. According to the United Nations Children's Fund (UNICEF), 821 million people are still experiencing starvation. Based on these facts, we need to get back to the root of such problems and reconsider what our ideal society, especially the current economy, should be like.

Adam Smith, renowned as the father of modern economics, in The Wealth of Nations, endorsed market liberalization, calling the market self-adjustment function the “invisible hand,” which he says achieves an optimal distribution of wealth. However, in his previous publication, The Theory of Moral Sentiments, he explained the importance of sympathy and ethics as humans' inherent nature. In other words, sharing sympathy-based fair rules and ethics was the underlying condition for the “invisible hand” functioning in free competition driven by individuals' desire. In practice, the animalistic desire is stronger than the rules and ethics, and selfish economic activities tend to control markets. Therefore, we must always use conscious efforts to get back to ethics in judging value. The economic gap and poverty are serious issues that we can never overlook. Also, when the Hitachi Group promotes Social Innovation Business globally, we need to be fully aware of the possibility of inconspicuously touching on these issues.

Importance of Ethics Uncovered by Brain-Science

I had a strange experience in which my question perplexed a world-renowned economist who received the Nobel Memorial Prize in Economic Sciences when I asked his opinion about the economic gaps and widening poverty from the perspective of today's economics. I was told that economics is a discipline that handles economic activities alone and does not analyze their social impact and results. I didn't know what to say to such an answer, but I understood the difficulty of finding solutions for those dire issues from economics (except for economists who sincerely tackle those issues such as Amartya Sen and Joseph E. Stiglitz).

On the other hand, brain-science has shown remarkable progress and has provided much knowledge about humans' inherent nature. For example, pleasure/unpleasure, which is the most basic emotion inherent in organisms, is considered as a survival strategy to raise the survival probability of the species in the process of evolution. The brain functions in charge of pleasurable sensations exist as a reward system and are the source of desire, which is a driver of activities. Desire in the pursuit of pleasurable sensations leads to high survival probability, whereas unpleasurable sensations bring forth fear, leading to instinctive actions to avoid risks. The amygdala nuclei controls autonomic responses associated with fear. The desire and fear-related mechanism is regarded as a basic principle of organisms that can trace back to primitive organisms. This knowledge also provides important suggestions when we think about today's capitalism, which has expanded to a global scale.

Other than the reward system's mechanism, brain-science has clarified that humans' sophisticated emotions such as sympathy and altruism, which used to be considered as cultural products, are of an inherent nature acquired during evolution as a survival strategy. Although partial empathy can be seen in animals too, sympathy is an emotion that only humans have. It is understood that by taking a collective action based on this emotion, humans ended up achieving today's prosperity by overcoming physical inferiority. Although altruistic behavior has been observed in many species in animal ecology and other research, in human society, sympathy and altruism are embedded in society as part of its culture called ethics.

Today, I can feel the awareness or consciousness of ethics increasing worldwide. When I attend many international conferences and emphasize the importance of ethics, there is strong interest—stronger than I expect. Ethics is now a global focal issue. A significant trigger might have been the emergence of innovative digital technologies represented by artificial intelligence (AI) and the Internet of Things (IoT). To utilize our enormous volume of data to optimize actual society, ethics-based standards and regulations are required. However, ethics is inherently a universal theme that is indispensable for considering what engineering and technology, as well as society, should be like.

The word stems of science, engineering and technology are “sci-,” “gin-” and “techno-,” respectively. The meaning of these word stems in ancient Greek are “divide/split,” “to give birth/create” and “imitate nature,” respectively. Now we need to pay special attention to engineering, which is to create human artifacts in the world of nature. Then, to technology, with the same origin as art, which refers to human activities to produce artifacts by imitating nature. It is important to always ask what kind of impact artifacts created by humans including IT might pose on humans or the earth and make assessments in advance as necessary.

In such a context, I regard an ethical perspective as indispensable for the development of engineering and technology. In alliance with engineering academies representing each country worldwide including those in the Vatican, France and the UK, I have engaged in establishing new ethics based on scientific knowledge. The Engineering Academy of Japan (EAJ) [current President: Prof. Hiroyuki Abe, former President of Tohoku University and former Executive Member, Council for Science and Technology Policy (CSTP)] has conducted activities in the 30 years since its establishment as a member of the International Council of Academies of Engineering and Technological Sciences Inc. (CAETS), representing Japan. In 2018, the Academies of Engineering Presidents' Meeting (AEPM) at the Science and Technology in Society (STS) forum*1 issued its “Kyoto Declaration” *2 concerning engineering ethics and education.

Correlation among Science, Engineering and Technology 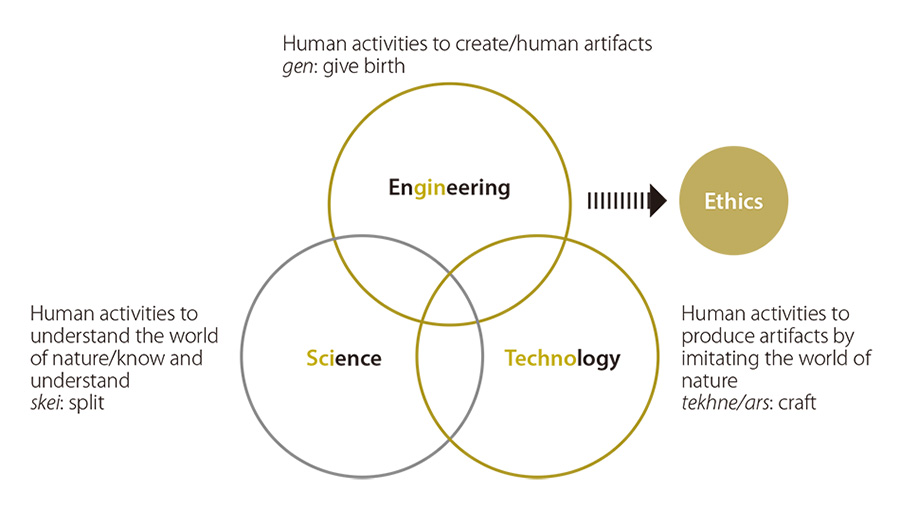