Supporting reactor-decommissioning work by autonomous robots that use worksite data

When a disaster or accident strikes, site conditions need to be investigated but the site is often too dangerous for people to enter. In such conditions, robots are ideal: they can enter the site, conduct investigations, verify the site environment, and perform work safely and accurately. This article explains a customer case in which the users of our solution utilize work data from remotely controlled robots to improve work efficiency without relying on operator skills.

Key points of this article

Utilizing its cutting-edge digital technologies combining operational technologies (OT) and information technologies (IT), Hitachi has made striking advances in research and development with regard to enabling robots to move and act autonomously. Hitachi enables remotely controlled robots to move and accomplish tasks autonomously by using the latest data from worksites. The benefits include more efficient investigations and operations in locations where people cannot enter for an extended period of time. Using such state-of-the-art technologies, Hitachi is participating in recovery of the Fukushima Daiichi Nuclear Power Plant, which was extensively damaged by a tsunami in 2011.

At disaster-stricken facilities, critical requirements are to identify the extent and type of damage as soon as possible and to perform recovery work as fast as possible.

Despite the varying and uncertain environment, identifying the exact state of the damage caused to facilities is critical

Various potential hazards are present in facilities hit by a disaster such as an earthquake or tsunami: for example, toxic substances might leak from damaged buildings and equipment. Such situations always give rise to concerns about potential health impacts and the possibility of further major injuries. In most cases, people are restricted or prohibited from entering such facilities until the situation has been confirmed.

To perform recovery work at a facility that is in an unknown state (one that differs from the state before the disaster), workers must prioritize identifying the actual situation. In potentially dangerous situations where workers are prohibited from entering a facility, robots can be sent in to collect the data needed to identify the conditions. If analysis shows that people must stay away from the facility, robots can perform the recovery work. 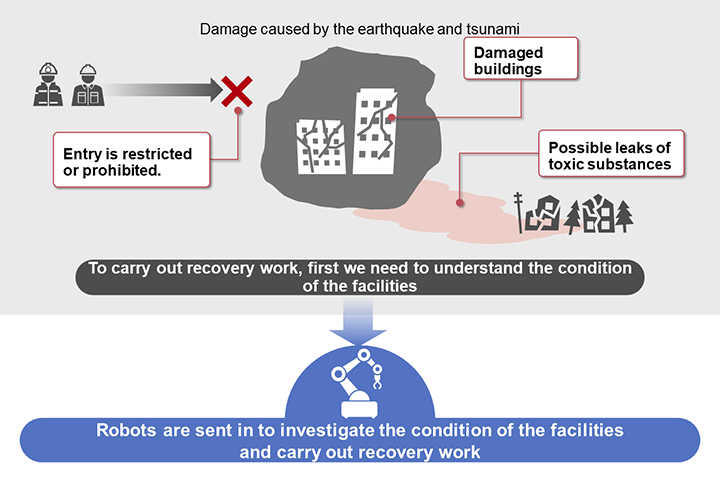 To improve the accuracy and speed of the behavior of robots in such a facility and to enhance reliability, we need to understand the changed and changing states of the facility in real time.

Data collected by robots helps workers maintain an up-to-date understanding of the state of a facility, and to perform work appropriately in accordance with the actual situation. Workers in a location unaffected by the disaster can monitor the state of the facility in real time and perform appropriate operations. This method reduces the operator workload and human errors, and also ensures reliable and remote robotic operations.

The latest information about the work progress and the facility environment can be provided as input to the robots, so the robots can autonomously determine their most appropriate behavior. Because robots perform simple tasks automatically, workers at the facility do not need to spend as much time in making decisions, which helps to decrease work hours. Autonomous robots can move and perform tasks regardless of operator skills, which makes it easier to acquire human resources and the quality of work can be maintained without depending on the presence of highly-skilled experienced workers.

Ever since the major nuclear incident caused by the Great East Japan Earthquake in 2011, reactor-decommissioning efforts have been underway at the Fukushima Daiichi Nuclear Power Plant. Determining the status and performing the decommissioning work from inside a damaged reactor has never been attempted before, even after the Chernobyl disaster, and the work involves immense technical difficulties.

Workers are not allowed to enter the affected buildings

One reason the work at Fukushima is so difficult is the high radiation levels. The nuclear reactor building at the Fukushima Daiichi Nuclear Power Plant contains spent nuclear fuel. The building also contains fuel debris, which is a hard substance created as a result of the cooling of a mixture of various structures and nuclear fuel that melted inside the reactors following the accident. Despite continuous water injection to cool the reactors, the radiation risk is still high and workers are not allowed to enter the accident site.

Entry into the nuclear reactor building is strictly restricted, and use of robots is essential to carry out work safely and properly. Robots equipped with a small camera and a laser meter go inside the facility and collect data such as the work progress and changes in the facility’s environment. Hitachi’s proprietary digital technologies are used to analyze the data collected and accumulated by robots and to provide data visualization. This reduces the workload on operators and improves the efficiency of remote operations.

For example, working from a remote location where radiation levels are low, workers use AI and the data collected from robots to monitor, in real time, the progress of work performed inside the facility.
Enabling robots to move and act autonomously based on the latest data enables robots to detect the site conditions and behave accordingly without the need to rely on operator skills.

Examples of the solution applied to reactor-decommissioning work

This section explains use cases supported by Hitachi’s robotics technologies, where research and development are advancing to enable reactor-decommissioning work.

Supported case 1: Recognizing and estimating the status of work

Data analysis and image processing is used to identify the status of work at the worksite.

AI analyzes images of debris captured by work robots, and the operation panel automatically displays the direction for grabbing the debris. Three-dimensional processing is used to display height information, allowing the user to understand how the pieces are arranged in the pile.

Estimating the positions of robots

Work robots are equipped with position sensors, which provide data that the robots can use to determine their current positions. In addition, users can take advantage of the real-time display feature integrated with a VR simulator to view 3D images showing robot behavior.

Simple tasks can be automated. If the situation is one where an operator needs to make a decision, the robots can stop autonomously.

A series of tasks such as the following can be automated: a robot extends its arm towards a pile of debris or another object that should be taken away, identifies how the pieces are arranged in the pile, lifts the debris or object, and puts it onto a conveyor robot. An autonomous robot can perform such tasks as quickly as, or faster than, a person who does not have much experience in operating robots.

The robots move autonomously from a specified start point to an end point based on a map generated from environmental data. Even if the path contains narrow areas, the robots can avoid colliding with other objects.

Outlook for the future

Robots that use real-time data from the field to move and act autonomously are applicable in many fields, not just in reactor-decommissioning work. For example, applicable areas include operations at the sites of a disaster or accident, operations in space, operations underground, and operations under the sea.

Hitachi believes that active cooperation between humans and robots is important for investigations and operations in unknown situations where danger might be present. Hitachi’s advanced digital technologies can identify site conditions in real time, thereby reducing the workload on operators and improving work efficiency. Our technologies can facilitate remote robotic operations in difficult and changeable situations.

For details on Hitachi’s robotics technologies, see the article below.

Hitachi’s efforts in the nuclear power sector
Development and implementation of robotics technologies for decommissioning the Fukushima Daiichi Nuclear Power Plant
After the accident at the Fukushima Daiichi Nuclear Power Plant, Hitachi conducted extensive research and developed work robots. This article describes these efforts and also explains next-generation robotics technologies expected to be utilized in the near future.

Analyzing data from a site and identifying changes in the site conditions to facilitate robotic operations
Using our solution, you can use robots to collect data from a disaster site and to identify the site conditions. The collected data can be used as input for robot operations to enable the robots to move and act autonomously, which reduces the workload on operators, improves work efficiency, and avoids the need to depend on operator skills.
Systems that provide real-time environment recognition and enable robots to move and act autonomously
Hitachi’s proprietary digital technologies can analyze worksite data collected by robots, provide data visualization, identify the conditions of a worksite, and support robotic operations. These technologies are applicable to many difficult and changeable situations: for example, in operations at the sites of a disaster or accident, operations in space, operations underground, and operations under the sea.
Is there a massive amount of unused data in your workplace?
Is there any place in your organization (for example, a worksite where robots are used) where data is generated on a daily basis?
You can unlock the true potential of your data and create new value through data collection and analysis.

Key points of this article

Utilizing its cutting-edge digital technologies combining operational technologies (OT) and information technologies (IT), Hitachi has made striking advances in research and development with regard to enabling robots to move and act autonomously. Hitachi enables remotely controlled robots to move and accomplish tasks autonomously by using the latest data from worksites. The benefits include more efficient investigations and operations in locations where people cannot enter for an extended period of time. Using such state-of-the-art technologies, Hitachi is participating in recovery of the Fukushima Daiichi Nuclear Power Plant, which was extensively damaged by a tsunami in 2011.

If you would like to know more details about this customer case, contact us by submitting the following inquiry form.
Please enter the customer case code when you contact us.

The Hitachi Group provides consultation for all types of industries.
If you are interested, please feel free to contact us.

*
The service (or solution) specifications are subject to change without prior notice due to reasons such as continual improvements.