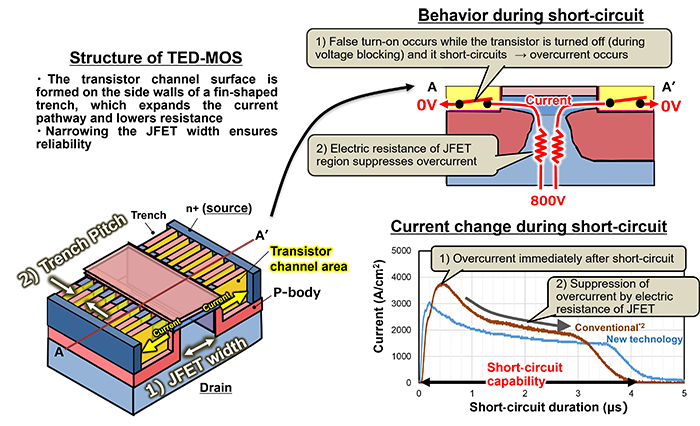 Figure 1: Structure of TED-MOS and physical model for short-circuit characteristics

With the aim of helping achieve a decarbonized society, Hitachi previously developed TED-MOS*1, a power device with an innovative structure that uses the next-generation material silicon carbide (SiC) and delivers improved ruggedness and low power consumption characteristics*2, *3. It has now established a physical model relating to the suppression mechanism for overcurrent, which causes breakdowns when a device short-circuits*4. Furthermore, based on this physical model, it has developed highly flexible device design technology that leverages the structural advantages of TED-MOS. This has made it possible to eliminate the trade-off between ruggedness and low power consumption characteristics that is an issue with conventional power devices that incorporate silicon-based materials, thereby supporting increased energy-efficiency and energy-saving performance for power electric devices used for a wide range of purposes by customers. Going forward, Hitachi aims to further improve the performance of TED-MOS and develop a wide range of applications for the product, such as energy systems, electrical vehicles, and data centers.

Some of these findings were published at the 33rd International Symposium on Power Semiconductor Devices and ICs (ISPSD) held from May 31 to June 3, 2021.

1. Establishment of physical model for suppressing overcurrent which focuses on heat generated during short-circuits

Because SiC power devices have higher dielectric breakdown electric field strength compared with conventional devices that use silicon (Si), it is possible to reduce the thickness of the devices, making them suitable for low-resistance, high-frequency switching. However, the following is an issue: because the dielectric breakdown electric field strength is high when the device is turned off, it is difficult to ensure the product’s lifetime if a short-circuit occurs due to a malfunction.

Going forward, using this technology, Hitachi will eliminate the trade-off between ruggedness and low power consumption performance that was previously an issue and supply power devices with high design flexibility suited to a wide range of customer uses, thereby contributing to the realization of a decarbonized society by reducing power consumption for products used in social infrastructure and decreasing carbon dioxide emissions. Figure 2: Elimination of trade-off between on resistance and short-circuit capability based on highly flexible device design technology

*1
The common name of a semiconductor device with a proprietary Hitachi structure used in electrical power converting devices such as inverters and converters for the purpose of controlling the current by means of switching. TED-MOS = Trench Etched Double diffused Metal Oxide Semiconductor Field-Effect-Transistor.
*2
See news release published on August 30, 2018
(https://www.hitachi.com/rd/news/press/2018/0830.html).
*3
See news release published on January 26, 2021
(https://www.hitachi.com/New/cnews/month/2021/01/210126.html).
*4
This is one of the false operations, where a transistor accidentally turns on under standby condition.
*5
JFET = Junction Field-Effect Transistor.
*6
The device resistance when turning it on.
*7
The current path between the source (current entrance) and drain (current exit) on the transistor device.