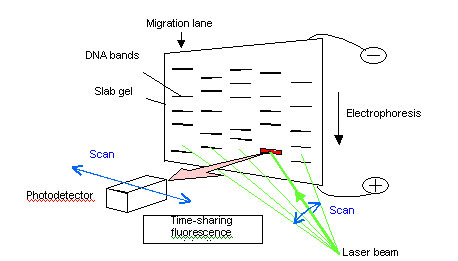 A laser is aimed at a fixed distance along the migration path of DNA fragments. The laser excites the fluorophore tags on the DNA fragments as they traverse the irradiated region, starting with short fragments in order of their length. Fluorescence emission from the excited fluorophore tags is then detected by a photo-detector and analyzed to determine the base sequence of the DNA sample.

As shown in the figure, the laser beam is aimed at different positions on the slab gel sequentially. Repeated scans of irradiation positions allow the photo-detector to measure fluorescence emissions from multiple electrophoresis migration paths in order, and determine the base sequence of multiple DNA samples.

To address these and other issues, Dr. Kambara developed a slab gel DNA sequencer with "side-entry laser irradiation" technology.