Yano: I like talking about the game Go. One of the reasons that AI drew so much attention last year was Go; in particular, when Lee Sedol was defeated by the AlphaGo software created by DeepMind Technologies Limited of the Alphabet Group’.

This is because it prompted a review of what computers and humans respectively excelled at, or not. That was extremely interesting. Of course AI has things at which it excels at or doesn’t, and it is important to understand what these are but this has not appropriately addressed in public discussion.

In the recent competition with Lee Sedol, however, the computer was in a strong position during the middle of the game and even earlier on in the game. What’s more, the human player did not even realize the extent of that strength. The computer made mid-game moves that were not readily understood. When the human player first saw those moves, people commented that they were strange or bad moves. But 3 or 5 moves later in the game, all of a sudden the computer was able to claim territory and it became that those moves were actually good moves. Since then, the same thing has happened many times, and this suggests something extremely important.

As there are many options in moves representing clusters of possibilities remaining in mid-game, it was believed that it would be difficult for computers as the sheer number would make it difficult to compute all possible outcomes. This presumption however was a major mistake. If there are so many possibilities, is it easy for a human? It may be more difficult for a human than for a computer. There was never any guarantee that a human would derive the right answer in the first place. This is where we can see human jumping to conclusions. In fact, the more difficult or complex the problem, more so than at the beginning or in the middle of a Go game, is an area in which AI excels.

In complicated situations, humans look for solutions based on their own experience or standard tactics. Outside this ring though, there is a big white space of possibilities that no one has ever tried that and remain untouched. AI excels in these sorts of areas which are difficult and where humans rely on experience. In contrast, AI fails in cases where the desired results cannot be set numerically.

In the game of Go, all three elements, “Complex,” human-reliance on experience” and numerical results,” exist. Another area that these three elements exist is in business.

Business is also complicated, results can be clearly defined by numbers, and until recently, has been conducted using experience and intuition. This is why we decided to focus on developing and providing AI dedicated to improving business management numbers, because this is what AI is best at and what will benefit society the most.

I used the word “dedicated” but if it can be used to improve business results, then it can be applied to any problem, even in society. Focusing on business means that there is an extremely wide range of possibilities. The advantage of Hitachi’s AI is increasing because what we provide is multi-purpose and focused on business. 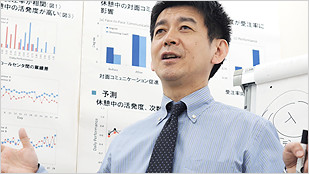 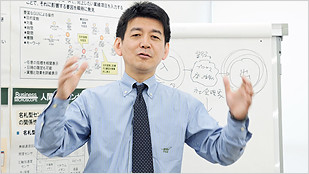 AI becomes useful when it is linked to real world data 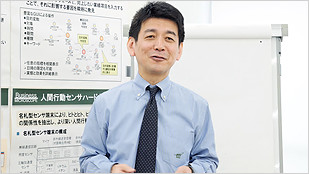 AI is a mechanism for creating diversity 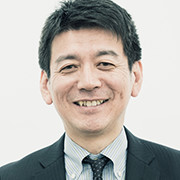 Joined Hitachi, Ltd. in 1984. In 1993, he achieved the world's first successful operation of single-electron memory at room temperature. Since 2004, he has taken the lead in wearable technology, as well as the collection and utilization of big data. His papers have been cited 2500 times, and he has 350 patent applications. The wearable sensor he developed, known as the "Business Microscope," has been described by the Harvard Business Review as a "historic wearable device." He is known for his specialist breadth and depth from AI to nanotechnology. His literary work, "Invisible Hand of Data: The Rule for People, Organizations, and Society Uncovered by Wearable Sensors" (Soshisha Publishing), was elected one of BookVinegar's 2014 10 Best Business Books. Dr. Yano has a doctorate in engineering, he is an IEEE Fellow, a visiting professor at the Tokyo Institute of Technology, and a member of the Ministry of Education, Culture, Sports, Science and Technology's Information Science and Technology Committee. He has been awarded many international awards, including the 2007 MBE Erice Prize, and Best Paper at the 2012 International Conference on Social Informatics.