Extensive Pursuit of Luminance and Clarity for Head Mounted Displays

Wearing a head mounted display like glasses through with images can be viewed is attracting attention as a hands-free device from which information can be obtained. Hitachi has been conducting development of a see-through type head mounted display, through which outer views are also visible. The Company's researchers have extensively pursued "ease of use" for the product, working to create a more compact and more luminous device with a clear and luminous image. As a result, a new technology has been developed, as described below.

Head mounted displays finding an ever expanding range of applications

Can you please describe the head mounted display you have developed? 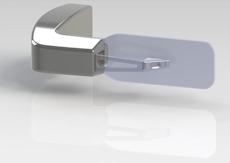 KAWAMURAWe have developed a "see-through" type head mounted display. When you wear the device, you can see both the view in front of you as well as the display images. The device has a reflecting mirror, which reflects and transmits half of the light. That's why the outer scenes are visible. In contrast, head mounted displays that fully shut out external views are called "immersive type," and are often used in playing games. Although their uses are different, both types are gathering attention because their fields of application are expected to expand going forward.

NAKAMURAFor general consumers, see-through type head mounted displays can be used to show the way to route guidance and connect them to social networking services (SNS) as well as other applications. Furthermore, consideration is being given to apply the device to supporting operations at manufacturing plants, for example. Workers would be able to perform work without delay by displaying directions given to them on the head mounted displays they wear. It could be called a business-to-business application.

What is the technology that you have developed? Development of the illumination system—technologies for miniaturization and higher efficiency

Were there any issues or difficulties in developing the illumination system?

KAWAMURATo project images, you need three colors of light—red, green and blue (RGB). There was a challenge in illuminating these three colors of light. It involves the LED and the light guide path (tunnel), shown on the right side of Figure 1. The LED package has three emission points corresponding to the RGB on a plane. If we try to focus the emitted light by only using a lens, the light angle is deviated and the light is slanted. It then causes unevenness in color, in which the colors look separated or distinct. To avoid this, the three colors of light emitted from the LED must be made uniform and homogeneous by mixing them.

In the case of an image projector, a commonly used technique is to utilize a long and transparent tunnel and let the light pass through the tunnel. Then multiple reflections are created and the light is mixed. However, we couldn't apply this technique to head mounted displays due to the need to make them compact enough to wear. We had to create a small structure that could mix colors in an efficient manner. How was this issue solved?

KAWAMURAAt first, we shortened the length of the tunnel for compactness. But we could not fully mix the lights. Then we considered arranging the characteristics of the tunnel itself.

This would enable us to fully mix the light even if the tunnel length was shortened. Moreover, it should be more efficient by allowing no light to escape. Based on this belief, we endeavored to make experimental models through trial and error.

What was the outcome?

KAWAMURAThe approach worked. We were able to shorten the tunnel as well as achieve luminance that cleared our target. In other words, we were successful in realizing compactness while enhancing performance.

Development of the projection system—what is the "clarity" required for a head mounted display?

Does the projection system refer to the section in which the display images are projected onto the eye?

NAKAMURAYes, that is correct. It is the section where the display images are illuminated through the illumination system and enlarged so that they can be seen with the human eye. The principle of the projection system is the same with that of an image projector in the sense that light is projected. However, while an image projector projects light onto a screen, a head mounted display projects light directly to the eye.

Human eyes have sections that serve as lenses and screens. The crystalline lens corresponds to the lens, and retina corresponds to the screen. We see objects and perceive them as light from objects that passes through the crystalline lens and form images on the retina. As for a head mounted display, light is projected from the micro display onto the eye and forms images directly on the retina. Then, it seems as though objects existed there although they do not in actually. These images of objects, which look as if they exist although they don't, are called virtual images.

Figure 2: Mechanisms of seeing images through a head mounted display 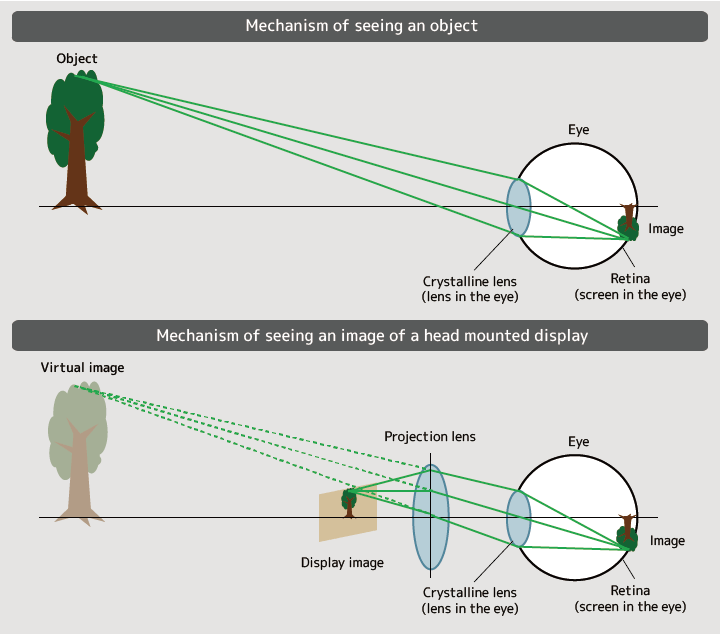 Can you tell us about the technology you developed for the projection system?

What do you mean by "cutting" light that causes distortions?

KAWAMURAWhen people with poor eyesight look at objects in the distance, they often narrow their eyes, don't they? By doing so, they are able to get a little clearer view. This is because redundant light that causes image distortions or blurring are cut off by limiting the scope of vision. The same principle is applied to the projection system of the head mounted display.

NAKAMURAIn particular, we assumed situations in which eyeballs move. When they move, they inevitably see spoiled images that have distortions or blurring. To prevent this, we worked to arrange that only clear images are delivered to the scope of the eye's movements.

Were there any issues that you struggled with in the development?

NAKAMURAIn the actual use of a head mounted display, the eyes would move or the head mounted display would slide or slip. With our first prototype, spoiled images were visible when the eye moved. So we repeatedly created experimental models that took into consideration "ease of use," such as "the scope of visibility required when they are used on a work site" and "the degree of clarity at which images must be seen."

With an image projector, you can walk nearer to the screen to see. So the image must be extremely clear. However, the criteria are somewhat different for a head mounted display because the position of the eye and the image remains the same.

We repeatedly produced prototypes to investigate the "clarity" and other criteria required for a head mounted display. We brought such prototypes with us to various places for testing to meet the needs of the actual use scenes as much as possible. For example, we used them in warehouses for sorting things and in manufacturing plants. We wanted to use them while riding on a motorcycle, but we were not allowed to ride such within the plants. Instead, we tested them by riding on a bicycle.

Through these measures, we investigated how to project the necessary and clear images within the required scope of vision. The investigation results were reflected in the technologies to cut out the unnecessary portions of light and make an aspheric lens, and we elaborated to refine the prototypes to products that could actually be used.

In pursuit of ultimate ease of use

What assessments have you received for the head mounted display you developed?

NAKAMURAMost of the clients say that "the image is clear and luminance" when they see the product. Moreover, those who have tested other head mounted displays often evaluate our product very highly. We have received such reactions not only in Japan but around the world. Indeed, it is an achievement of research both in the illumination system and the projection system.

KAWAMURAThere have been good reactions as it is a topical subject, and future expansion of the development is being discussed proactively within Hitachi. We were originally involved only in the optical system, but related people are gathering and working to move the project ahead and to a wider extent, such as developing a solution that utilizes the head mounted display.

How do you wish for the technology you have developed to evolve?

KAWAMURAWhen developing the tunnel in the illumination system, I used a technology to mix the transparent materials with other substances. Responses to this technology are quite positive at exhibitions and other venues, and I hope to apply it to other areas. I wish to create something new by using the technology not only for head mounted displays but also for medical equipement, testing equipment and other devices that use optics.

NAKAMURAWith regard to the head mounted display, our clients request us to prepare a larger screen. In fact, with a larger screen, it is more difficult to make the image peripherals clear. But we are conducting technological development to realize a larger screen while keeping the images clear.

KAWAMURAI agree. Depending on the subject, it may be just an ideal or we may be able to realize it. Ideally speaking, the head mounted display is still too big and too heavy. When I wear it, I can't help feeling that "I am wearing something on my head." Instead, I want to realize a product that allows the wearer to have a wide view without any cares about the device, while images can be projected anywhere in his or her vision. If it is realized, many more people would want to use it. There are countless matters to consider with regard to the technologies to realize it, but I want to push it forward step by step.