As the business environment changes from day to day, the required storage technologies are also changing correspondingly. To meet the expectations of customers who manage storage devices at their data centers and other venues, Hitachi, Ltd. has developed a new storage virtualization technology, called "global storage virtualization," which virtually integrates multiple storage devices. This technology, created through repeated dialogues with customers, makes data storage operations easier and more convenient.

What technologies are currently required for data storage?

KAWAGUCHIWhat users want is technologies that allow them to provide storage services without interruption. In particular, there are strong requests for us to address the problem that the provision of services needs to be stopped when replacing old storage devices with new ones.

When I was dispatched to Hitachi America, Ltd., I participated in Design Sessions, which provided an opportunity for the company to demonstrate Hitachi's technologies to customers and receive comments from them. In discussions with many customers I found that they wanted to get out of situations in which they were forced to stop providing storage services. Some of them were particularly eager to achieve this, saying that they were in trouble, asking us when we would be able to do it and urging us to realize such.

To figure out how we would be able to meet the expectations of the customers, we held joint discussions and investigations at our operation bases in Japan and the U.S. Eventually, we hit upon an idea that the issue would be solved if the old storage device and new device could be used as a single device all together. As such, the concept of the new storage virtualization technology was born. 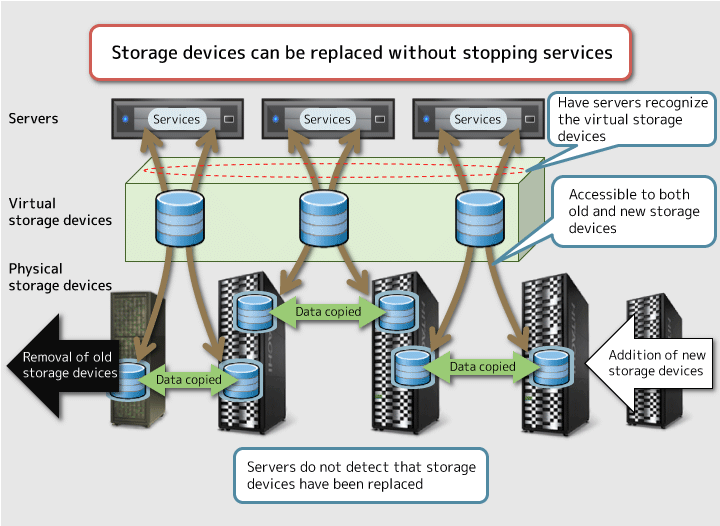 KAWAGUCHIMoreover, if new data are written while replacing the devices, they are reflected to both the old and new devices so that both devices contain the latest data. Because of this, disaster countermeasures can be maintained during the replacement, by copying data from the respective devices to different devices located in distant places, for example. 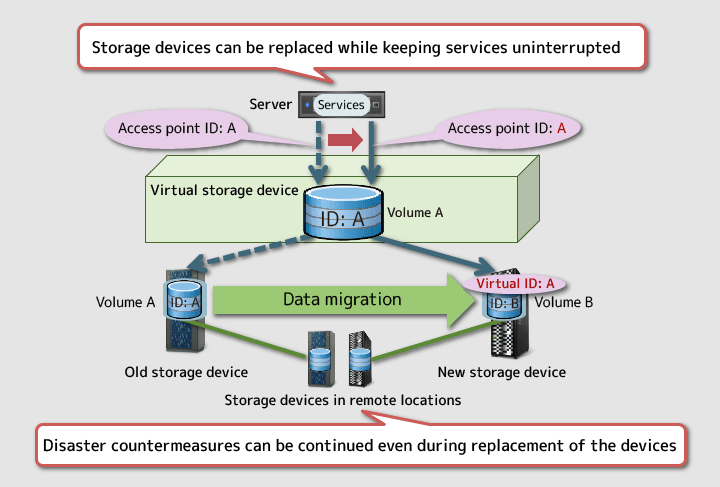 The global storage virtualization technology uses this virtual ID to provide the function in which the services are uninterrupted even when troubles occur with the devices.
Conventionally, business operation systems have been duplicated as a means to counter any troubles. However, this is not sufficient as the method requires time to switch from one system to the other when troubles occur, inevitably causing a certain period of time in which the services are stopped. Accordingly, we established a pair of systems that are both in operation around-the-clock, so that the services are continued even if one of them has troubles as the other system keeps working.
This mechanism allows for both devices to store the same data when data is written into either one of the devices. Therefore, when troubles occur to one of the storage devices, you can switch to the other system without interrupting services.

Figure 3: Function to keep services under way even when troubles occur 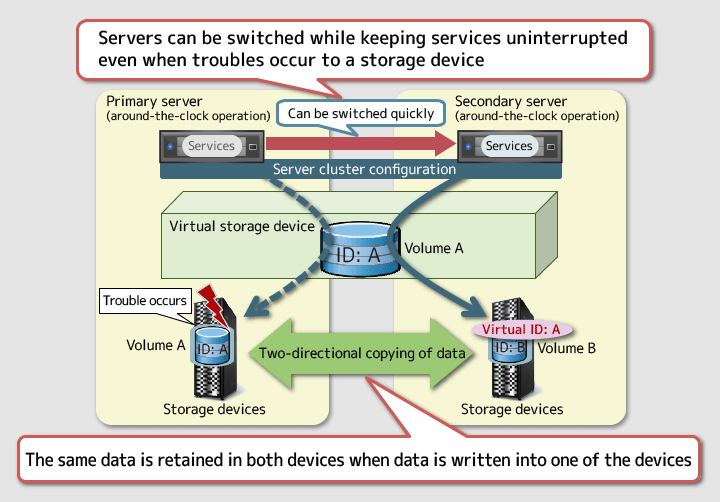 What aspects, in particular, were focused on and elaborated on?

KAWAGUCHIOne of the items we elaborated on in developing was the management of the virtual IDs. The virtual IDs are managed by the devices in sync, mutually controlling when to and when not to respond to the servers, so that each storage device contains the same data. As there had already been a mechanism to manage the IDs, we had to add a new mechanism while taking over the existing mechanism. We had a hard time devising how to incorporate the new mechanism into the existing one in a matching way.

SAITOFor me, it was processing of the input and output signals from the server. What data storage has to achieve is fairly simple. It's just reading what has been written. However, the servers give more complicated orders, not just for reading and writing. We worked to make it possible to meet such complicated orders by the servers one by one. We could have focused on the basic reading and writing and not considering anything else. Instead, we pursued a technology that sufficiently enables other functions. It is thus a "more perfect product," so to speak. We prepared processing steps to make it possible for each storage device to store the same data even when the server gives complicated orders.

KAWAGUCHINeither of these subjects was so extravagant in appearance, but we made steady efforts to realize them.

Providing products that "appeal" to the hearts of customers

Are there any other matters on which you elaborated? SAITOWhen the functions we were to develop were defined to a certain degree, we prepared an opportunity to hold discussions with our customers again. It was the first time to set up such an opportunity to discuss with customers after the concept had already been determined. We proposed to the customers the functions we intended to achieve through commercialized products as well as functions that had somewhat different characteristics, and asked them what would appeal to their hearts the most.

KAWAGUCHIWe wanted to first put priority on providing functions that were required by customers. Moreover, we wanted to offer products that "appeal to the hearts" of the customers. To achieve these goals, we created this opportunity to check if the use cases and functionality we assumed would really match the requirements and demands of the customers, and if we were on the right track.

When we talk with customers, we do not only ask them what bothers them but also make proposals to them and ask for their comments, as we usually do when deciding on the concept. We explain our intention of creating so-and-so functions under the so-and-so concept, and ask them if so-and-so proposals may appeal to their hearts. We receive a variety of comments from multiple customers, consider how we can meet their expectations, again make proposals to the customers and ask for their comments. We repeat this process many times.

SAITOWhen we created the functions, we take the perspective of customers. When creating the functions used for replacing the storage devices, we made devices so that we would add as little change to the old storage models as possible. It is true that, if we add touches to the old models, we could realize more functions. However, this would limit the number of models that could be replaced. This is surely inconvenient for customers.

Therefore, we incorporated most of the functions to the new models carrying the global storage virtualization technology, making it possible for them to replace any old model. At first, we thought we wouldn't need to touch the old models at all. But in effect we had worked on them a bit. Still, we kept the procedures for replacing the storage devices to a minimum, and we believe the customers are satisfied with the product. 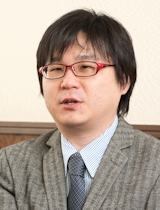 For example, the global storage virtualization technology can specifically offer the function of keeping services uninterrupted even if the system has troubles. However, system troubles can happen anywhere, such as with the storage devices, servers and networks. How long can we access data before the service stops when any trouble happens? At present, there is no determined method to assess this issue. Worse, no proposal has yet been made as to the assessing methods. So the hurdles may be high, but I want to take this challenge.

We have succeeded in fully duplicating data between two storage devices. I'm thinking of applying this achievement to different use cases. I hope some minor changes will allow it to be applied to completely different use cases so that commercialization is accelerated. I want to let the storage virtualization technology evolve to further solve problems for customers.