A lot of water is being lost around the world due to cracks in water pipes and other causes. Especially in Southeast Asia, some countries lose more than 30% of the water in the distribution process from water purification plants to each household. As such, taking measures against water leakage has become one of global challenges to be addressed.

In this regard, Hitachi has developed an innovative technology to support leak surveys. The technology, which has already gone through a field test, makes it possible to deal with leaks that are smaller than those by conventional methods. This development was achieved by researchers looking at the matter from a different angle: thinking of areas instead of points.

Is it correct that water leakage is a serious global challenge?

ADACHI"Water" is a topic attracting global attention. In around the year 2000, some people started to call the 21st century the "century of water." There is even such an extreme remark that, while oil caused wars in the 20th century, water would bring about wars in the 21st century.

Water is distributed from water purification plants to each household through water pipes that are buried beneath roads. These pipes will inevitably become aged as they are used over a very long period of time—say, 40 to 50 years. When they become aged, they develop cracks, from which water leaks. Water leakage is a serious problem especially in Southeast Asia. In some countries in the region, more than 30% of the distributed water is lost as leakage. This means that a considerable proportion of precious water is wasted without being used. In that sense, the technology we have developed to counter water leakage is also highly important from the viewpoint of protecting valuable water resources.

Was the technology developed with the aim to promote applications overseas?

ADACHILeakage from water networks is highly controlled in Japan. For Tokyo Prefecture, leakage is kept at approximately 3% of the distribution volume. We hoped to spread such excellent infrastructure to other regions outside Japan.

TAKAHASHIFor a long time, Hitachi's water-related business conducted operations only in the domestic market. However, the domestic market has matured, and we decided to look at overseas markets to extend its business. As a part of this trend, Hitachi started a project on the "Intelligent Water System" in 2010. It aims to establish overseas business in the water environment domain including water supply. While the project pursued development of a variety of technologies, it was conceived that, especially in overseas countries, water leakage management was the challenge of utmost need. So we decided to start research and development on technologies to promptly reduce leakage and efficiently manage them.

Can you describe to us the water leakage management technologies?

ADACHIIn general, leakage management technologies aim to reduce leakage volume. They include such methods as reducing excessive pressure on water pipes, searching for the locations where water leaks occur, quickly mending the leaks and replacing water pipes. Different methods are utilized in accordance with types of leaks.

First, leaks are classified into "unavoidable leaks," which cannot be found through acoustic leak surveys, and leaks that can be found through surveys. Moreover, the later type of leaks are divided into those that are hidden underground and hence usually unreported, and those that will eventually appear on the ground surface and will then be reported. For the leaks hidden underground, proactive surveys must be conducted to find them—walking above the water pipes while listening to the sound caused by leaks. The technology we have developed is to support these proactive surveys in order to find the underground leaks and to efficiently keep their leakage volume small. 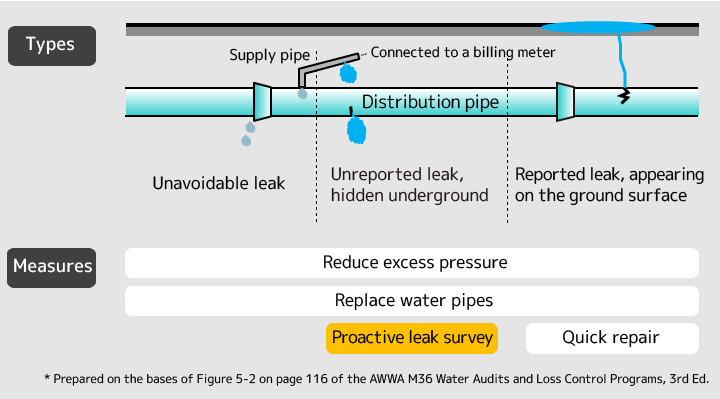 Thinking of areas instead of points

Can you tell us more detail of the developed technology?

ADACHIWater leakage management is conducted by dividing the water pipe networks in the managed areas into units called District Metered Areas (DMAs). The leakage volume is audited by measuring the volume of water going in and coming out of each unit. Usually, the geographical density of leakage in the inside of a DMA varies depending on the location. Conventional methods, however, cannot tell which locations in the DMA has a large volume of leakage. Therefore, in order to find out where the water is leaking, it was necessary to conduct acoustic surveys by walking above the entire water pipe network within the DMA. 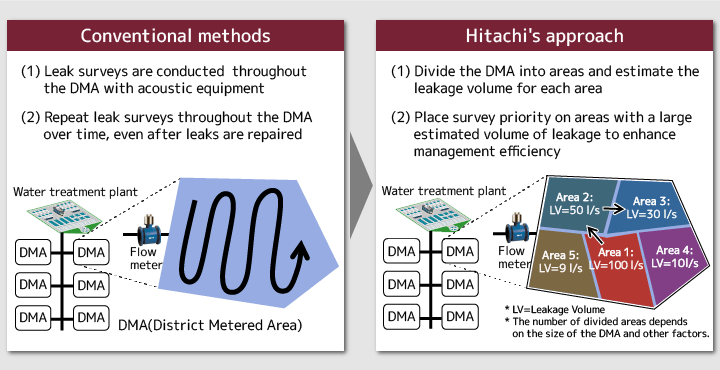 TAKAHASHIThis technology uses such information as age of pipes in order to estimate the leakage volume for each area. For estimating the leakage volume, a technology called "hydraulic analysis" is typically used. It estimates water pressure within the pipe networks and other items. However, it is rather difficult for hydraulic analysis alone to identify the areas, because you need to set up a lot of parameters that show the locations where water is leaking. To complement this issue, our technology combines hydraulic analysis with the asset information—for example, how the pipes are located within the area, and also which pipes are old and new. Hereby the technology tactfully finds the distribution of water leaks and estimates the areas in which water is leaking.

Is the dividing into areas the key of this technology?

TAKAHASHIYou are correct. Generally, researchers would consider methods to identify the points of leaks, as they want to pin-point the leakage locations. However, it is very hard to find the specific points of leaks. Such methods can only detect large leaks, and there is no way to find small ones. Then, we would rather try to find the areas in which leakage is taking place, instead of pin-pointing their locations. This way of thinking characterizes our technology. We believe that, for efficient management and quick leakage reduction, it is extremely important to grasp the areas in which there is a large volume of water leakage.

ADACHIIf there are many small leaks, a lot of water is lost as a whole even when the each case of leakage may be small. In order to address this difficulty, our technology aims to estimate the areas that have a large volume of leakage as groups of small leaks.

From a desk study to a field test

Is it true that a field test of the technology was conducted outside Japan?

ADACHIThat's right. We conducted a field test with a water supply agency in Southeast Asia to verify how accurate the technology can estimate the areas. Through the test we confirmed the volume of water leaks that allows us to identify the areas with water leaks within the DMA. As it is hard to actually create water leaks, we conducted the test by discharging water from fire hydrants to simulate leaks to verify if the technology can estimate its water volume. As a result, we were able to achieve a goal of accuracy. It was confirmed that our method correctly found the area where the leakage of 3.5% of the average water supply volume was simulated.

Finding 3.5% leakage is difficult to spot by the methods trying to pin-point the location. It may be possible in some limited situations where the 3.5% leakage takes place at a single location and there happens to be a pressure meter installed in its close proximity. In reality, however, it's not an easy task. But our technology was able to achieve it.

What were the evaluations given to the results of the test?

ADACHIThe results of the field test were helpful to convince people in the business divisions in Hitachi of the effectiveness of the technology. That was a big step. In fact, I didn't worry too much about the success of the test. I believed it should, as we had worked hard to elaborate on the technology. However, people in the business divisions who worked with us appeared to have been worried whether the test would really go well. So I was pleased to hear the opinions, after the field test, that "the technology has become convincing through the test" and "let's continue to work hard so that we can further expand the business."

Did you find anything impressive through the desk study stages to the field test?

TAKAHASHIOur team was less experienced in the subject of this research and, as we conducted the research, we were guided by a professor specialized in this topic. The professor's advices were impressive. At first, when Mr. ADACHI presented simulations, many of the comments the professor gave us were rather harsh.

ADACHIOn the desk study, we could make assumptions that were convenient for us. In reality, many things won't go as in simulations. So the professor, based on his experience, gave us various advices that were to the point. Based on such advices, we refined our research by repeatedly changing the assumptions for the simulations, and conducted the field test to prove that the technology would be practically applicable.

TAKAHASHIFinally, the professor said to us, "that looks good." We felt that this remark represented a recognition by a prominent specialist.

Can you tell us about the future prospects of the water leakage management technology?

ADACHII think that, on actual sites, it is important to combine a variety of approaches on top of the leak surveys. Such approaches include quick repair of water leaks, early detection of leaks on a real-time basis, adjusting pressure, management of pipe networks, efficient replacement of pipes and water distribution control. As for the real-time detection of leaks and replacement of pipes, we will have to continue developing the technologies through field tests.

TAKAHASHIHitachi is strong in the water distribution control and it has a proven track record in Japan. In overseas markets, however, we are yet to start. I hope Hitachi can provide comprehensive solutions for water leakage by combining the water distribution control with the new water leakage management technology for overseas markets. Rather than having certain individual technologies, it is better for us to have the complete set of necessary technologies. That would make us more competent and allow us to expand our business implementations.

What are your personal goals going forward?

ADACHII think technological development is meaningful only when the technology is actually used. As for the water leakage management technology, I hope to further improve it so that it will be widely used.

TAKAHASHIAside from water leakage, I have recently been engaged in energy management research. It is about technologies to reduce and shift peak electric power loads in accordance with a request from power companies. I am thinking of the possibility of applying this energy management primarily to the water supply area and also to other infrastructure systems including railways, so that power consumption can be reduced efficiently as a whole. It should not be limited to water supply. The technology is basically for water supply, but I wish for it to further evolve in coordination with other infrastructure technologies to eventually achieve bigger objectives.