Having embarked on the core product development of onboard signalling equipment called ETCS (the standard European railway signalling system), in 2013 Hitachi obtained certification of conformity against the CCS TSI as stipulated by European directives. Prompted by this core product development, Hitachi took its first step towards becoming actively involved in the European signalling market by becoming the first non-European company to be accredited for participation in the UK ETCS market. Hitachi won its first order for onboard ETCS equipment in May 2014. The order came from Network Rail, the company that manages railway infrastructure in the UK, and was for use in two Class 37 locomotives operated and owned by West Coast Railways. In addition to manufacturing the equipment and gaining certification of conformity against the TSI and other UK standards, Hitachi, through its associated company in the UK, Hitachi Rail Europe Ltd., also undertook the installation of the equipment onto the locomotives and conducted testing, after which the successful APIS from the UK regulator was obtained. With ETCS set to be adopted in various other parts of the world, Hitachi intends to draw upon this experience to utilise onboard ETCS equipment as a key component of the signalling systems business throughout the world. 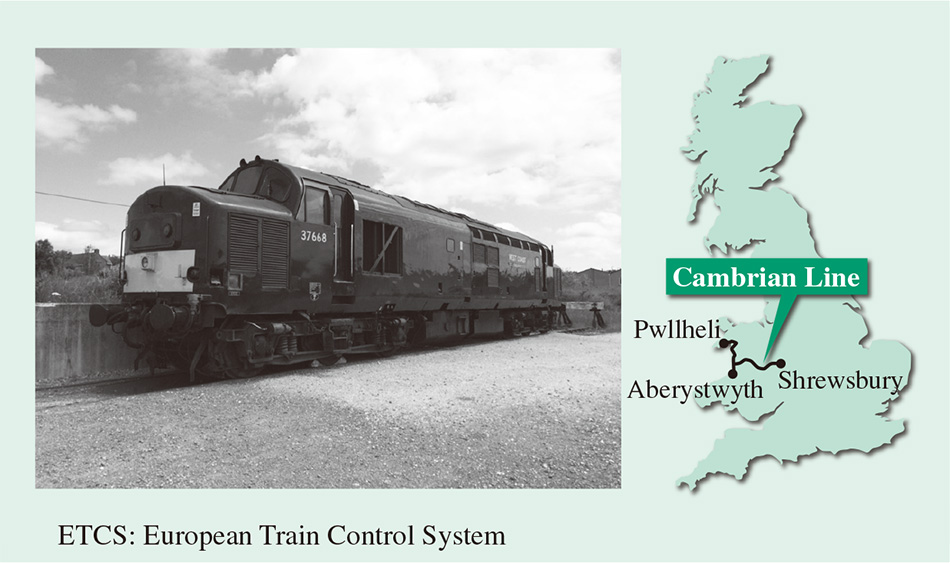 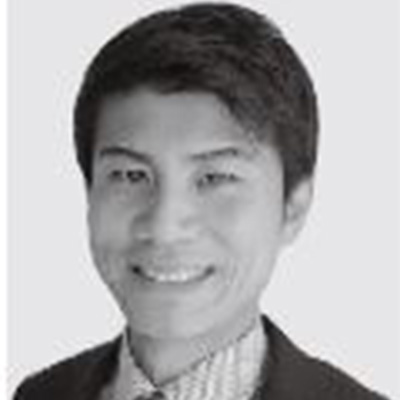 Mito Rail Systems Product Division, Hitachi Ltd., as a Signalling Engineer. During a stay of 3.5 years in the UK, he led all ETCS systems engineering activities for the Class 37 ETCS retrofit project. Now he is involved with other ETCS projects being conducted worldwide. 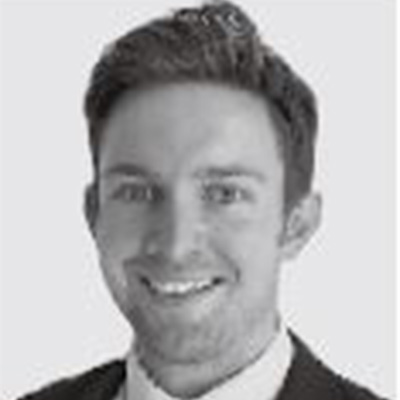 Hitachi Rail Europe Ltd., as a Signalling Engineer. He was responsible for the Class 37 ETCS retrofit project as a project manager including final system authorisation. He continues to work for Hitachi within the UK signalling team leading live projects and bids. 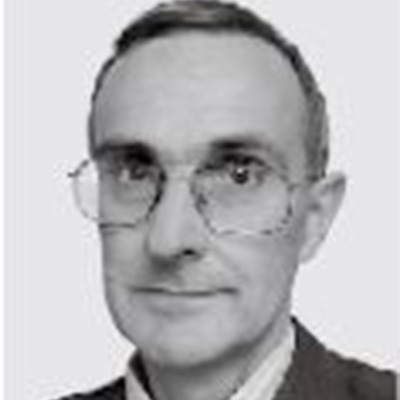 Currently works for Hitachi Rail Europe Ltd., as an engineering consultant with a background in software development, system engineering, and safety management for railway signalling systems. He was instrumental in the development, authorisation, and safety approval of this ETCS project. 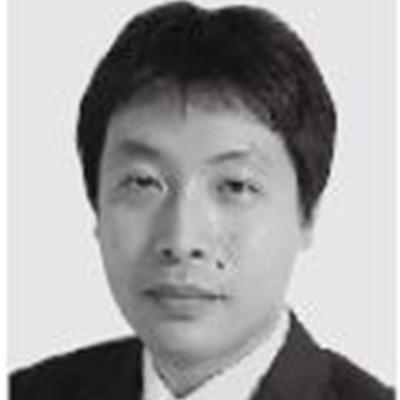 Mito Rail Systems Product Division, Hitachi Ltd., as a Safety and Approvals Engineer. For the Class 37 project, he successfully achieved certification for the ETCS equipment installed on the Class 37 locomotives. He is currently in charge of homologation work for multiple Hitachi signaling projects. 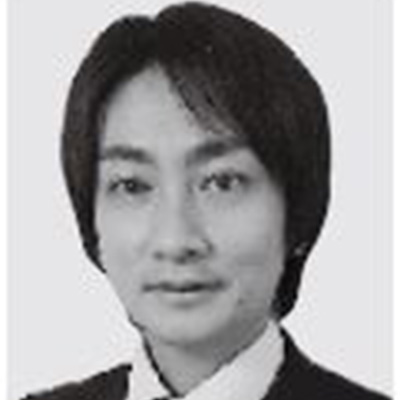 Mito Rail Systems Product Division, Hitachi Ltd., as a Signalling Engineer. He greatly supported the project via creation of the product technical specification and then through validation activities. He is now pivotal for Hitachi in all UK ETCS projects.

WHILE the Cambrian Line, meandering for 215 km between Shrewsbury and Pwllheli in Wales, is currently the only part of UK rail infrastructure to operate under the control of the European Train Control System (ETCS)*, the intention is to install ETCS on major railway lines throughout the UK by 2025. This will require the installation of onboard ETCS equipment to both new rolling stock, such as the Intercity Express Programme (IEP) fleet(1) being supplied by Hitachi, and also to legacy rolling stock.

Hitachi established its ETCS core product development project back in 2008 by embarking on the development of onboard ETCS equipment conforming to the Control Command and Signalling Technical Specification for Interoperability (CCS TSI), stipulated by European Union (EU) directives. The equipment subsequently received certification of conformity with the TSI, including Safety Integrity Level 4 (SIL4), from an EU-designated third-party conformity assessment (certification) agency in 2013. Hitachi also worked jointly with Network Rail (NR) to install these core products onto a Class 97 locomotive including a trial on the Cambrian Line to verify ETCS functions on an actual locomotive, including interoperation between Hitachi onboard ETCS equipment and wayside ETCS equipment from other vendors. The results proved that Hitachi's onboard ETCS equipment installed on an actual locomotive used together with wayside ETCS equipment from other vendors could successfully implement ETCS functions based on the TSI. These results led to Hitachi becoming qualified to bid on ETCS projects in the UK market(2) and winning a product order for onboard ETCS equipment for two Class 37 locomotives.

*
Both onboard and wayside equipment supplied by vendors other than Hitachi.

The UK is actively pursuing plans to install ETCS as the primary signalling system on major railway lines. Hitachi has taken the lead ahead by winning an order from NR for onboard ETCS equipment including its installation to two Class 37 locomotives owned by West Coast Railways (WCR) (see Fig. 1). This order is a turnkey project requiring Hitachi to undertake a series of processes ranging from manufacturing the equipment to obtaining operational authorisation to place the ETCS into service.

Hitachi installed onboard equipment onto two Class 37 locomotives for use on the Cambrian Line by West Coast Railways and obtained authorisation for its use.

Fig. 2—Block Diagram of Onboard ETCS Equipment for Class 37 Locomotives. 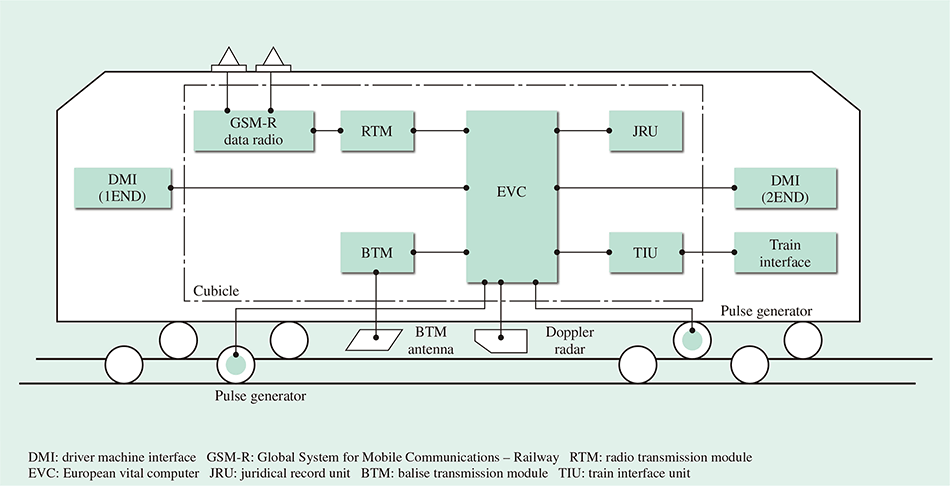 As the Class 37 locomotives have driving cabs at both ends, the onboard ETCS equipment is designed to allow operation from either cab, with two DMIs provided for each unit. 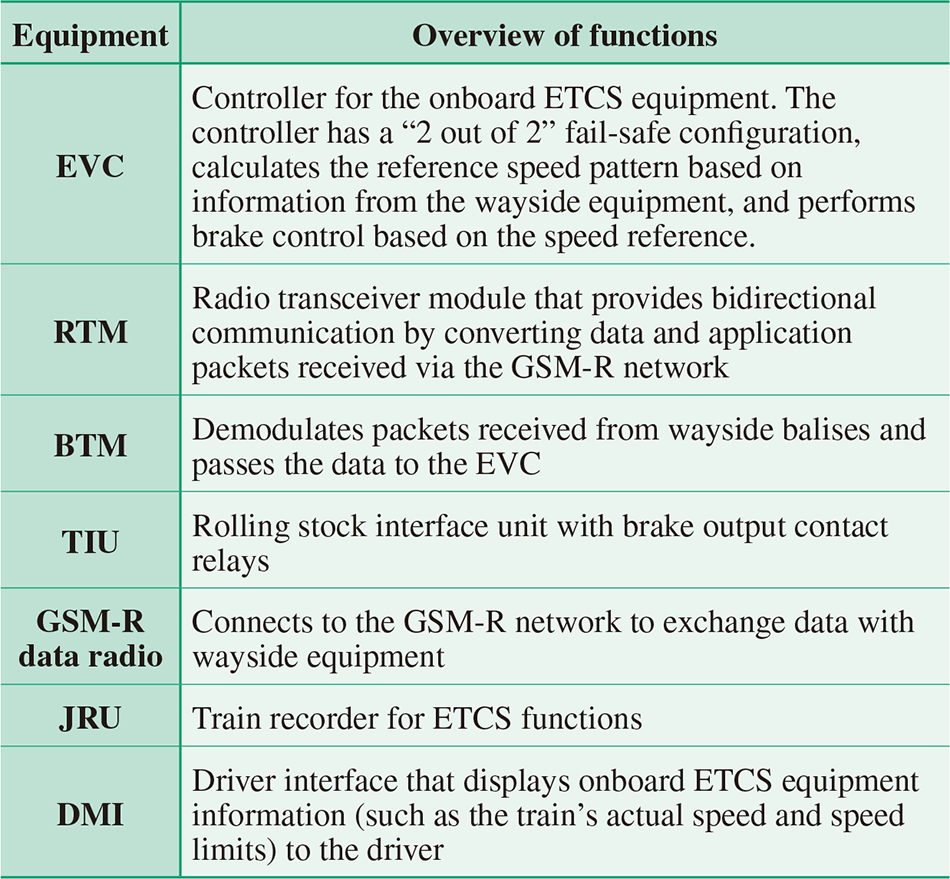 MANUFACTURE AND USE OF ONBOARD ETCS EQUIPMENT

The major challenges faced in the stages from the manufacture of the onboard ETCS equipment for the Class 37 locomotives to its entry into operation are as follows (see Fig. 3);

The following sections describe how Hitachi dealt with these challenges.

Fig. 3—Sequence of Stages in the Manufacture and Implementation of Onboard ETCS Equipment. 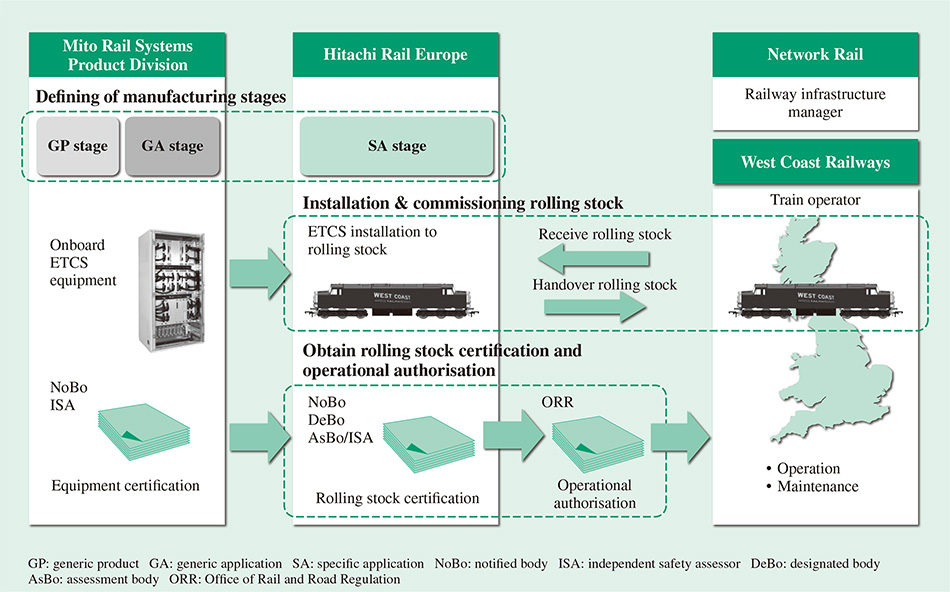 The GP and GA stages mainly cover equipment development and certification, while the SA stage deals with installation of the equipment onto the rolling stock by the local subsidiary and the certification for this work. The work is completed as a turnkey project by acquiring operational authorisation from the regulator (ORR) to permit actual operation.

Hitachi arranged and undertook the stages from manufacturing the onboard ETCS equipment for the Class 37 locomotives to installing and commissioning it according to the following four stages (see Fig. 4).

(1) Generic product (GP) stage
The objective of the GP stage is to implement the general functional specifications for ETCS, which include interoperability between onboard and wayside equipment. This stage involves achieving conformity to the TSI in accordance with EU directives and obtaining certification to this effect. The intention is that the equipment built during this stage will be suitable for use not only in the UK but also in markets around the world, including Europe and Asia. Hitachi had already obtained certification of conformity to the TSI for the GP (GP equipment certification) from a certification agency as part of the core product development referred to previously(2).
(2) Generic application (GA) stage
The objective of the GA stage is to implement the country- and region-specific specifications. In the UK, this required satisfying the requirements of the Notified National Technical Rules (NNTR) and the Railway Group Standards (RGS) in accordance with the Railways Interoperability Regulations (RIR), and obtaining certification to this effect.
UK-specific specifications (switching between existing signalling systems, for example) were implemented on the base provided by the core products from the above GP stage. The project also successfully obtained certification of conformity to the standards for GA (GA equipment certification) from a certification agency.
(3) Specific application (SA) stage
The objective of the SA stage is to implement the specifications specific to the rolling stock. In addition to installing the equipment onto the rolling stock, the implementation needs to be done in a way that takes account of the characteristics and specific functions of the rolling stock. This stage included demonstrating conformity to the various TSI rules stipulated by EU directives and NNTR and other rules stipulated by the RIRs (GP and GA equipment certification). In addition, the processes specified by the Common Safety Method for Risk Evaluation and Assessment (CSM RA) rules for safety management processes were implemented, as stipulated by the Office of Rail and Road (ORR), the UK regulator.
(4) Authorisation for placing into service
To obtain operational authorisation, Hitachi submitted the documentation for rolling stock certification together with the documentation for GP and GA equipment certification to the ORR for auditing in order to obtain Authorisation to Place into Service (APIS).

As a result of manufacturing the equipment, installing it to the rolling stock, and obtaining certification of conformity against the standards as defined by the GP, GA, and SA stages, Hitachi has taken the lead in comparison to its European competitors by successfully completing all stages of the process to allow achieve operational service for the locomotives.

HRE received the Class 37 locomotives from WCR and then undertook the following four steps to install the onboard ETCS equipment manufactured by the Mito Rail Systems Product Division.

The concept design was undertaken based on the required specifications.

The detailed design of the equipment followed the concept stage.

On the basis of these processes, installation and commissioning onto the rolling stock was completed. 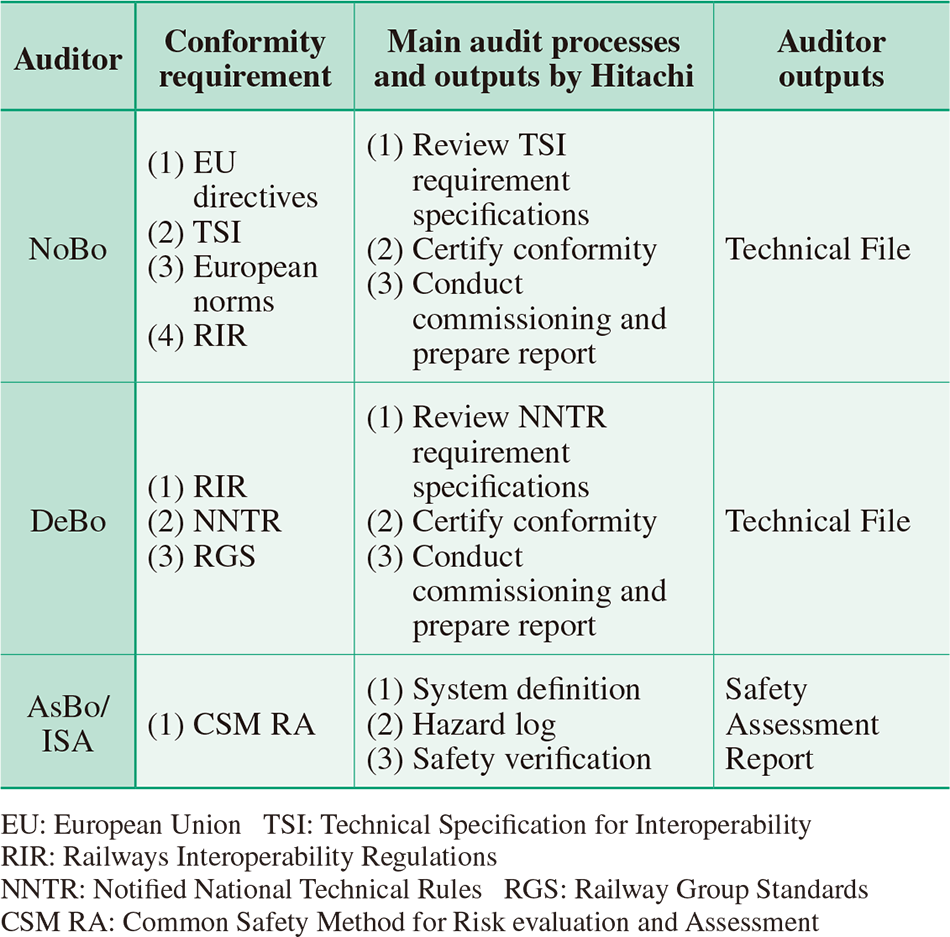 Third-party certification agencies audited the outputs from Hitachi to certify conformity to the applicable standards.

Obtaining operational authorisation from the ORR was a prerequisite for the rolling stock fitted with Hitachi onboard ETCS equipment to operate on the Cambrian Line. This required obtaining the GP equipment, GA equipment, and SA certifications before submitting the associated documentation to the ORR for their checking. This section describes the process for obtaining SA certification and, with reference to this, the activities leading up to obtaining operational authorisation.

As the onboard ETCS equipment itself already had GP and GA certification, a review of the commissioning specifications (for ETCS static and on-track commissioning) was conducted with NR and WCR. Hitachi was then required to specify what function should be checked as part of the SA certification work. Then the actual commissioning was conducted. After that, HRE submitted the results of this commissioning in the form of a report so that the NoBo and DeBo could assess the case made for conformity and the appropriateness of the associated evidence. The record of the results were stored within a “Technical File”.

To comply with the CSM RA, HRE undertook a risk analysis and safety review for each component covering the onboard ETCS equipment and rolling stock installation, and then used the results of these as the basis for determining the specific items and safety requirements that needed to be considered. It also clarified how these safety requirements were to be checked. Evidence that these processes were being followed and that safety requirements were being met in accordance with these checks was submitted, and the AsBo and ISA conducted their audits. The AsBo and ISA recorded the results of these audits in a “Safety Assessment Report”.

Once the above audits were completed, the rolling stock certification audit reports (Technical File and Safety Assessment Report) were submitted together with accompanying documentation to the ORR, which audited them for operational authorisation. As a result of this audit, Hitachi received APIS for Class 37 locomotives fitted with Hitachi onboard ETCS equipment to operate on the Cambrian Line in July 2016. This was the first operational authorisation in the UK for onboard ETCS equipment that works with wayside ETCS equipment from other vendors, and this was accomplished ahead of Hitachi's European competitors.

Hitachi was the first company in the UK to complete the steps from manufacture and supply of onboard ETCS equipment to obtaining operational authorisation in the form of a turnkey project. The work undertaken in this project can be seen as a model for the rollout of ETCS, which the UK plans to adopt widely in the future, not only for Hitachi, but also for its UK customers and certification agencies.

As a non-European company, the successful development of onboard ETCS equipment as an interoperable product can be seen as a significant achievement for Hitachi. This experience has built confidence with regards to the possibilities of further expansion into ETCS markets.

During the project and work on gaining certification of conformity to standards, considerable assistance with obtaining operational authorisation to use the standard European railway signalling system in the UK as described in this article was received from everyone involved, especially Anthony Wilkinson of Network Rail and Matthew Bott of West Coast Railways.