As the future optimization of social infrastructure systems by its Social Innovation Business will require the solution of combinatorial optimization problems, Hitachi has proposed a complementary metal-oxide-semiconductor Ising computer based on a new paradigm of computing technology that is capable of solving such problems efficiently using an Ising model. Until recently, Hitachi has been prototyping a 20,000-spin Ising computer chip as a first-generation prototype fabricated using a 65-nm process. This has now been followed by a second-generation prototype that uses a field-programmable gate array. Along with this hardware, Hitachi is also making progress on developing the software techniques that will be needed for the practical application of complementary metal-oxide-semiconductor Ising computers. It has developed a graph embedding technique for embedding complex real-world problems into a simple and ordered hardware configuration, and has demonstrated how this technique can be used to load problems into an Ising computer much faster than the conventional technique. 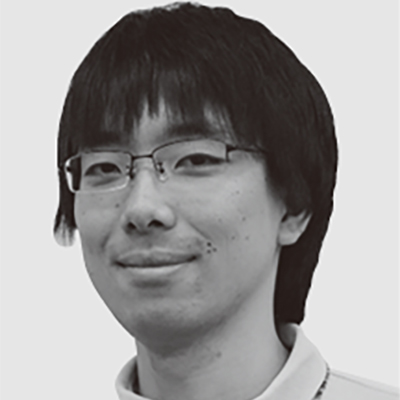 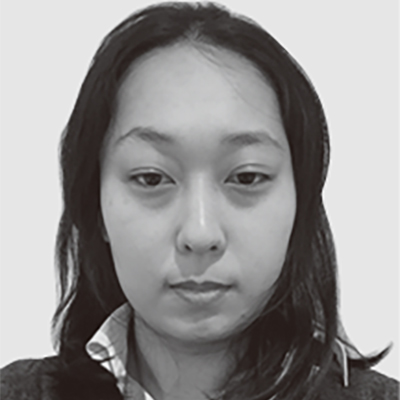 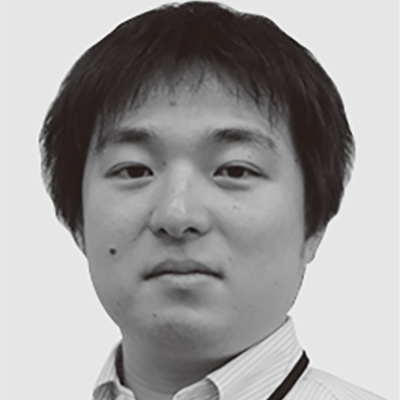 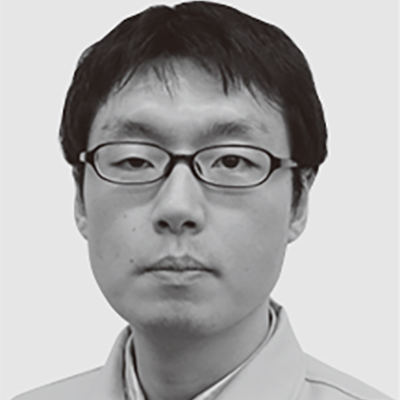 Social Innovation will be essential to realizing the ongoing progress of society and to providing a more comfortable way of life in the future. Achieving this will require a combination of advanced information technology (IT) and infrastructure technologies for building a prosperous society. As epitomized by the supercomputer, the focus in IT to date has been on performing large numbers of numerical calculations. However, achieving Social Innovation will require the optimization of social infrastructure systems. Transportation systems, logistics systems, and electric power grids, for example, need to optimize vehicle movements, delivery routes, and power flows, respectively. Optimizing these systems involves solving what are known as “combinatorial optimization problems,” something that conventional computers have difficulty achieving efficiently.

In response, to provide the computing techniques needed to achieve Social Innovation, Hitachi has developed a new paradigm in computing technology that can efficiently solve combinatorial optimization problems. This article describes this new computing paradigm.

Solving combinatorial optimization problems using existing computing techniques involves breaking the problem down into programs (procedures) that can then be executed sequentially. Unfortunately, the explosive growth in the number of candidate solutions that occurs as the parameter count increases also results in a dramatic increase in computing time.

This section describes the Ising computer, a new paradigm for solving combinatorial optimization problems, and the complementary metal-oxide-semiconductor (CMOS) Ising computer that Hitachi is proposing to build.

An Ising model represents the properties of ferromagnetic materials in terms of statistical mechanics. It consists of a lattice of points (spins), each of which can occupy one of two orientation states, and reaches stability when the energy H is at a minimum, taking account of interactions between adjacent points in the lattice.

Hitachi has proposed a technique using Ising models (statistical models that represent the behavior of spin in a magnetic material) as an efficient technique for solving combinatorial optimization problems.

Figure 1 shows an Ising model. The model is expressed in terms of magnetic spin states (σi), which indicate the properties of a magnetic material and can be oriented either up or down; interaction coefficients (Jij), which represent the strength of the interactions between different pairs of spin states; and external magnetic coefficients (hi), which represent the strength of the external magnetic field. The figure also includes the equation for the energy (H) of the Ising model.

In an Ising model, the spins shift to the states that minimize this energy, H. Mapping a combinatorial optimization problem onto an Ising model in such a way that the problem's performance index corresponds to the model's energy, and then allowing the Ising model to converge, results in the spin states adopting the minimum-energy configuration. This is equivalent to obtaining the combination of parameters that minimizes the performance index of the original optimization problem. 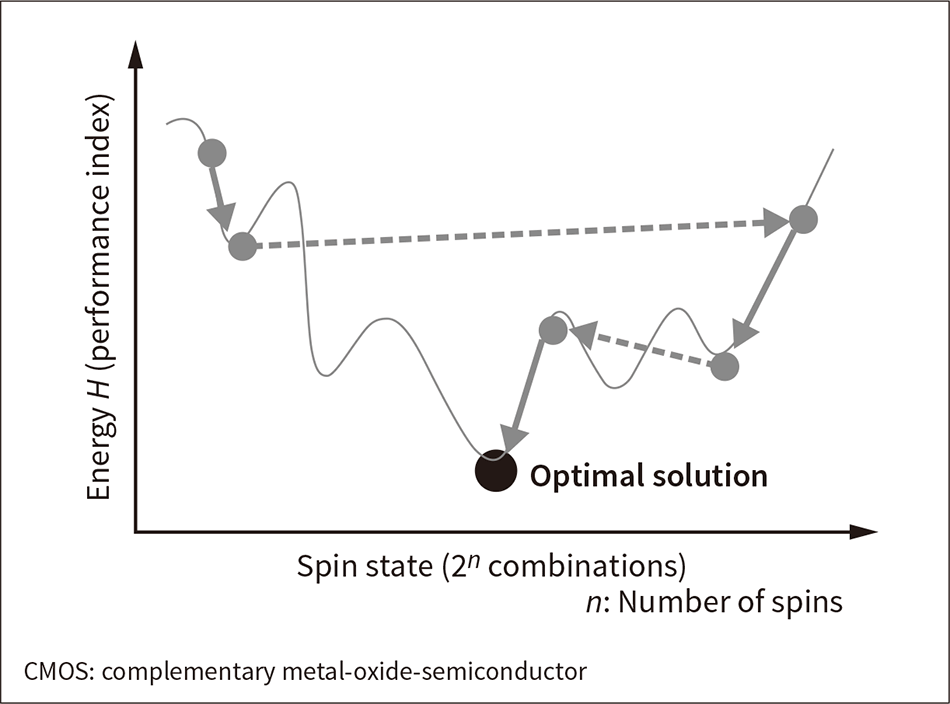 In a CMOS Ising computer, although the energy falls in accordance with the energy landscape due to the interactions between spins (solid arrows), there is a potential for it to get trapped at a local minimum. This can be prevented by inputting random numbers to deliberately invert spin values (dotted arrows). The result is to obtain a solution with low energy.

In an Ising model simulation circuit, the interaction between spins causes the energy of the Ising model to fall in a way that is determined by its energy landscape (see Figure 2). However, because this landscape contains peaks and valleys (as shown in the figure), operating on its own, this process of interaction has the potential to leave the model trapped at a local minimum that is not the minimum energy for the whole system. To escape such local minima, the spin states are randomly perturbed. This causes the system to randomly switch to an unrelated state as indicated by the dotted line in the figure. Collectively, these two processes are called CMOS annealing. By using them, it is possible to identify the state with the lowest energy that can be found.

In practice, this use of random numbers means that the solution obtained is not necessarily the optimal one. However, when the computing technique is used to make improvements to social infrastructure systems, it is likely that it will not matter if the results obtained are not always optimal. When determining delivery routes, for example, it is unlikely to matter for the purposes of system optimization if the total route is slightly longer than it might have been.

A prototype was manufactured to test the operation of the proposed CMOS Ising computer(2). The first-generation prototype took the form of an Ising chip fabricated using a 65-nm CMOS process, demonstrating the scalability of the CMOS Ising computer. The second-generation prototype was implemented on a field-programmable gate array (FPGA), a type of large-scale integration (LSI) semiconductor that is reconfigurable. It was used for the development of the technologies required for practical application. 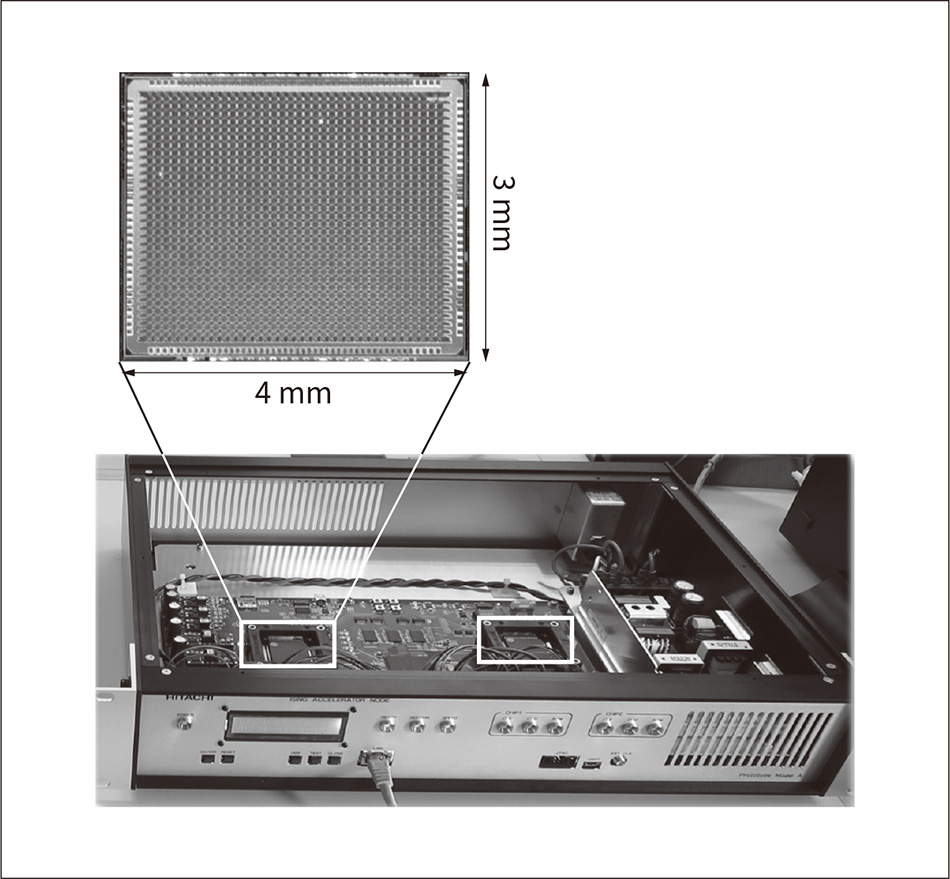 This prototype Ising chip was fabricated using a 65-nm CMOS process (see Figure 3). The 3-mm × 4-mm chip can hold 20,000 spin circuits. The interaction process for updating spin values operates at 100 MHz. The figure also shows a prototype Ising node fitted with two Ising chips. The Ising node can be accessed from a personal computer (PC) or server via a local area network (LAN) cable to input optimization problems and obtain the solutions. 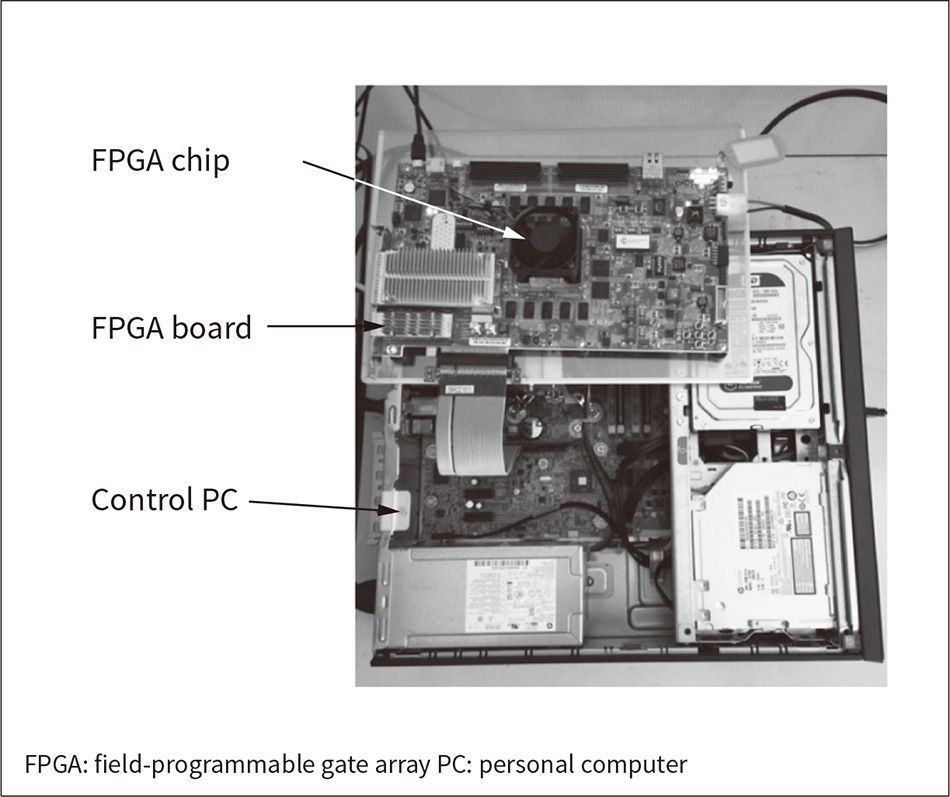 The Ising computer is implemented on an FPGA. Being reconfigurable means the computer can take on many different configurations.

Figure 4 shows the second-generation prototype. It uses an FPGA (a reconfigurable LSI semiconductor) to enable flexible updating of the Ising model topology, meaning the interaction coefficient ranges and interactions between spins(3), (4). The prototype enables the development of software and other associated technologies that will be needed for the practical application of CMOS Ising computers. 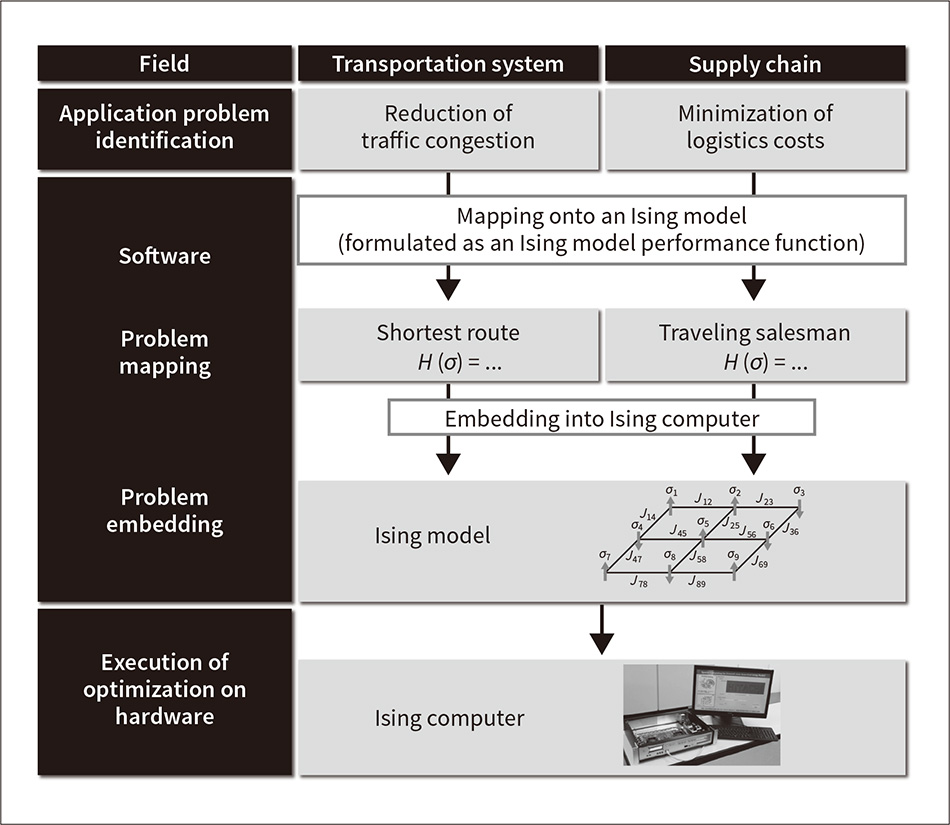 Figure 5 shows the technology layers required for using an Ising computer to solve real-world problems. There is an application layer that identifies problems to be solved from actual social infrastructure systems, a software layer that makes it possible to input these problems into the Ising computer hardware, and a hardware layer that performs the actual computation.

The software requirements include mapping techniques for formulating the optimization problem as an Ising model energy function, and graph embedding techniques for converting the topology of the resulting Ising model into a topology for the actual Ising computer hardware. As mathematical knowledge is needed for the development of these software techniques, Hitachi undertook this work in partnership with Hokkaido University through the Hitachi Hokkaido University Laboratory Project established in 2016. The development of these software techniques was also enabled by making good use of the second-generation prototype described above.

The interactions between spins in an Ising model that has been mapped onto a real-world problem are complex. However, the hardware constraints on a CMOS Ising computer mean it can only be configured with simple spin relationships. Take the case of a CMOS Ising computer that has a lattice graph (hardware graph) G with diagonal lines as shown in Figure 6 (a). The second-generation prototype has more complex interactions than graph G. Whereas the maximum order of graph G is 8, the maximum order of graph H in Figure 6 (b) is 10. Moreover, graph H is not a subgraph of graph G and its Ising model cannot be represented as-is on the CMOS Ising computer.

One method proposed for overcoming this problem is to substitute multiple vertices for a single vertex(5). This generates graph H', shown in Figure 6 (c), by breaking down vertex vi in graph H to two vertices vi, 1 and vi, 2. This set of replicated vertices is called the vertex set φ (vi) for vertex vi. If the interactions between the vertices in φ (vi) are set appropriately, the spin values for the base state of the Ising model for graph H are the same as those for graph H'. The maximum order of graph H' is 6, and it is a subgraph of graph G. Generating the vertex set in this way means the graph can be converted without changing its base state, thereby making it possible to embed the Ising model in an Ising computer.

Because an ordered model structure is a prerequisite for representing a large Ising model as a semiconductor circuit in an Ising computer, graph conversions that use vertex partitioning are unavoidable. However, the conversion increases the number of spins, so it is essential to minimize vertex partitioning as much as possible if large problems are to be solved. That is, an embedding algorithm is needed that can minimize vertex partitioning when presented with a graph such as the one in Figure 6 (a) that has non-trivial embedding. Hitachi has proposed one such technique, called contractive graph minor-embedding (CGME)(6). Figure 7 shows the relationship between graph size and the time taken for embedding. Use of CGME speeds up graph embedding by more than two orders of magnitude compared with the conventional method(7). 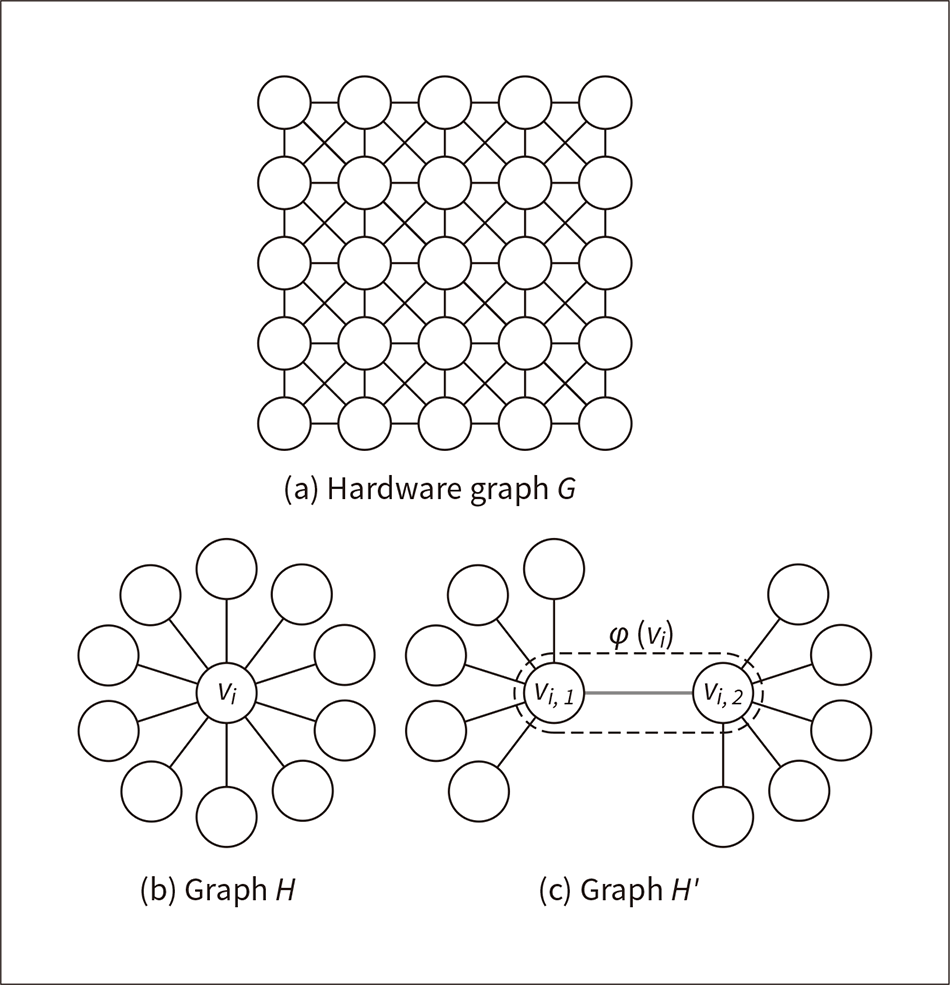 A complex Ising model can be embedded into a simple and ordered hardware configuration by substituting multiple spins for a single spin. 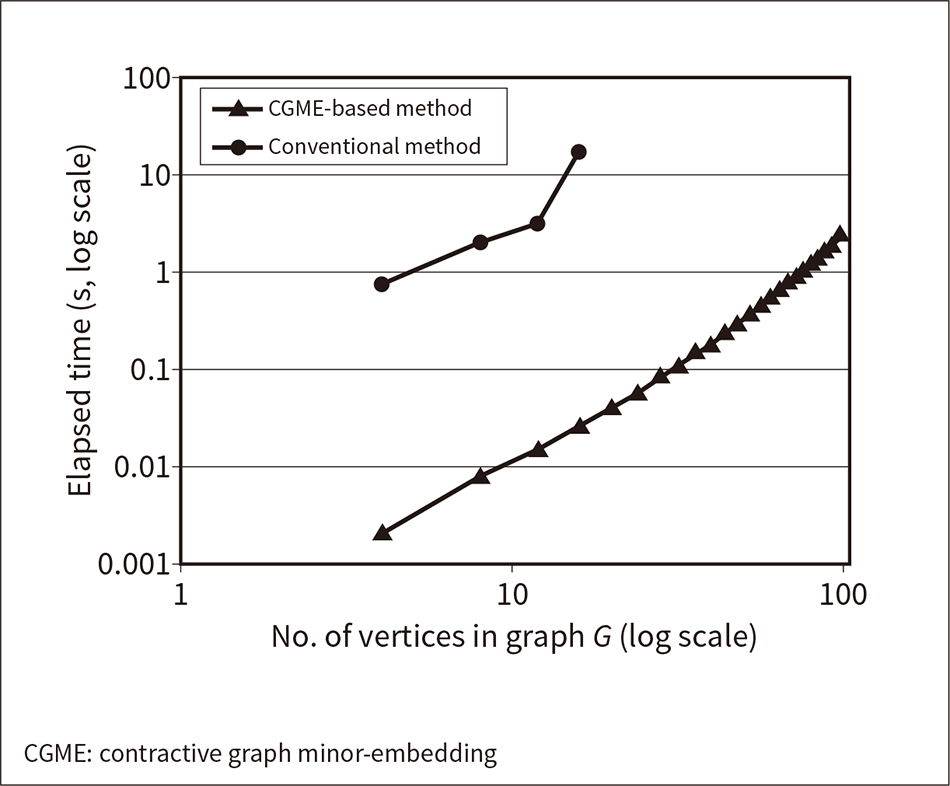 Use of a newly developed algorithm speeds up embedding by more than two orders of magnitude compared with the conventional method.

While the solutions obtained are not absolutely optimal, they are adequate for making improvements to social infrastructure systems, and the semiconductor-based approach adopted by Hitachi has significant engineering benefits in terms of ease-of-use and scalability. The practical application of CMOS Ising computers requires not only hardware technology, but also software techniques for using the hardware. Along with using an FPGA to build a second-generation prototype to accelerate software development, Hitachi is also making progress toward practical applications by developing software techniques for embedding complex real-world problems in ordered Ising computer hardware.