Hitachi has developed the NEXPERIENCE methodology for collaborative creation with customers based on design thinking and utilized it in more than 300 projects to date. When engaging in collaborative creation with leading companies from a variety of industries, NEXPERIENCE enhances the quality of workshop activities, such as formulating a vision for the future, generating ideas, and designing a business model. It also contributes to work with partner companies on innovative business development, such as a new insurance service aimed at leveraging Hitachi technologies to resolve social issues.

To accelerate the process of innovation, it is important not only to acquire an accurate and in-depth understanding of the issues facing customers, but also to generate ideas that draw on knowledge from across different industries. This is achieved through the deployment of new techniques for analyzing customer challenges that combine the use of ethnographic research to identify workplace issues with business dynamics to identify management issues. Hitachi is also further developing its methodologies, including a technique for characterizing and recommending examples of services that have been successful in other industries.

In the future, Hitachi plans to establish innovation design methodologies by further enhancing these techniques, such as through the use of artificial intelligence (AI) to support idea generation and business model design by people. 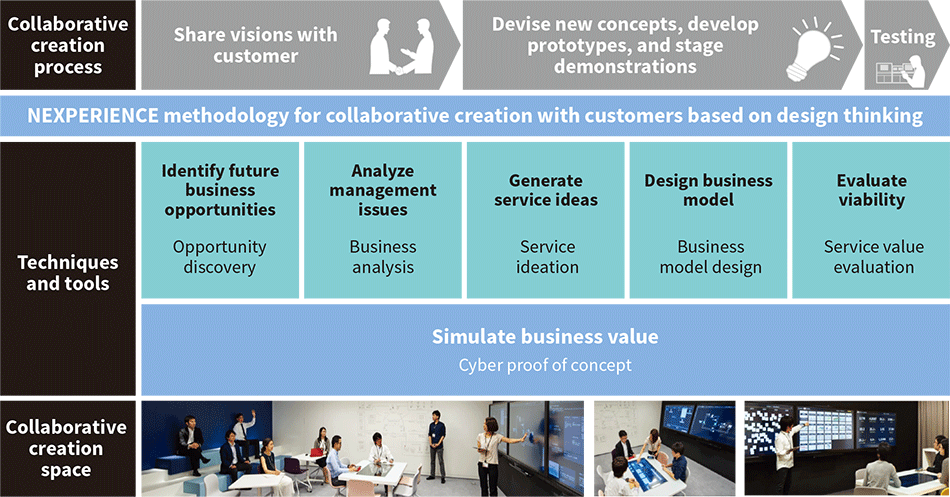 The Insights Laboratory was established in April 2017 to accelerate the delivery of innovative new solutions for Lumada, Hitachi's Internet of Things (IoT) platform, using advanced analytics, artificial intelligence (AI) capabilities, and the NEXPERIENCE collaborative process. The Insights Laboratory is comprised of a global team of researchers and designers from Hitachi's Global Center for Social Innovation and researchers who are involved in Hitachi AI Technology, voice/video recognition, natural language processing, and operational technologies (OT) from the Center for Technology Innovation, working in close collaboration with the Hitachi Vantara, Hitachi Consulting Corporation (HCC), and front business units (BUs) to drive a global, unified IoT business and go-to-market strategy. The Insights Laboratory team is focusing on agile co-creation of digital solutions with customers and partners in every phase of the development cycle. From ideation and incubation to system design, architecture, and proof-of-concept and -value, the Insights Laboratory team is committed to delivering positive business and societal outcomes for Hitachi customers. 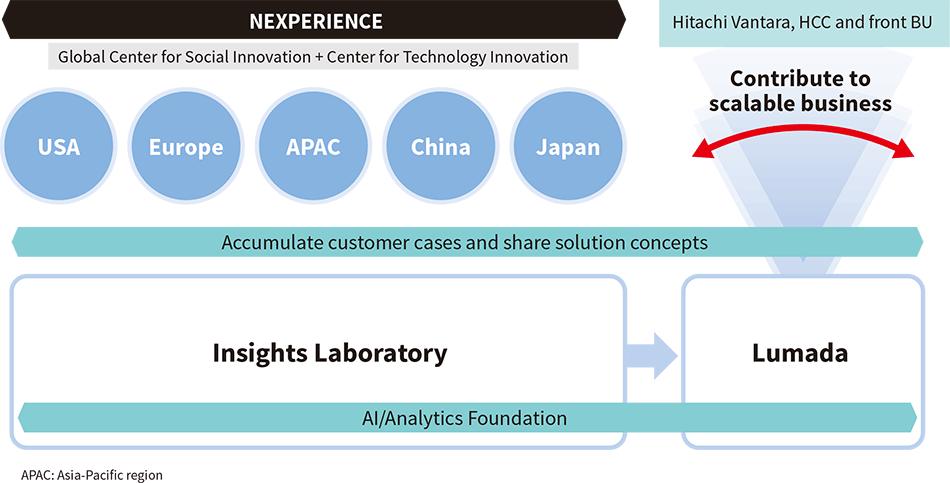 3. New London Office for Co-creation of Digital Solutions in Europe

A new customer co-creation hub of the Global Center for Social Innovation-Europe was established in London, UK. This new dedicated research facility will offer Hitachi's NEXPERIENCE collaborative creation process for the development of innovative solutions together with business partners. It is the second regional NEXPERIENCE/Space outside Japan.

The location of this NEXPERIENCE/Space in London was chosen for its accessibility for customers and partners both in UK and from continental Europe. It will strengthen Hitachi's business structure to achieve further growth through the global rollout of its Social Innovation Business using digital technologies.

This new facility is designed to stimulate and drive “radical innovation,” in which designers and researchers will pursue collaboration projects with our customers and partners by offering a structured innovation process (NEXPERIENCE) and a unique blend of advanced research, data analytics and vision/service design expertise to solve challenges that will be faced by matured societies. Along with the sustainable development goals (SDGs) adopted by the United Nations, the Japanese government has also proposed “Society 5.0” as a new concept for society. Presented in the 5th Science and Technology Basic Plan published by the Cabinet Office, the idea is to use information and communications technology not only to enhance economic efficiency, but also to create a more vibrant society for people to live in. However, the advance of digital technology in recent years has led to greater diversity in people's attitudes and how they relate to society, such that it is no longer easy to get a clear picture of what form societal systems should take. Hitachi intends to contribute to Society 5.0 in its role as an innovation partner for the era of the Internet of Things (IoT) by presenting specific ideas about the social infrastructure systems of the future and leading the debate about what forms these systems should take.

Vision design* works by using the concerns of people as a starting point for identifying problems, coming up with examples of technologies and services for resolving these problems, and using this to seek out the desired ways in which people and technology can interact. While numerous smart technologies have been developed in recent years, there remain problems in people's daily lives that are not solved by these technologies, as well as other problems that have arisen because of them. By presenting problems from this personal perspective, the aim in vision design is to consider social infrastructure systems that go beyond merely being smart by also having humanity (see Figure 4.1).

One example is the “Ageing with me” vision notable for involving a communication robot that operates in the home, in which vision design was used to identify problems from the consumer's perspective and generate hypotheses for how to resolve them. This vision assumes a future society in which the use of data analysis is widespread and individuals are provided with numerical probabilities regarding their risk of disease. While this is not a future that Hitachi is hoping for, by presenting a possible future to highlight problems that people may be confronted with, it serves as a way of clarifying the issues to be considered when dealing with new social infrastructure systems. The process then considered the problem of the unassuageable concerns felt by the elderly who are aware of the probability of suffering from dementia and came up with the idea of a robot that is able to detect even minor signs of dementia. In terms of what interactions between people and technology would help to deal with the problem, the idea encompasses the following three features (see Figure 4.2).

The first is that it would encourage elderly people living alone to speak more. In this case, the robot would not merely wait for instructions from the user, such as to do the shopping, but instead would be equipped with an extensive range of expressions that would encourage users to converse with it. The second is the ability to notice even small changes in behavior. After spending long periods of time together, the dispassionate evaluation possible by a robot would allow it to notice small behavior changes, the sort that people would become accustomed to and thereby overlook. The third feature is that its role would gradually change. The robot would not be brought into the home solely as a specialist device aimed at preventing dementia. A robot that starts out providing assistance with the shopping or with taking medicines could gradually shift its role toward easing the progression of dementia. In this way, the technology could operate alongside the user and serve to help resolve problems in ways that only technology can.

By envisaging the problems that people will face in the future world and how they can be resolved, visions that feature technologies that would be difficult to implement at present, this process provides a way to determine how best to provide social infrastructure systems and to identify areas for research and development (see Figure 4.3).

4.1. Block diagram of vision design and material available on the website 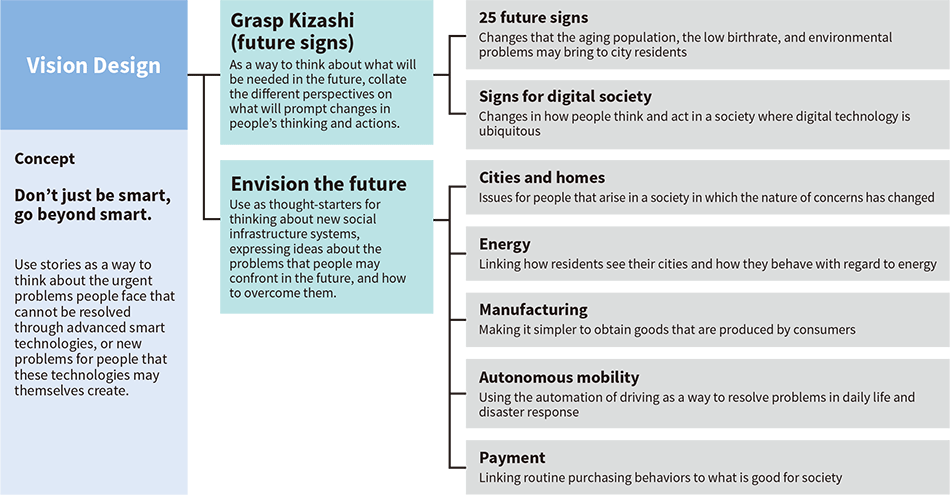 4.2. How technology and interaction are used in the “Ageing with me” vision that deals with concern about dementia

4.3. Vision for how technology can operate alongside people in a society where unassuageable concerns are becoming more commonplace

5. Collaborative Creation with Customers for Port Security in Europe 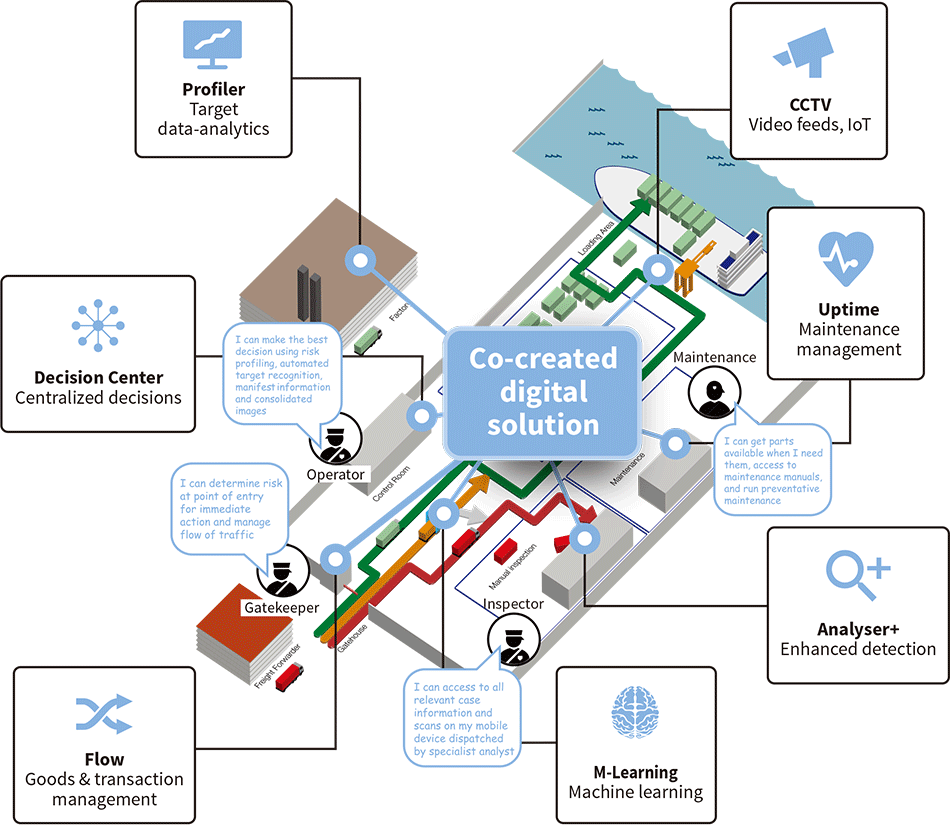 Customs and border control is under unprecedented pressure to keep society safe due to increases in passenger numbers, goods volumes, terrorist threats, and contraband. Hitachi Consulting, Hitachi Europe Ltd., and a security client are collaborating to digitally transform the security operations industry. This is a social innovation that will benefit everyone.

Bringing together a multitude of user experts has enabled project members to gain a deep understanding of the problem. Ethnographic user research and multiple workshops clarified the challenges for traditional security service operators. Unprecedented collaboration was made possible by co-creating a revolutionary digital solution that can ingest and integrate data from various independent sources, deployed on a device-agnostic basis. Detection device outputs can be aggregated and operated remotely, underpinned by machine learning to continuously improve and risk profiling capability which simultaneously drives increasing operational efficiency.

The developed solution will offer new business opportunities as it can be applied to other security businesses. Our client is undergoing a digital transformation and we are proud to support the approach to bring a revolutionary business model to market that will have a positive social innovation impact.

Improving the efficiency and reliability of hospital management is becoming an issue in China, where steps are being taken to utilize private investment to improve the quality and quantity of its healthcare as the government seeks to achieve its Healthy China 2030 plan.

Through the collaborative creation of solutions that integrate its information systems and knowledge of hospital operations, Hitachi is helping to raise hospital revenues by increasing patient satisfaction and making hospital operations more efficient. For the establishment of a positron emission tomography - computed tomography (PET-CT) scanning center, Hitachi used an analysis of patient needs based on operational know-how to work with the hospital through collaborative creation, and produced a spatial design that increases satisfaction for patients and their families. Hitachi is also developing software tools for using the data held in various hospital systems to calculate operational key performance indicators (KPIs), such as time-required, and to present these in a time-series format or based on work flow. Using these tools to identify bottleneck tasks and areas where improvements are needed, Hitachi is acting as a partner of hospitals supporting their sustainable management by improving operational efficiency and supporting the formulation of potential improvements.

6. Overview of the operational support solution for Chinese hospitals