Despite the need for a transformation toward high-productivity work styles, no definitive solutions currently exist. Work styles will continue to become increasingly diverse, resulting in the disappearance of commonly sought job features, in favor of more uncommon ones. Hitachi has developed an application called Happiness Planet that respects employees’ personal motivation to work better, and helps improve work styles in an enjoyable manner. It has been tested in a public PoC involving 1,475 participants from 62 companies. The application’s strong point is that it lets users declare small daily challenges related to their work styles, and provides feedback on results in the form of objective indicators such as happiness level. As a result, 67% of participants in the public PoC reported voluntarily performing a work style challenge, and the participation rate remained at around 70% over two weeks. These findings indicate that the application is effective at encouraging initiative and sustained motivation. 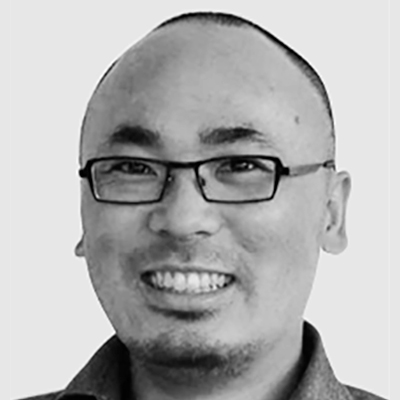 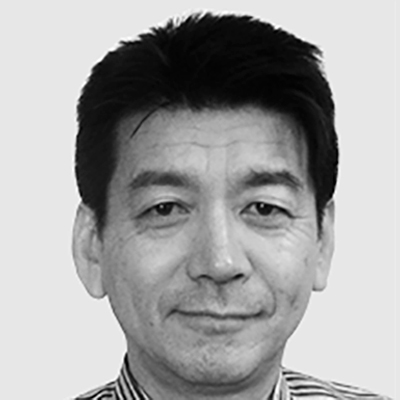 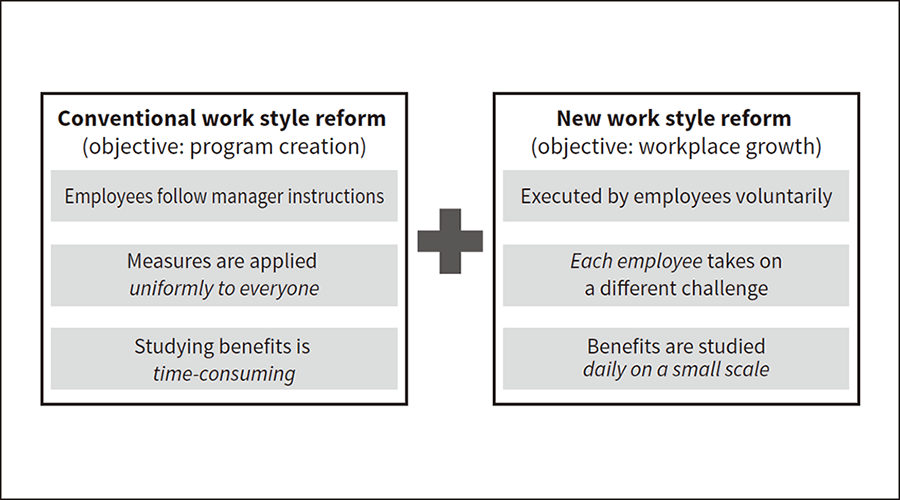 Along with designing programs, companies also need to create systems that help employees grow in the workplace.

Many companies have started working on work style reforms designed to improve productivity. These efforts are led by measures to correct excessive working hours and create work environments that can balance household and work needs(1). They are being implemented mainly by creating programs to support work styles with higher levels of health and freedom. Corporate culture reform is expected to be the next step, but there are currently no definitive solutions addressing the issue of methodology. Digitalization and Japan’s declining population are creating major changes in working conditions, and today’s increasing diversification is creating the need for companies to create systems that will allow each employee in the workplace to grow by independently assessing the direction they need to take. Since 2004, Hitachi, Ltd. has used clip-on sensors to gather and analyze data from more than 10,000 subjects on workplace communication and organizational activation levels (happiness levels)(2). Happiness level is an indicator representing an organization’s degree of lively activity. It is measured from physical movement. Hitachi found that workplaces with high happiness levels have high productivity as a result of sharing tendencies such as delegating authority and taking on new challenges(3). But it also found no common features among specific methods for raising happiness levels. Some workplaces had higher happiness levels on days when workers started work early, while others were the opposite. Some workplaces preferred days with high levels of verbal interaction, while others did not. In other words, the best method of activating a workplace varies depending on its culture and the nature of the work being done. As a result, this method will only be discoverable through trial and error.

Hitachi has responded by developing a support application called Happiness Planet, which is used to set reform targets for new work styles that will assist workplace growth, and to help employees achieve personal growth (see Figure 1). This article presents an overview of the application and a proof of concept (PoC) project carried out for it by 1,475 participants from 62 companies. 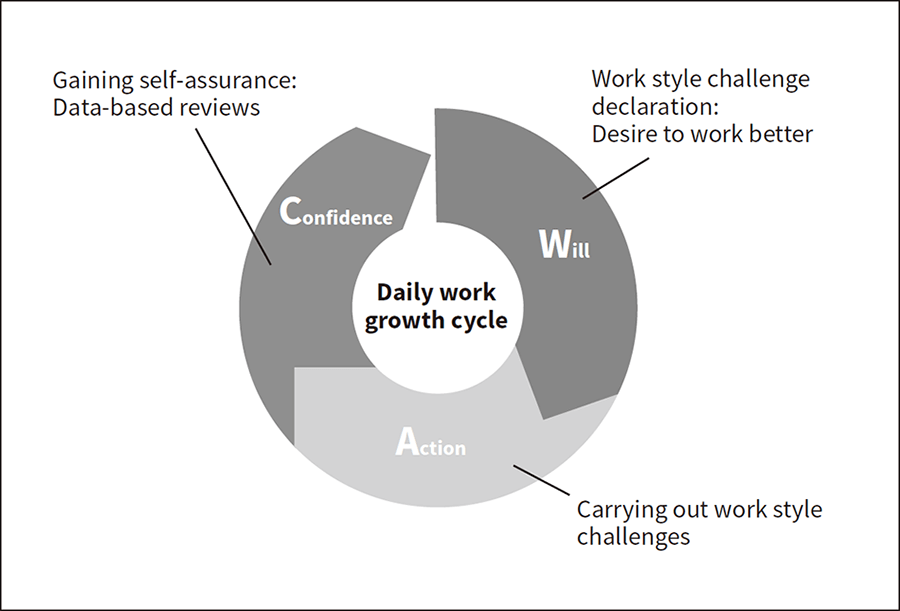 Using their pre-existing desire to work better (Will) as the starting point, each employee tries to achieve work growth by repeatedly acting on that desire (Action) and gaining self-assurance (Confidence) every day.

Hitachi proposed a Will-Action-Confidence (WAC) model as the basic concept for the design of an application created to let employees voluntarily change their work style (see Figure 2). The approach is based on the assumption that each employee has a pre-existing desire to work better (Will). It respects that Will and attempts to motivate improvement by harnessing it. Here the term Will is used to mean the active desire to make some degree of improvement in job quality, whether by taking steps to end meetings on time, creating materials in a way that ensures reader ease of understanding, or seeking assistance from experienced employees when given a new task. The traditional procedure for company-led job task improvement activities has usually been to first use surveys to uncover issues and then decide on response methods. In terms of the WAC model, this procedure starts with the Action step. Employees tend to feel jobs are forced on them, or feel inundated with extra work. Under the proposed model, employees use their desire for improvement (Will) as the starting point, they act on that desire (Action), and gain self-assurance (Confidence) by doing so. This process helps motivate employees to take on the next new challenge. By repeating these steps, employees can be expected to change their work styles proactively.

To verify the WAC model concept, 10 teams from the Hitachi Research and Development (R&D) Group carried out a PoC called the Happiness Challenge. The PoC was done in the form of a game with the following rules: The PoC lasted three weeks. During the first week, the team members performed their job tasks as usual. During the second and third weeks, each team devised and carried out one unique work style challenge. Happiness levels measured by clip-on sensors were ranked by degree of change relative to the first week, and the team with the most improvement was the winner. The administrative department provided operational support as part of Hitachi's work life innovation efforts. The department evaluated whether the work style challenges devised for the PoC were performed proactively, and whether team members were able to continue each challenge enjoyably without losing interest.

When ranked by degree of change in happiness level, the top three work style challenges chosen by the teams were: (1) doing about 10 minutes of light exercise every day, (2) moving to a different work location when desired, and (3) engaging in daily greetings and high-fives in the workplace.

When interviewed, participants from nearly every team reported finding the challenges enjoyable and doing them proactively, suggesting that the concept is valid. Hitachi attributed these findings to several reasons. Namely, the participants were allowed to devise the work style challenges themselves, they were instructed to make the challenges as unique as possible, and performing the PoC in the form of a game scored by an objective evaluation criterion (happiness level) was effective. Certain types of work style challenges also seemed to be more effective than others. Challenges that did not depend on job type or job duties (physical activity, taking breaks, and engaging in workplace communication) may have been more effective than challenges related to skill competency (such as methods of creating materials or giving presentations).

Designed to conform with the WAC model, Happiness Planet lets users declare and perform work style challenges proactively. It was created with the look of a team-play video game with the aim of enabling ongoing enjoyable use.

Choices were presented to users when they declared work style challenges each morning. Users could select whichever challenge they wanted, tailoring their choice to the job tasks ahead of them that day.

Drawing on the findings of the in-house PoC, Hitachi developed a smartphone application called Happiness Planet that lets individual employees perform work style challenges without administrative department support. This application was used to hold simultaneous work style challenge events. Teams of about 10 members competed in events that lasted two weeks each. The application was created with the look of a video game, with teams represented as the crew of a space ship that has descended to pioneer a new planet. The PoC rules used the same method of determining the final ranking from happiness levels over the two weeks. Happiness levels were measured by a simple measurement technology embedded in the application and driven by the smartphone’s accelerometer.(4). This technology was used to gather body rhythm data on a server. The data was aggregated to calculate each team’s happiness level.

Users were asked to perform the following activity items each day:

Figure 3 shows example application screens. The application was designed to conform with the WAC model. It has screens for declaring a work challenge, for recording happiness levels and job task particulars while working, and for providing data for reviews. Users scored points in the application by performing the activity items above, causing the planet displayed on the top screen to grow. When declaring a work style challenge each morning, users could select from among the choices provided (see Table 1) or set their own challenge.

The application’s design prioritized the following: (1) having users declare work style challenges proactively, and (2) making continued use enjoyable for users. These characteristics were designed to ensure that users would take part voluntarily without feeling compelled by others, making it easy for them to gain self-assurance. Hitachi also felt that making the application entertaining was important since the WAC model’s ongoing repetition of small cycles every day is important for employee growth. In contrast, whether or not users managed to perform work style challenges was not considered important for the daily results since selecting only easy challenges to increase completion rates was of little value. What was considered most important was for users to approach their work with the conscious awareness that they would attempt the day’s challenge.

To check whether the application could provide the targeted benefits, it was subjected to a PoC by calling for participants from among the general public. The PoC was advertised through trade shows and news releases. Hitachi held a demonstration test over two weeks (February 8 to February 21, 2018), and ultimately obtained 1,475 participants (117 teams) from 62 companies as a result.

As described in Section 4.1, the application was evaluated for its two aims: (1) proactivity and (2) sustained motivation. A check of the activity state changes over the two weeks recorded in the user log indicated that challenge declarations maintained a level of about 70% throughout the period, demonstrating that users maintained their motivation to participate (see Figure 4). A questionnaire given out after the PoC showed that a large percentage of all participants (67%) were highly motivated to perform each day’s work style challenge, demonstrating that they attempted the challenges proactively instead of passively (see Figure 5). Taking part in the PoC was also reported as enjoyable by 54% of the participants. The specific reasons given suggest that users enjoyed making work style reforms. They reported being able to create work styles more oriented to daily targets, were encouraged by the game points awarded for performing work style challenges, found that the display of team work style challenges created an atmosphere of mutual support, and found there were more opportunities for discussions among participants from the same workplace. These findings demonstrate the application’s effectiveness at achieving its two aims (employee proactivity and sustained motivation).

Throughout the two-week period, about 70% of participants declared a challenge in the morning, demonstrating there was no decline in motivation to take part. The success rate for challenges remained at around 50%, indicating that suitably difficult challenges were selected.

Figure 5—Responses to Survey After Test 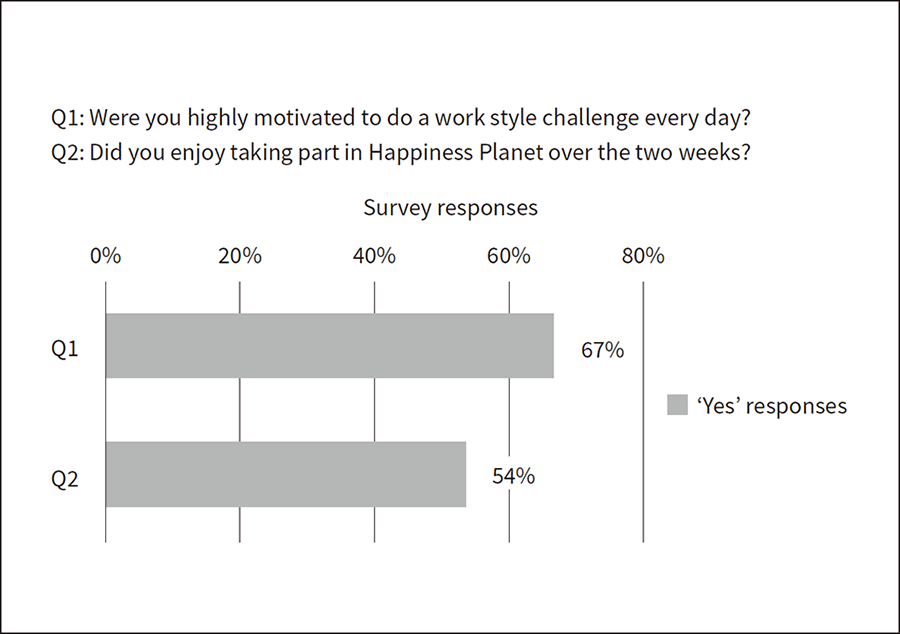 This era of change is creating the need to study work styles from both management and personnel strategy perspectives, while accumulating a portfolio of practices. Since employees themselves best understand the needs of their workplace, assisting employee growth should help increase the potential for corporate productivity improvement. By designing processes for enjoyably gaining work experience every day, Hitachi believes that Happiness Planet encouraged users to take part in planning proactively while respecting their individual will. It plans to continue refining applications and services to enable greater contributions to a large number of workers.