Relay interlocking system at the Yangon Central railway station in the Republic of the Union of Myanmar is aging, having first entered service approximately 60 years ago, predating the military regime. A contract for the supply and installation of level crossing equipment and an electronic interlocking system was signed in May 2015 as part of a grant aid project of the Japan International Cooperation Agency (JICA), with the official opening taking place in June 2018 (the level crossing equipment commenced operation in October 2015).

Although the project included difficult work, involving the upgrading of the railway's signaling system and 81 sets of points without interrupting train services with the existing signaling system, it was completed on schedule with no major incidents. Moreover, being the first signaling project to be undertaken in Myanmar, it is anticipated that it will contribute to the modernization of that nation's railways by serving as a standard.

After a hiatus of approximately two years, work will resume in 2020 with the planned delivery of train monitoring systems (TMSs) for 20 stations. 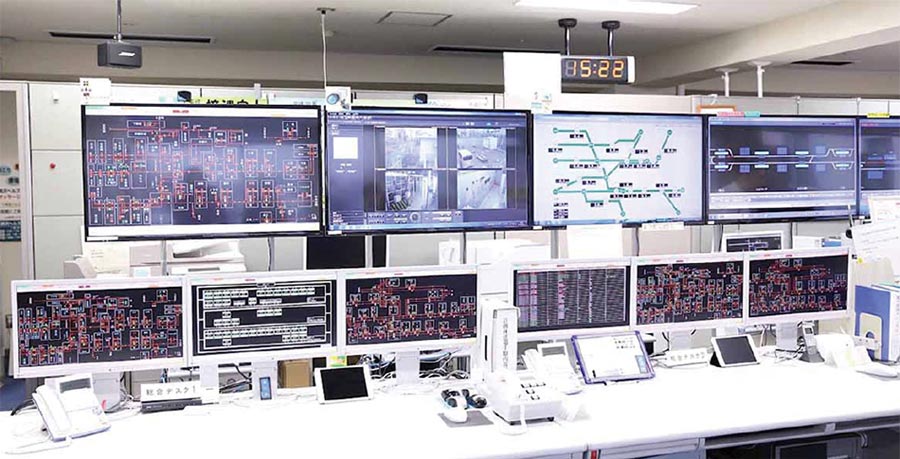 Hitachi was engaged to upgrade both the central and remote equipment for the system, which had been in service for more than 25 years, to improve its reliability and expandability. For reliability, a backup system was installed at a separate site to the main control center so that it would be available to handle monitoring and control in the event of main control center functions being lost during a disaster or other incident. Similarly, portable operation consoles were provided for shared use between a number of posts to improve monitoring and operations performance at substations.

Additional functions were also provided for training drills and to assist control center staff, with the upgraded equipment commencing operation as required after the switchover to the new system in May 2016 and December 2017. The new system is contributing to improving the ability of control center staff to respond to incidents and faults and to faster recovery from incidents.

East Japan Railway Company and Hitachi have developed a maintenance vehicle location system to help keep maintenance work safe. The system tracks the location of road-rail vehicles with reference to the status of track closure managed by the Autonomous Decentralized Transport Operation Control System (ATOS) for the Tokyo region and issues a warning to any cars in sections that are dangerous to enter. The following three techniques are used for car positioning based on the type of car and where the unit is installed.

The rotary encoder technique entered service on the Saikyo Line in November 2017. It has helped improve the safety of maintenance work by eliminating hazards. 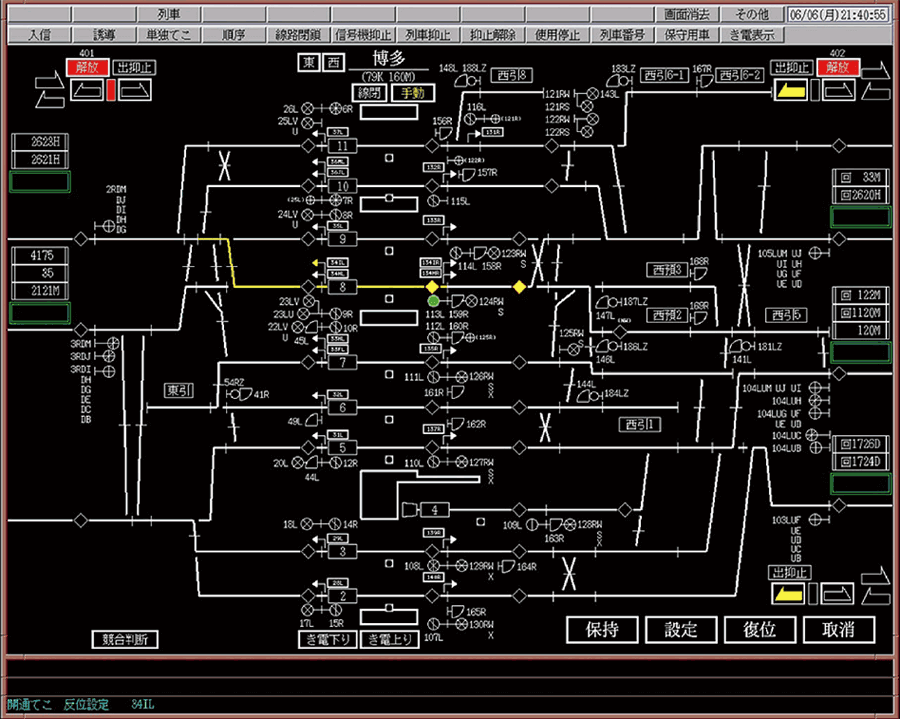 Made up of station information management, automatic traffic control, passenger information control, and electronic interlock systems, the Hakata Station System commenced operation in January 2006. This sophisticated system features online integration with centralized operational management of the railway line to control both train movements (traffic control) and the equipment used to deliver passenger information. In response to the aging of system equipment, Hitachi has undertaken the replacement of the station information management and automatic traffic control systems. The replacement project involved the following enhancements, the objectives of which included boosting system toughness, reducing costs, and improving operation.

(1) Station information management
The upgrade reduced costs by hosting the station information management and scheduling systems on the same hardware.
(2) Automatic traffic control
The system that manages current-day information was upgraded from a single to a dual system to boost system toughness, with advances in hardware performance used to increase capacity for maintenance journal storage. Ease-of-operation was also enhanced by improvements to screen operation, including switches for putting lines out of service, system monitoring screens, and timetable display. Following on from a November 2012 upgrade to the traffic management system for the Nankai Line that was undertaken to ensure punctual and trouble-free train operation and better passenger service, Nankai Electric Railway Co., Ltd. now intends to install a traffic management system for the Koya Line that currently does not have such a system. Currently under development, the system will manage services on the 63.6 km of the Koya Line between Namba and Gokurakubashi.

As for the Nankai Line, the Koya Line system will combine operations management with centralized traffic control (CTC). The system configuration is made up of a central controller and station interface units, with the control center and station systems being linked by an optical trunk. The central controller handles both management functions (including timetable management, human-machine interfaces, and operating statistics) and the main control functions (including train tracking, train movement control, and passenger information), while the station interfaces handle external interfaces that include input and output of interlock and service information, car identification number readers, and station consoles. The upgrade to the traffic management system for the Nankai Line included provision of space for a control center in anticipation of the installation of a traffic management system for the Koya Line.

System development is currently proceeding with a target of operation commencing in March 2019. The Central Japan Railway Company commenced operation of a prototype of the new N700S rolling stock for the Tokaido and Sanyo Shinkansen lines in March 2018. The prototype is being used for final testing of new technologies to be incorporated into future mass production rolling stock. In the future, it will also be used as a test vehicle for technical developments to enable further enhancements to the Tokaido Shinkansen.

Through a rigorous program of optimizing the location of underfloor equipment for the purposes of miniaturization and weight reduction, Hitachi has succeeded in producing a standard vehicle suitable for use on a variety of different railway tracks and with different train lengths, such as 12-car or 8-car configurations, while still retaining the current default 16-car design. This will provide Hitachi with the ability to supply customers in Japan and elsewhere with rolling stock of even higher quality, at low cost and in a timely manner.

Enhancements have been made to the shape of the N700-series lead car to further improve its environmental performance, with the adoption of the Dual Supreme Wing design developed using a simulation technique that takes account of its three-dimensional shape. The new rolling stock has been designed to have less running resistance through streamlining of the carbody and changes to its shape, also reducing noise when entering tunnels.

The traction system uses next-generation silicon carbide (SiC) semiconductors with low energy losses that are able to operate at high temperature, and has been made significantly smaller and lighter through the incorporation of a cooling technique that uses natural airflow. The bogies have also been made lighter, as well as more reliable and easier to manufacture, through changes to the bogie frame design that optimize the floorplate thickness.

Drawing on the results of operating trials using the N700S prototype, work is proceeding with the aim of delivering production rolling stock from around FY2020. 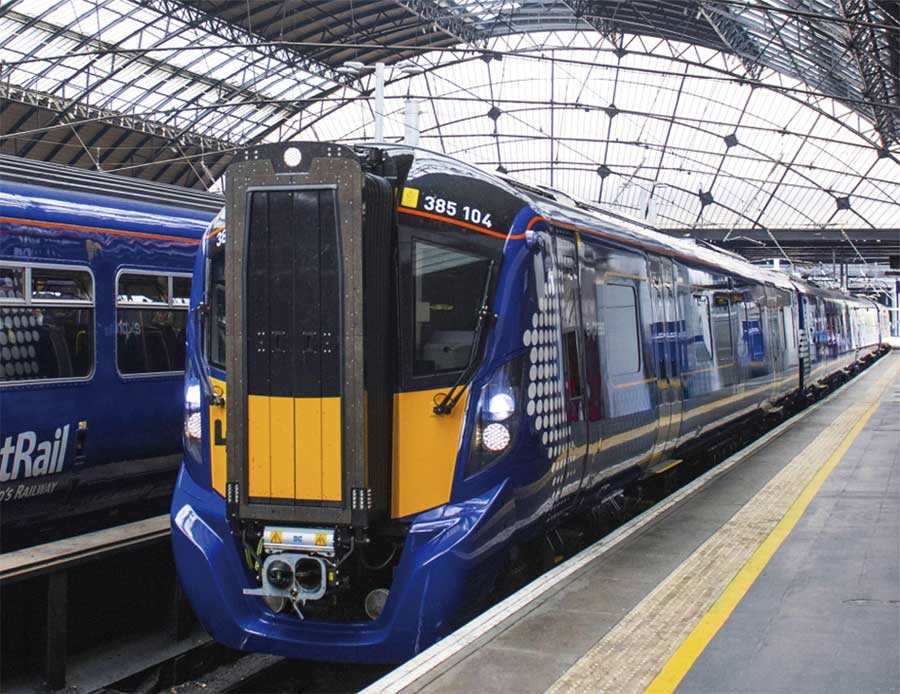 While the rolling stock are initially being used for services between Edinburgh and Glasgow, the intention is to progressively deploy them on other lines in the central belt of Scotland, including the Stirling-Alloa-Dunblane line. The new trains have a maximum operating speed of 161 km/h and the travel time between Edinburgh and Glasgow has been shortened from 51 to 42 minutes compared to the previous diesel trains. Capacity per train has also been increased by up to 130 seats, with electric power sockets available at all seats as well as access to a public wireless local-area network (LAN).

The Class 385 rolling stock represent the first order for Hitachi's AT-200. A total of 70 trains (234 cars) will be produced at Kasado Works in the Yamaguchi Prefecture of Japan and at a plant in Durham, UK. The maintenance contract is for a period of 10 years.