Quiet operation is one of the main benefits of automobiles such as electric vehicles (EVs) that are powered by an electric motor. Noise arises when vibrations propagate through the air, with vibration in turn being influenced by the design of the motor and the performance of the inverter used to control it. Given the lack of any existing methods for assessing vibration at the design stage, Hitachi has developed a technique that can help reduce vibration by performing a coupled analysis of the motor and its control, having first modeled the motor and inverter characteristics.

Vibration is determined by the exciting force (the source of the vibration) and mechanical resonances. The primary exciting force in the motor comes from the electromagnetic components that are in turn determined by the design and are proportional to motor speed. The second source of vibration arises from the harmonic current pulses from the inverter as they flow through the motor. Mechanical resonances, meanwhile, occur in the motor case and vehicle chassis. While vibration has previously been subject to three-dimensional analysis, the high computational load has made it difficult to perform a coupled analysis that includes control.

The new method uses an excitation model in which the electromagnetic forces present between the motor's rotor and stator are represented as unidimensional characteristics. The model includes both of the vibration sources described above. As simplifying the model to a single dimension reduced the amount of computation required, motor vibration can be analyzed under close to real-world conditions, including the control system.

In the future, Hitachi intends to utilize the new technique in the design of electric drive systems that include measures to minimize vibration. 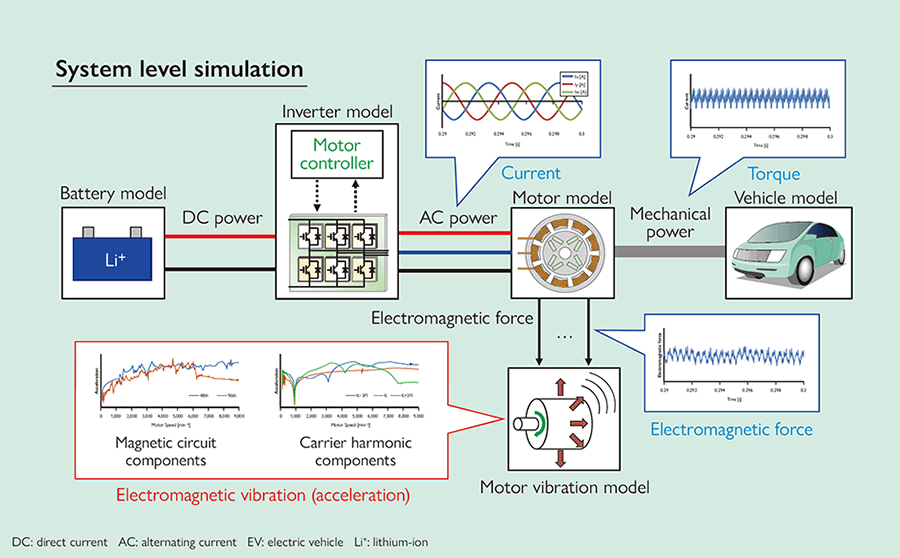 2. Flowchart of steps from AI learning to implementation on ECU

Progress is being made on the development of autonomous driving techniques that can function in place of the driver to prevent accidents. Meanwhile, in order to implement advanced forms of autonomous driving, recent years have also seen more consideration being given to using artificial intelligence (AI) for purposes such as using vehicle-mounted cameras to identify surrounding objects. Unfortunately, running computationally heavy AI processing in real-time on the electronic control units (ECUs) used for autonomous driving poses a problem. In response, Hitachi has been working on the development of the following two techniques for resource-constrained computing that reduce the computational load of AI.

The deployment of these techniques in an object recognition AI succeeded in reducing computation to about one-tenth what it had been while still achieving almost the same recognition accuracy.

Hitachi intends to continue working on this technology so that it can contribute to the early adoption of autonomous driving by enabling AIs to run with lower computational load and power consumption. 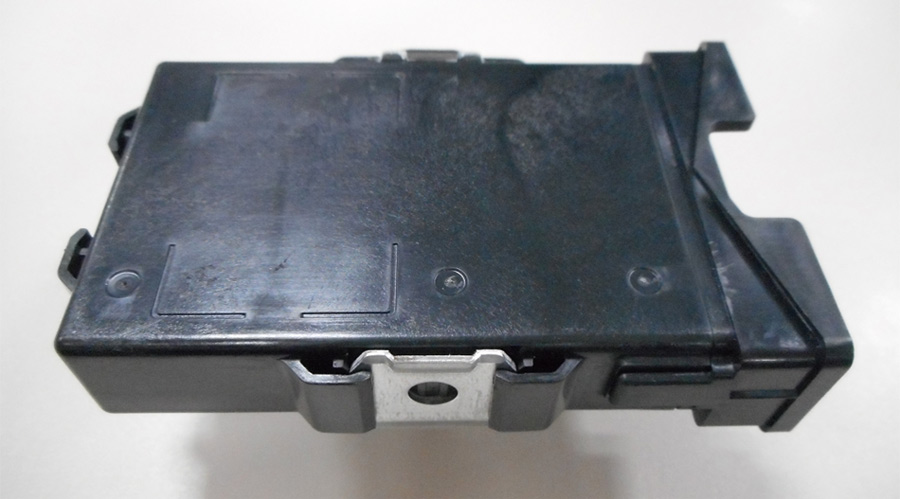 As it works toward the practical realization of autonomous driving and the connected car, Hitachi has developed an automotive gateway that will play a core role in the next generation of automotive architectures, being equipped with functions for information security and the transmission of vehicle data.

The gateway has six interfaces that use the controller area network (CAN) standard for automotive networks and is able to redirect data from one interface channel to another. Its key information security functions include the filtering of invalid information and a bus load monitoring function that can detect denial-of-service (DoS) attacks and other forms of unauthorized access. The gateway works by transmitting a mix of two different types of data: control data that is forwarded in an order determined by priority, and diagnostic data that is sent in the order it is received. It keeps delays in data transmission to a minimum despite handling these two different types of communication control with conflicting requirements.

Future plans include further development of the gateway to enable support for Ethernet, which is increasingly being used in automotive networks, and the addition of an over-the-air (OTA) update function for the wireless upgrading of ECU software and security functions that work in tandem with the data center. Hitachi has developed a way to improve the thermal efficiency of engines in anticipation of vehicles with electrified internal combustion engines (ICEs) becoming more widespread in the future.

As electrified ICEs differ from conventional vehicle engines in that they have a narrower operating range and spend more time operating close to their point of optimal fuel efficiency, they make use of combustion control techniques and system products to reduce fuel consumption. These techniques for reducing fuel consumption are subject to the following three considerations.

(1) Expanding of lean burn area:
The injector has the potential for an improved homogeneous mixture.

(3) Loss reduction
Pistons with a low friction layer reduce the friction with the cylinder wall.

Hitachi has demonstrated that the use of these system products can achieve thermal efficiencies in excess of 45% (8.9% higher than the base case).

5. Internal structure of multifunction airflow sensor and how it is mounted in air intake 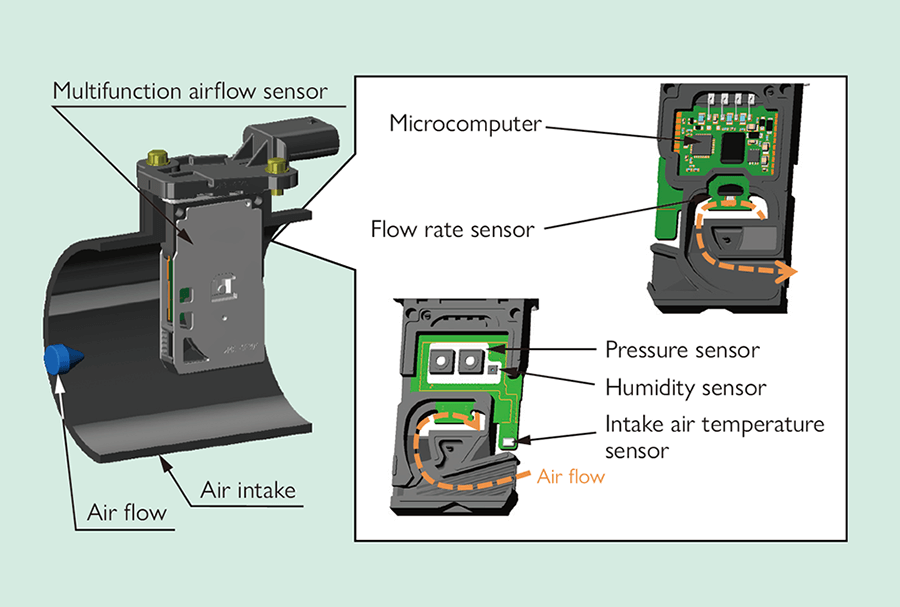 With regulations governing exhaust gases and fuel efficiency becoming stricter, it has become commonplace for vehicle engine control to use multifunction airflow sensors able to measure a number of different physical parameters, including the temperature, moisture content, and pressure of the air as well as its flow rate.

Hitachi led the world by commencing commercial production of a hot wire multifunction airflow sensor in 2011. This has now been followed by the addition of a digital communications capability to further enhance the sensor's functions.

(1) High mounting density using printed circuit board
The sensing element is a silicon semiconductor. The sensor has been made smaller and the component count and manufacturing workload reduced by consolidating all electronic components on a printed circuit board.
(2) Functionality enhanced by addition of digital communications
To facilitate use in automotive networks, a local interconnect network (LIN) is used to transmit all the sensor signals (temperature, humidity, pressure, and flow rate) on a single wire.

Use of the LIN enhances functionality by providing bi-directional communications between the sensor and engine control unit.

In the future, Hitachi intends to work on the development of sensors for high-performance engines through performance improvements and increased component integration. 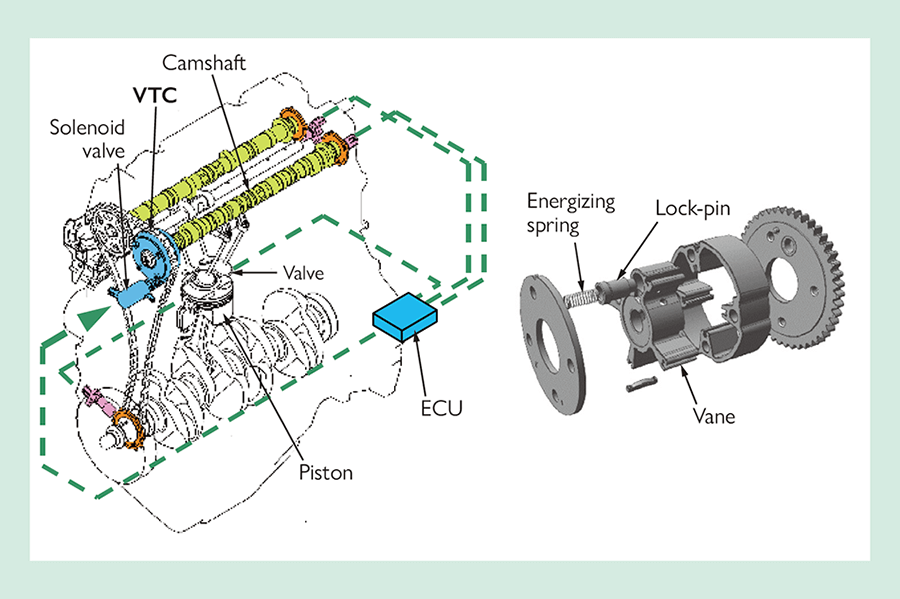 In response to the need for new VTC technology to further improve engine performance as environmental and fuel efficiency regulations become increasingly strict around the world, Hitachi has developed a world-first VTC simulation and produced a new high-performance VTC.

The new simulation uses detailed three-dimensional models of the mechanism, fluids, and engine regions respectively to achieve the high levels of accuracy demanded by original equipment manufacturers (OEMs). It also features world-first single-dimensional modeling of gas-liquid two-phase flow and is the first such simulation to replicate engine starting. Hitachi has also determined the mechanism behind the widely shared problem of poor lock-pin release during engine starting, coming up with a design for preventing it. This achieves differentiation by reducing the lock-pin release pressure and expanding the VTC operation range. Recognition of this technology development has led to orders for new business.

7. Shock absorber with reservoir tube made from aluminum

The automotive industry is actively engaged in technological and product developments aimed at reducing emissions and improving fuel efficiency.

Hitachi Automotive Systems is also working to reduce the weight of automotive parts to improve fuel efficiency. In the case of shock absorbers, this includes use of hollow rods and adopting plastic parts.

In response to a request from Fiat Chrysler Automobiles N.V., Hitachi has developed a new shock absorber that has been made significantly lighter by using aluminum in place of steel in the reservoir tube, one of the main components. The challenges that had to be overcome to achieve the same performance and reliability as previous products included new machining techniques for use in commercial production as well as performance degradation due to the properties of aluminum, its heat treatment, and different thermal expansion. Nevertheless, Hitachi has achieved commercial production of shock absorbers with reservoir tubes made from aluminum that are 15% lighter than before.

This is the first time that aluminum shock absorbers have been used in large pickup trucks, which account for a large share of the North American market, and this will make a major contribution to the future expansion of the suspension business. 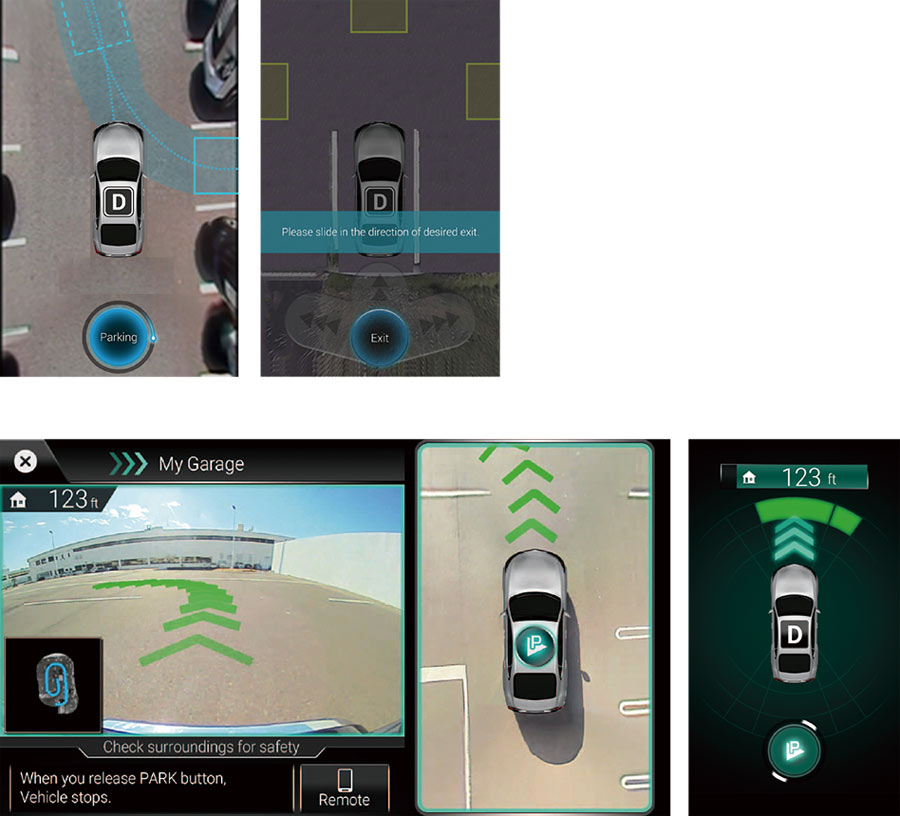 Clarion Co., Ltd. has supplied an automatic car parking ECU for a major domestic car manufacturer that achieves accurate spatial recognition by using the ECU to integrate sonar signals with image recognition that is based on a technique for showing bird's-eye footage of the vehicle. This technique was jointly developed with the car manufacturer over many years.

In 2017, Clarion and Hitachi Automotive Systems jointly developed a remote parking system that can automatically park a vehicle (double, parallel, or garage parking) while being operated remotely from a smartphone. The system combines the SurroundEye vehicle periphery camera system from Clarion with vehicle control technology from Hitachi Automotive Systems that also includes steering, brake, and other actuator control. The system parks the car by remote control, using a human-machine interface (HMI) that provides a real-time display on the smartphone of the region surrounding the vehicle and the intended trajectory to ensure that the driver can operate the vehicle safely with good awareness of what is happening around it.

A Park by Memory function was subsequently developed in 2018. It stores information about the region around the vehicle and how it is parked and performs parking automatically. The bird's-eye footage provided by SurroundEye is combined with information about objects around the vehicle detected by sonar and position information acquired using the Global Positioning System (GPS). The driver is notified that automatic parking is available when the vehicle approaches a carpark that is stored in the system, and it can be invoked simply by the driver pressing a button in the vehicle or on the screen of the smartphone app.

With vehicle accidents caused by driving errors while parking having become a social problem in recent years, Clarion and Hitachi intend to contribute to the early introduction of safe automatic parking that does not rely on human operation.