Hitachi received an order for a power management system update from rail transport operator Yurikamome Inc. The completed equipment was delivered to the site after production finished in March 2019. The equipment is now being tested on-site in preparation for the start of operation planned for September 2020.

To provide a testing platform for developing the next generation of Shinkansen trains, Hitachi has drawn on the Model E956 development concept to provide products used to demonstrate the latest Shinkansen technologies. Seeking greater levels of safety and stability, Hitachi has added a linear deceleration system for bogies to provide a technology for rapidly stopping a Shinkansen train during an earthquake. A roof-mounted aerodynamic resistance plate unit was also delivered, providing a mechanism that decelerates from air resistance by raising resistance plates that are stored on the roof during normal operation. A snow-resistant body structure was provided by changing the air flow using specially designed underfloor closing plates to prevent snow buildup.

To improve comfort, the passenger compartments were given a specially designed interior configuration, and the train structure and passenger compartment interior environment were evaluated for window size and presence of windows. The interior was divided in two to provide an environment enabling comparative evaluations of passenger compartments. To improve environmental performance, a front-end shape with a 22-meter-long head section designed for environmental performance was provided to combat the piston effect by reducing the pressure wave when the train enters a tunnel. A rooftop device placement structure with two types of replaceable low-noise pantographs on the roof were provided.

To innovate maintenance, a system for recording equipment condition data was provided to enable condition-based maintenance (CBM). Data gathering will be continued for use in future predictive failure detection and failure restoration/maintenance.

The test train will be used in operation testing done mainly on the Tohoku Shinkansen line between Sendai and Shin-Aomori through March 2022. To verify its performance, it will be operated at speeds of up to 400 km/h several times. Operation at top speeds of up to 360 km/h is also planned, demonstrating technologies designed for the next generation of service trains on the Tohoku Shinkansen line of tomorrow.

To mark the company’s centennial in 2015, Seibu Railway Co., Ltd. decided to adopt a new flagship train model for service over the next century. The new model was planned as the replacement for the New Red Arrow Seibu 10000 Series trains that are currently the primary service model on Tokyo’s Ikebukuro and Seibu Chichibu lines. Hitachi has manufactured 12 trains (84 carriages) of this model.

While several design-centric train models have been developed in recent years, Hitachi aimed to create a new never-before-seen model able to harmonize with urban or natural surroundings and blend into the scenery. To achieve this goal, the basic design was supervised by Kazuyo Sejima, a world-renowned architect who has won the Pritzker Architecture Prize along with a number of other prizes for architecture.

Hitachi won the order for the new limited express train model, and brought the design concept to life by developing the following components: 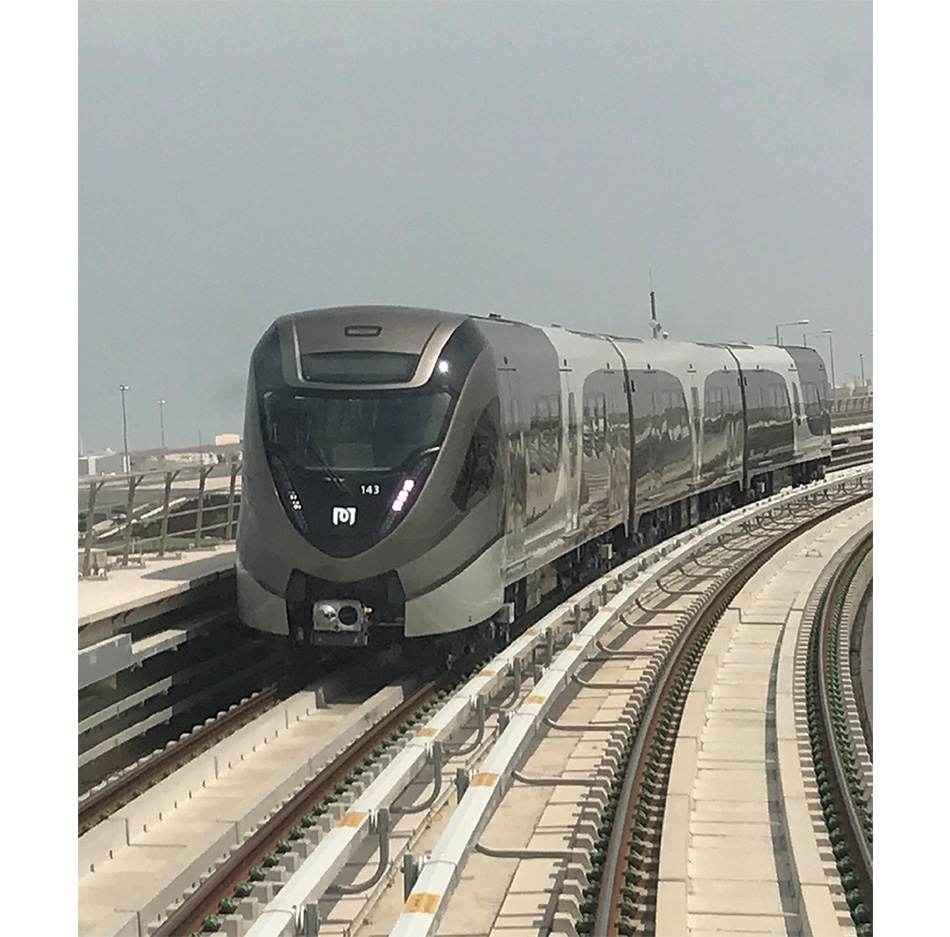 The Doha Metro is a rapid transit system in Qatar’s capital Doha. In recent years, Doha has achieved brisk economic growth thanks to its abundant energy resources. However this also presents a challenge, as traffic congestion has become a serious problem due to the rapid increase in population and automobile industry. Combining this with the Fédération Internationale de Football Association (FIFA) Soccer World Cup, which is scheduled to be held in 2022, a reliable public transportation system has become an urgent necessity.

In order to cope with this problem, the construction of Doha Metro has been started with an operational length of 76 km for 3 lines for Phase 1. The first section of Redline has started its preview services on 8 May 2019.

Up to the present time, a total of 225 cars (3 cars × 75 trains) have been delivered to Doha, with an additional 35 trains to be completed next year. Eventually, a line extension with an approximate length of 140 km is currently planned for the near future. 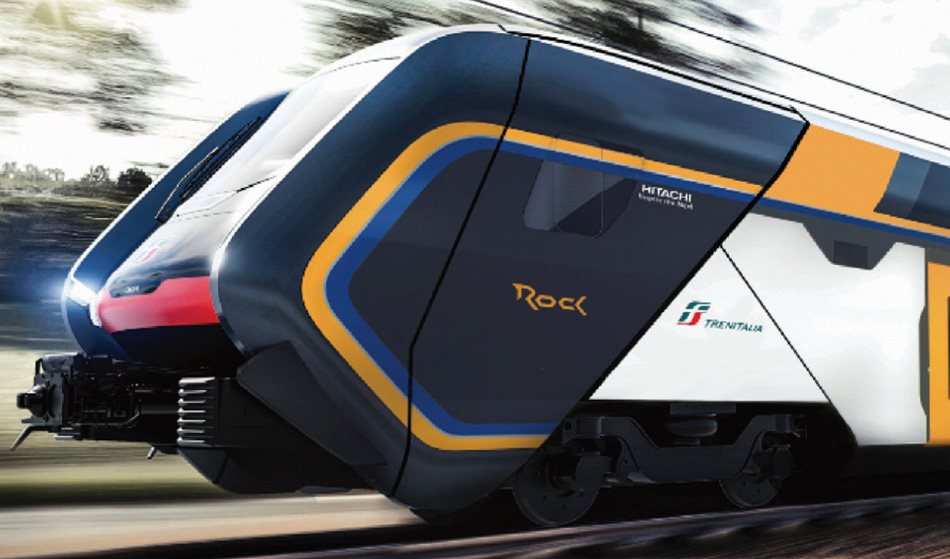 New double-deck trains are needed to meet the increasing demand for high-capacity mass transportation systems used to provide regional and commuter services. The Caravaggio Electric Multiple Unit (EMU) is a part of Hitachi’s new family of double-deck high-capacity trains. Framework agreements were signed with clients for the supply of up to 300 Caravaggio EMU train sets to Trenitalia and 120 train sets to Ferrovie Nord Milano from 2019. This new rolling stock is set to become the backbone of the main Italian operators’ fleets.

Compared to current fleets operating in Italy, the performance of the Caravaggio EMU is state-of-the-art in terms of transportation capacity, acceleration and speed, reliability, and environmental impact. Moreover, a focus on aesthetic design has given the trains an innovative and recognizable shape that stands out in the current market.

Also, the trains were developed using the best combination of the technologies available at Hitachi, both in Italy and Japan, and are to be assembled at Hitachi’s Italian plants in Pistoia and Reggio Calabria using technological components manufactured at the Mito and Naples factories.

Appearance inspections are one of the routine inspection jobs of rolling stock maintenance, done by touring and visually inspecting the equipment. Visual inspections have always had a number of challenges. For example, they make quantitative evaluations difficult since they rely on the qualitative judgment of the inspector. They also make aging difficult to assess since no record of a part’s state is kept once evaluated as normal.

Hitachi has developed a technology that combines a three-dimensional sensor with a laser Doppler velocity meter to enable continuous acquisition of undistorted high-resolution information about properties such as unevenness or brightness from a running train’s side surfaces or underfloor equipment. The information can be quantitatively evaluated to monitor changes in the state of the train’s appearance caused by factors such as aging or the environment. The technology can acquire undistorted still images of a running train at a fixed coordinate position, along with depth information. This ability makes it easy to extract a component for inspection and to assess how much it has changed relative to the past, without increasing the load needed for tasks such as image processing.

Tests on running trains have shown that the technology can quantitatively identify bolt looseness and amounts of snow buildup around bogies, demonstrating its effectiveness. By linking the technology to artificial intelligence (AI) and other analysis platforms in the future, it is expected to enable use for applications such as inspection automation and deterioration prediction.

[6] Appearance inspection technology for use in rolling stock maintenance 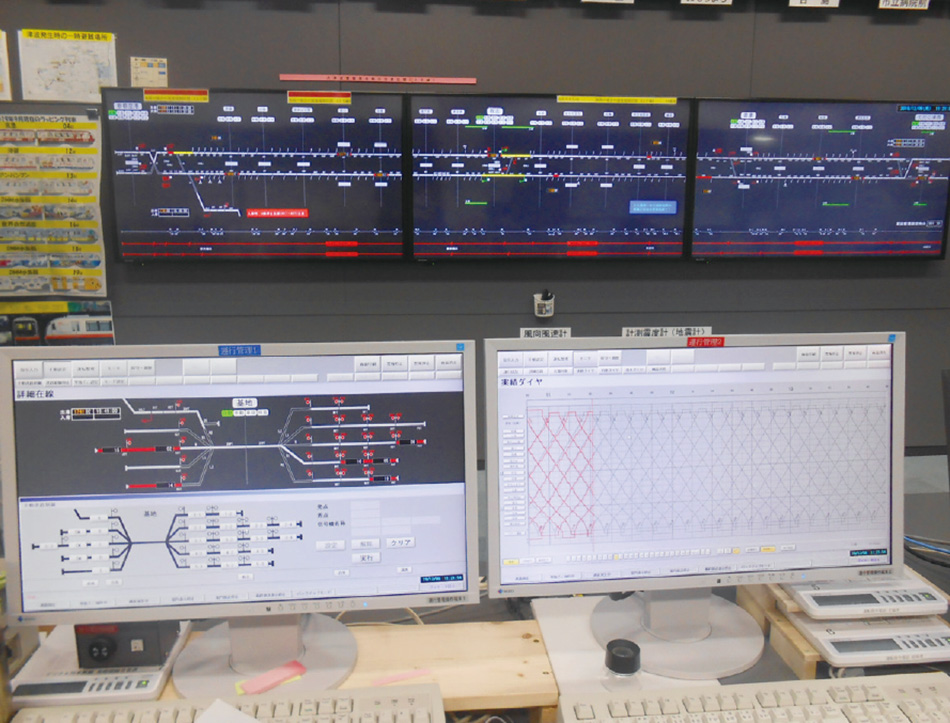 In 2019, Okinawa Urban Monorail, Inc. created a plan for extending its service area to include four new stations (Ishimine, Kyozuka, Urasoe-Maeda, and Tedako-Uranishi) and a new electrical substation (Uranishi Substation). As a result, three systems (the traffic management system, power management system, and equipment/firefighting monitoring system) delivered by Hitachi to Okinawa Urban Monorail when it began business in 2003 were recently improved to handle the extended area.

The traffic management system was updated to support new distribution of timetable information to broadcast equipment and information displays, and to augment the information provided to passengers. It was also updated to support main line train tracking and automatic depot entry/exit control. Service in the extended area started on October 1, 2019. Until that date, the existing systems were progressively switched over to the new systems as operation in the existing service area is assessed.