Hitachi has developed and deployed a hybrid railway traffic management AI to support and automate the increasingly complex task of replanning train timetables. Machine learning and other forms of AI have made rapid progress over recent years. While machine learning techniques have been deployed in a wide range of applications, they have yet to see much use at the core of important social infrastructure systems such as in railways where safety is a top priority. While the convenience of railways has been enhanced by a rise in the number of direct train services, a downside is the complexity this adds to the task of replanning train timetables in the event of service disruptions. Such disruptions can be caused by abnormal weather events or incidents such as human injury accidents. Another major challenge for railway operating companies is the passing on of expertise in how to recover from these timetable disruptions, an issue exacerbated by the labor shortages associated with trends like low birthrates and aging populations. This article describes methods developed to overcome these challenges. 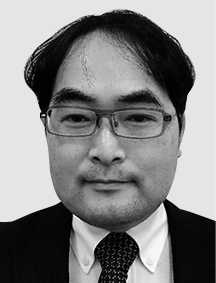 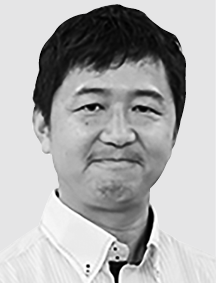 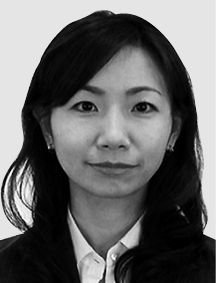 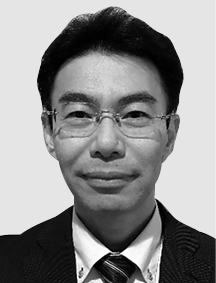 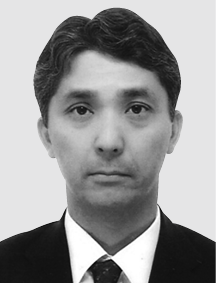 Hitachi has supplied numerous traffic management systems for railways. These social infrastructure systems play a central role in ensuring the safety, security, and comfort of railway transportation by performing automatic control of signaling equipment to ensure that trains operate in accordance with their timetables (train operation schedules, also known as “train graphs”).

While computer control of railway networks is now taken for granted, Hitachi’s history as a developer of railway traffic management systems dates back to the computer aided traffic control system (COMTRAC) for Tokaido Shinkansen that entered commercial operation in 1972. COMTRAC was supplied to Japanese National Railways (JNR) as the national railway company was then known. Over the five decades since then, Hitachi has continued to take advantage of improvements in computer functionality and performance and the latest available technologies in its ongoing pursuit of innovation, taking pride in its track record of delivering safe, reliable, and comfortable railway systems.

Machine learning has made rapid advances over recent years. This article describes how it is being put to use in social infrastructure systems for railway traffic management. While it has been common over recent times to equate artificial intelligence (AI) with machine learning, in the context of the railway industry and its long history of technological evolution, this article will define AI as being the science and practice of building intelligent computer programs(1).

Figure 1 shows these three generations of AI. These AI techniques remain in use, complementing the operation of railway traffic management systems and running alongside them, not only providing optimal control at railway stations and along the length of railway lines, but also predicting the train movements that will result from this optimal control.

Figure 1 — Advances in Traffic Management AI and Evolution of Technology

Traffic management AI has advanced over time to meet the evolving needs for railway transportation.

Recent years have seen a rise in the number of direct train services that run on different sections of track or on track operated by different railway companies. While such services, when operating normally, are a great convenience for passengers, allowing them to reach various different destinations without having to change trains, they also increase the complexity of railway operations. Similarly, they bring new challenges in terms of how to cope with major changes to timetables brought about by factors such as abnormal weather or COVID-19. Another management challenge that presents itself over a longer timeframe is that of how to pass on the expertise of network control staff against a background that includes an aging population and falling birthrate.

The need to overcome these challenges has brought rising demand for the application of AI to the task of recovering from timetable disruptions, something that has fallen outside the scope of automation provided by past railway traffic management systems. To facilitate the use of computers to recover from timetable disruptions, methods are available for documenting the expertise of network control staff in how to deal with the disruption of train services, and for then translating this expertise into explicit logic in a computer program. These methods are technically viable and can be relied on over the short term.

The problem, however, with explicitly specifying the logic of how to recover from timetable disruption in a computer program is that it lacks general applicability. This is due to the need for the program to be rewritten if it is to be used on a different railway line where different practices are used for operation and for dealing with disruptions. This led Hitachi to look at new methods with more general applicability that are based on machine learning.

Machine learning has made dramatic advances over recent years. With the emergence of deep learning, in particular, it has even reached the point where it can outperform humans in certain tasks. This has increased public expectations for machine learning and significantly expanded the range of problems that it is able to solve in practice. The systems used for railway traffic management can be thought of as lying at the heart of the social infrastructure. If machine learning is to be deployed in such systems, there is a need to consider the constraints that apply in the real world as well as the risk that bad decisions by machine learning might destabilize services that underpin public life. The following sections go into detail about the challenges of preventing bad decisions, the impact on people and on real-world systems, durability for long-term use, and the ability to keep up with an ever-changing world, also describing how these challenges can be overcome. 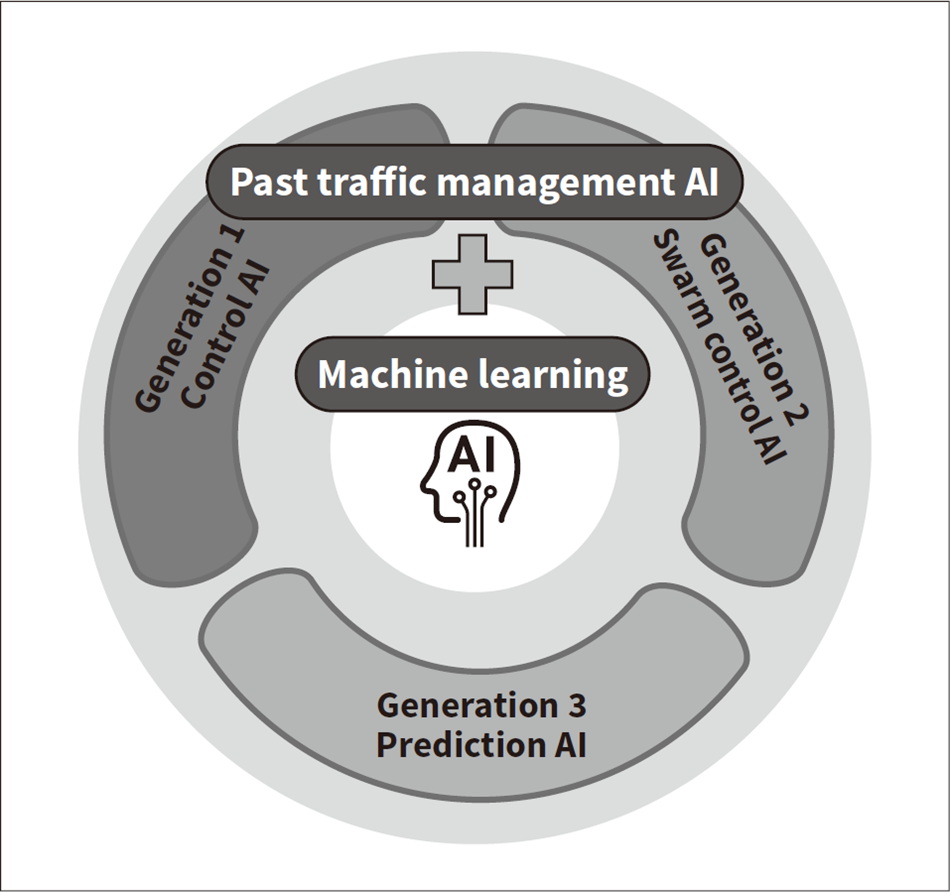 Hitachi has developed a new traffic management AI suitable for use on social infrastructure systems that demand high reliability by combining machine learning with approaches to AI used for this application in the past. 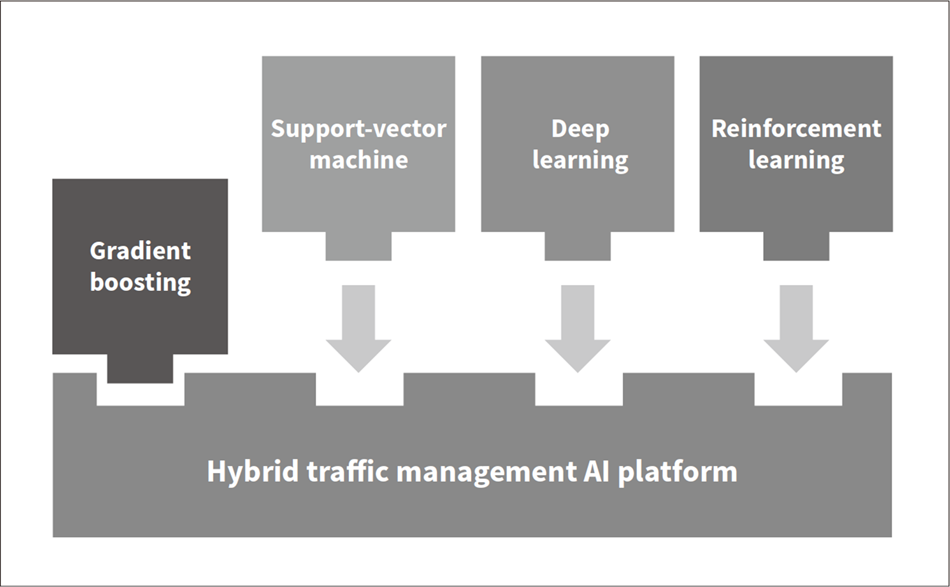 A swappable plug-in configuration has been adopted to enable the ongoing use of rapidly evolving machine learning in railway traffic management systems characterized by long life cycles.

Figure 4 — Machine Learning by Use of Screens by Staff 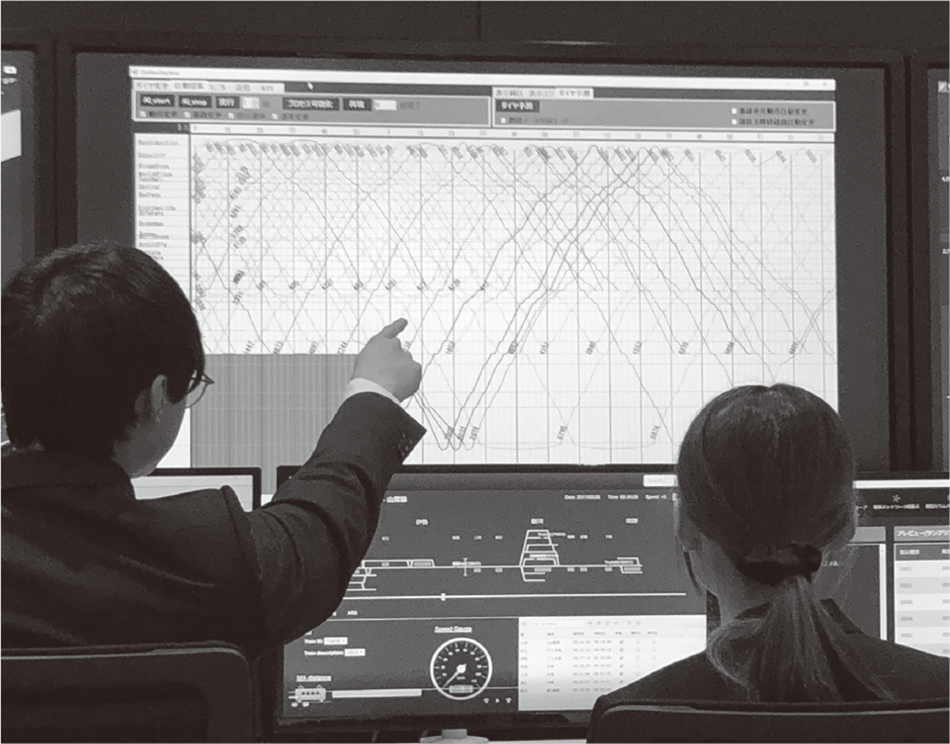 The work of generating data for machine learning is made easier by having staff make timetable changes using the same screens they would use on their existing equipment.

*
Unix is a registered trademark of the Open Group in the USA and other countries. 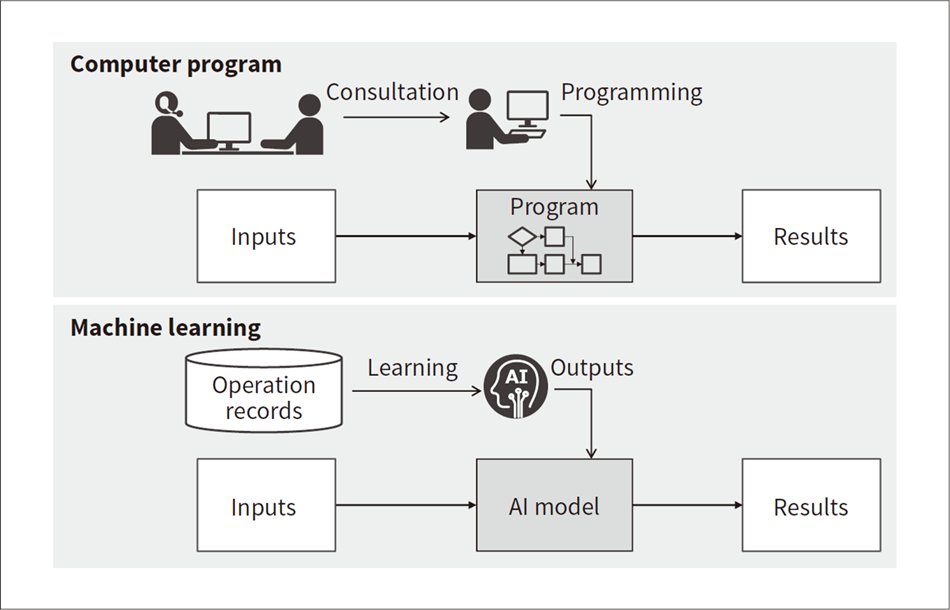 Whereas past practice was to replicate the timetable recovery methods as explained by the network control staff, machine learning can acquire their timetable recovery expertise from past operational data that records how they responded to such events.

To provide ways of addressing the challenges described above that have broad applicability, Hitachi has developed a platform for hybrid traffic management AI. This AI is trained on past data recording the actions of network control staff when recovering from disruptions and then used to calculate such actions on its own, with constraint programming being used to check the practical viability of the plans it generates. This approach takes advantage of the capabilities of machine learning to acquire and then replicate the sort of recovery expertise held by network control staff that is difficult to document. With its use of machine learning, this platform configuration facilitates application of the AI to different railways or on other lines because it learns from past operational data that records how network control staff handled timetable recovery (see Figure 5). 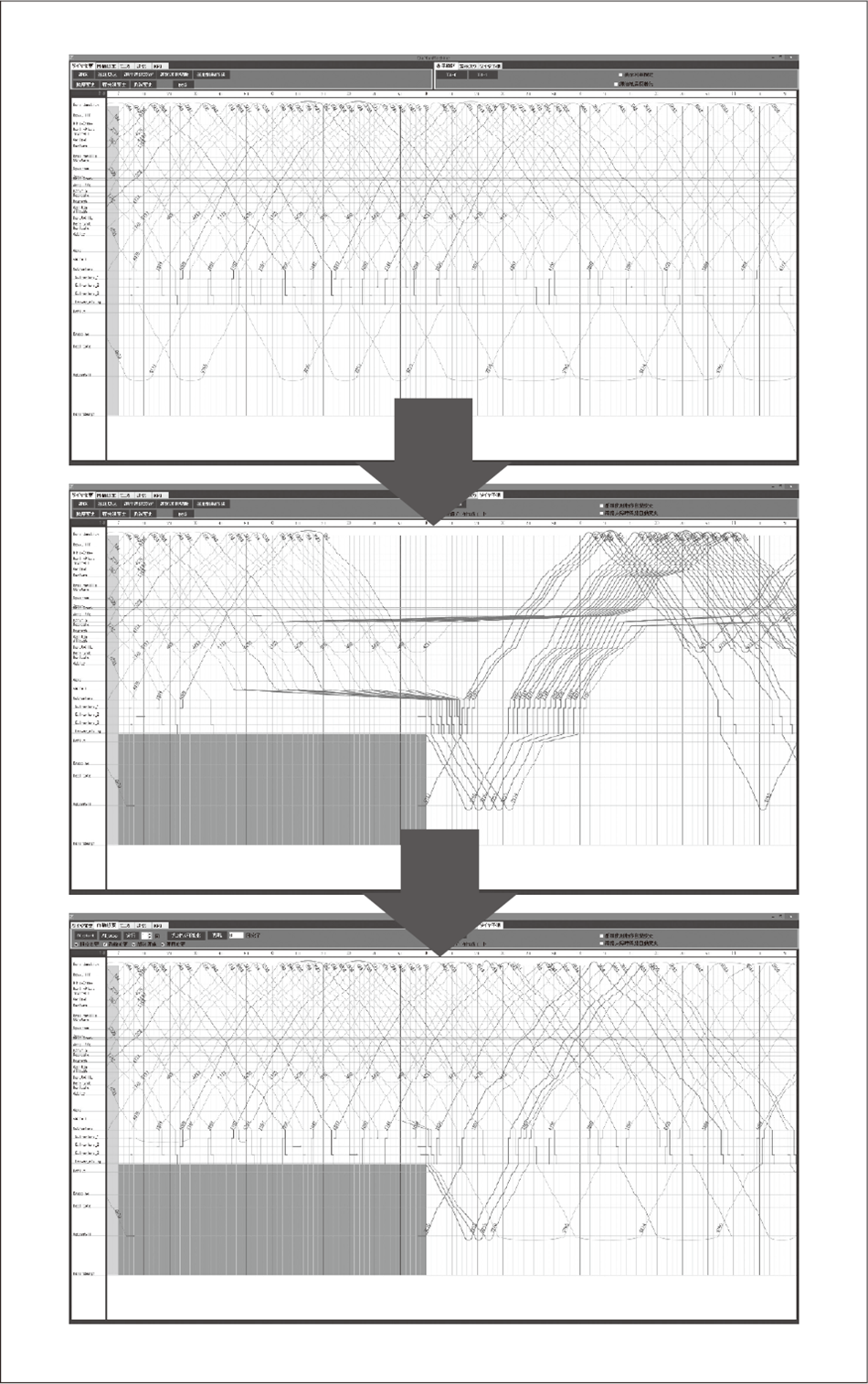 The screens show, respectively, the initial planned timetable (top), the timetable predicted to result from a two-hour interruption to railway services (middle), and the recovery timetable generated by the hybrid traffic management AI (bottom).

A trial to verify the operation of the hybrid traffic management AI described above was conducted using data on the Sydney railway network made available by the State of New South Wales in Australia(6). This involved track and timetable data on the T4 line.

Figure 6 shows an example operational recovery plan generated using the AI following a disruption to services. The graph at the top uses the train graph format to represent the initial planned timetable for all the trains on the line, with the horizontal axis representing time and the vertical axis listing the stations.

The middle screen shows the disruption caused by the delay, with the rectangle at the bottom left indicating where service was interrupted. The lines that appear shifted to the right relative to where they are drawn on the top screen represent the predicted delays resulting from the disruption. Similarly, the numerous horizontal lines represent the long periods of time these trains would spend halted between stations.

The bottommost screen shows the recovery timetable generated by the hybrid traffic management AI. This new timetable significantly reduces the number of passengers stuck in trains for long periods of time, with services able to continue to those locations where this is possible. The new timetable should also speed up the time taken to get full services back up and running. Although performed for a simple system configuration devised for trial purposes, the planning and calculation took only about 10 s, indicating that response time should not pose a problem for real-time operation in actual deployment.

While this article presented results from a trial conducted on a railway overseas, it demonstrates the viability of using the AI on operational systems. As different railway companies and lines have different practices they follow when timetable disruptions occur, the intention is to proceed with actual deployment through the use of learning to accommodate these line-specific differences.

Finally, the authors would like to thank everyone who assisted with this work.