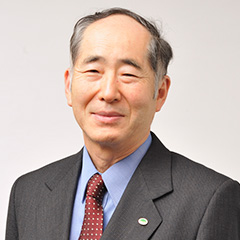 Hideki KAMBARA, Ph.D. was appointed as a Fellow of Hitachi in 2003, and to his current position as Emeritus Fellow on his retirement in April 2015.

Kambara joined Hitachi’s Central Research Laboratory as a researcher in April 1972 after completing his Ph.D. in Chemistry in the Faculty of Science at the University of Tokyo. At the Central Research Laboratory, Kambara contributed to the development of new ionization technologies for biomaterials through research and development of the atmospheric pressure ionization mass spectrometer (APIMS), field ionization, matrix SIMS, LC/MC (liquid chromatograph/mass spectrometer) integrated equipment. In particular, the matrix SIMS pioneered matrix-assisted ionization which was used in the later MALDI-TOF (matrix-assisted laser desorption/ionization time-of-flight) MS. From 1982, he led the world in research on a fluorescent DNA sequencer, developing the first commercial fluorescent DNA sequencer in Japan. He then went on to develop a high-throughput capillary gel array DNA sequencer which enabled the early completion of the Human Genome Project. The importance of his work was covered as “Unsung Hero” in the special issue of Science on Genome, as well as in “Stars of Asia” in Business Week magazine. These systems have been used worldwide for over 20 years as basic equipment in life as well as medical science and biotechnology fields.

Kambara then went on to develop various technologies for analyzing gene expression profiles, genetic mutations including SNPS and a probe array technology using beads. Since 2006, he has been pioneering research in single cell analysis as a representative of a MEXT* “Grant-in-Aid for Scientific Research on Priority Areas” project of the Ministry of Science, Japan, and has continued to host many international conferences in this area.

Although Kambara assumed the position of Emeritus Fellow on his retirement from Hitachi in 2015, he continues to be an active in leader in technology development. Believing that location specific analysis of biological tissue is important to understand tissue function, he pioneered the development and practical use of a micro-dissection device to collect minute sections of biomaterial, and is using these new tools to realize his new goal of a bio-information system similar to a biological version of Google Earth.

To date he has published many papers and patents including 127 original papers, 54 reports including commentaries, and more than 300 patent applications of which over 100 have been granted.

Construction of an information system just like Google Earth for the human body.