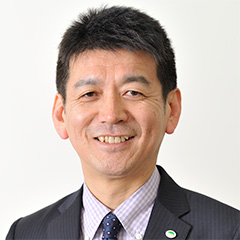 Kazuo YANO, D.Eng. is currently a Fellow of Hitachi, Ltd. He is also the leader of the Happiness Project in the Future Investment Division.

Yano joined Hitachi as a researcher after receiving a M.Sc. from Waseda University, Tokyo, Japan in 1984. He is known as a pioneer for his early works in the area of semiconductors, such as complementary pass-transistor logic (CPL) and the world-first room-temperature single-electron memories.

In 2003, his research focus shifted to sensors and sensor networks, measuring and analyzing big data. His work on quantifying happiness from human big data has been applied to over 30 companies to raise the collective happiness level of employees in the workplace. Further, his work on multi-purpose artificial intelligence which has already been applied to over 60 cases in 14 domains, is raising great interest across industries.

Yano is also a Fellow of IEEE, a member of the Japan Society of Applied Physics, the Physical Society of Japan, the Japanese Society for Artificial Intelligence and the IEICE of Japan. His extensive work has been recognized through numerous awards including the including the 1994 IEEE Electron Devices Society Paul Rappaport Award, 1996 IEEE ISSCC Lewis Winner Award, 1998 IEEE ISSCC Jack Raper Award, 2007 MBE Erice Prize, Best Paper Award of International Conference on ASE/IEEE Social Informatics 2012. He has served on Technical Program Committee Members of IEDM, DAC, ASSCC, ASP-DAC, SPOTS and EmNet, as the Symposium Co-Chairman/Chairman for 2008/2009 Symposium on VLSI Circuits, and more recently as a member of the External Advisory Board to IEEE Spectrum, a member of Information Science and Technology Committee of the Ministry of Education, Culture, Sports, Science and Technology, in Japan.

He has also co-authored or authored books including "The Invisible Hand of Data" (Soshisha, 2014) which was described as one of top-10 business books in Japan in 2014 by BookVinegar and since then has been translated into Chinese, Korean and English. He has over 350 patent applications, and his papers have been cited in over 2500 papers.

Yano was a Visiting Scientist at the Arizona State University from 1991-1992. He received his D.Eng. in Physics from Waseda University in 1993. He is currently an Adjunct Professor at the Tokyo Institute of Technology.