As companies handle an increasingly larger volume of data, all flash arrays that feature large memory capacity and fast processing speed are becoming progressively popular. Hitachi, Ltd. has developed all flash arrays, called Hitach Virtual Storage Platform F Series, which incorporate data compression technologies. To develop them, the Company's researchers from a variety of technical areas have successfully met the challenge of reducing the bit cost of all flash arrays through data compression, while keeping them performing at a high level.

MATSUSHITAYes, that's right. Looking ahead, we will see an expansion of IoT (Internet of Things) businesses, in which a large volume of sensor data is analyzed and the findings are provided to customers as a new value. Because of this and other reasons, it is projected that the data volume handled by companies will explosively expand going forward. To keep up with such trends of society, they will require storage devices featuring a large memory capacity and high processing speed. Our customers who require such high-performance storage devices are quickly switching to all flash arrays, which incorporate flash drives like solid state drives (SSDs) as memory devices.

KOSEKIIn the case of an all flash array, the time from when it is given an instruction to read certain data it stores to when it gives back the relevant data is far shorter than a conventional storage device incorporating a hard disk drive (HDD). For example, when you make an on-line reservation from a website, you want to receive a reply immediately after you click the reservation button, don't you? Similarly, for customers who want to finish processing as soon as possible, the high-performance all flash arrays are a very attractive alternative.

KOSEKIIn 2012, the Company announced the Hitachi Accelerated Flash (HAF), a flash drive module (hereafter, "flash module") of its own. Since then, as other companies have announced many flash drives, the price has been falling remarkably. However, it is true that flash drives, or all flash arrays, are still more expensive than HDDs, or HDD arrays. Thus, as a means to further reduce the bit cost (price per memory capacity), data compression technologies are gathering attention.

MATSUSHITAFor example, if you write 100 kilobytes (KB) of data onto a storage device, you usually require a memory capacity of 100 KB. However, if you can cut the size in half by compressing the data, you only need to buy memory capacity of 50 KB. In this case, the price per memory capacity is halved, which helps to lower the price of the storage device.
If the data compression technologies can change the general perception that "all flash arrays are expensive," it will facilitate further popularization and widespread use of all flash arrays.

How to compress data while maintaining the I/O performance

If the price goes down, all flash arrays are likely to become more familiar, aren't they?

MATSUSHITA I agree. But data compression technologies have had the major issue that they lower the input/output (I/O) performance of the all flash arrays.

Figure1: Difference in how data is compressed

Can you explain in detail how the new technology works?

KOSEKIOur newly developed technology has two main points. The first is that it enables flash modules to perform compression and decompression processing tasks at a high speed.
In this regard, we have newly developed a special flash module called the Hitachi Accelerated Flash Data Compression 2 (HAF DC2), which is the second-generation product of HAF.

This scheme has been patented.* We believe this method was made possible just because Hitachi produces both the storage controller and the flash modules on its own.

Figure 2: How the storage controller manages the free capacity of the flash modules 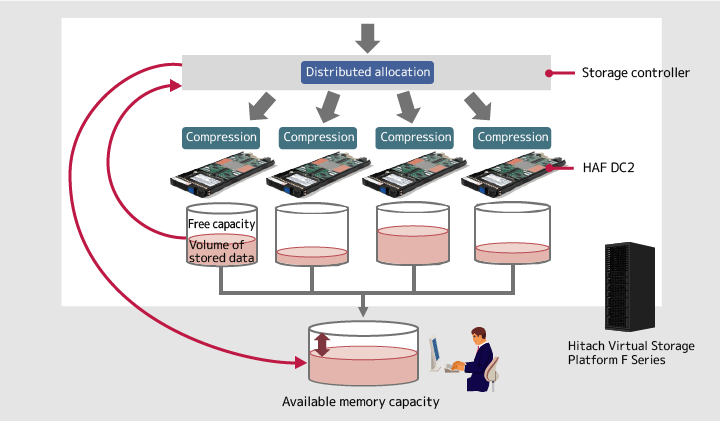 Do the storage controller and the flash module belong to different technology areas? 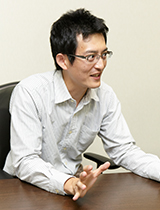 KOSEKIExactly. In past development efforts, there had been two different teams involved. One was engaged in developing such devices as flash modules, and the other worked to develop storage controllers. The teams independently designed the functions of respective products, and had few opportunities to directly discuss with each other.

In our latest development, however, the two teams worked together to achieve a specific function. This meant that, if either one of the teams was delayed in their development work, no evaluation of the function was possible. Furthermore, if any failure occurred, they had to arrange how to repair it and decide which team should secure the operations of the products to what degree. In order to avoid any discrepancy or inconsistency arising between the teams, we worked to assure that the teams elaborately discussed to determine the specifications.

MATSUSHITAOn the laboratory side, which we belong to, we decided on the entire framework, including which scheme to adopt. The scheme proposed by the laboratory was approved by the relevant business division. However, we faced difficulties after development started at the business division. I already mentioned that the free capacity of each flash module is monitored and combined to provide the available memory capacity to the users. Reflecting this idea into designing of the actual product was what we found difficult.

In what areas did you encounter difficulties?

MATSUSHITAFor the persons in charge of software development in the business division, it was understood that such devices as HDDs, SSDs and flash modules have a certain fixed memory capacity which remains unchanged. In this development, however, the free capacity of the flash modules changes depending on the data compression ratio. Therefore, you must control the devices in which you have no idea how much data can be written. For the business division, this was a totally different story from what they had assumed earlier. So we worked together with the business division to verify the appropriateness of the scheme from the viewpoints of whether the devices can actually be controlled and whether it is sure that the scheme causes no problems.

An example of what we discussed was: "The storage controller monitors the free capacity of the flash modules at the frequency of once every so-and-so seconds. During the cycle, the storage controller receives up to so-and-so number of 'write' requests. Then, isn't there any possibility that the flash modules receive more data than they can contain?" We tackled such issues one by one by gathering the ideas and wisdom of the team members, and after all these endeavors we successfully completed the product.

How did you feel when the product was completed?

KOSEKIOur stance is to cooperate with the members from the business division and, instead of simply devising the scheme, work all the way to applying the scheme to the product. I feel encouraged and rewarded when I see the research results materialize in a product and that serves society. Moreover, it is easier for me to explain to my family that I am making such a product. It's unlucky, though, that I cannot show them how the product actually works, because the product is used in core systems and other areas that ordinary people cannot see.

How do you think Hitachi's storage devices will evolve going forward? 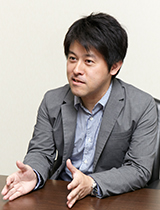 MATSUSHITAIt seems to me that, with the widespread use of the all flash arrays, the customers now have a different view of storage devices. Conventionally, it was generally believed that "storage devices are the slower part of the entire IT system." The storage managers in the IT departments use to frequently tune them to make them perform to the best of their ability, and Hitachi's storage devices also allowed a variety of settings for tuning up their performance.

More recently, however, there is a trend in which business departments directly purchase IT products and use them as a platform to launch new businesses. Our customers from such business departments, who are not specialists of IT products, sometimes tell us that they want to reduce the set-up and tuning operations as much as possible. Because of this, and with the number of managers specialized in storage devices decreasing, research would be needed to make storage devices easier to use. Then, you would be able to use them as easily as refrigerators, washing machines and other home appliances. Such ease of use should provide value for customers.

KOSEKIWhat added value should we provided to customers so that they choose Hitachi's storage devices from among the many storage products? To answer this question, we should grasp the changes in the market and in the industry as soon as possible and propose specific ideas. I believe that this is the issue that we must tackle going forward.

Is there any subject or theme that you want to work on as researchers?

MATSUSHITAWhen I was involved in supporting development in the business division, I strongly felt the importance of project management. Software development for storage devices is a very large-scale project, and promoting such a large-scale project smoothly is not a job that we can readily do. In doing either research or product development, we often need to cooperate with a variety of people. Therefore, I hope to foster and practice management skills so that I can play an active role as a team leader.

KOSEKISince I joined the Company, I have been engaged in applied research, which is closer to product development. More recently, however, I wish to have the opportunity to conduct basic research—a type of research that would plant seeds of new technologies, although they may not become practically available soon. In my view, what appeals to the researchers at Hitachi is that they can contribute to society in a variety of forms and ways.