Along with the spread of the energy saving mindset, LED lighting for home use has become popular. The general perception is that LEDs illuminate brighter while consuming less power. However, depending on the type of lighting equipment, the corners of rooms may seem darker when using LED light. This is attributable to the nature of LED light which shines in a straight direction without diffusing out.

The LED ceiling light developed by Hitachi achieves both brightness and energy savings. It uses a lens to disperse the light out so that the entire room is lit brightly. This article casts a spotlight on the development of LED ceiling lights, which have been continuously evolving.

Enhanced awareness of energy savings and acceptance of LED lighting

Why is it that we are seeing more LED lighting in our daily life than before? 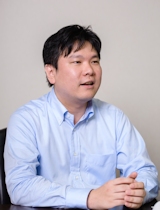 MURATAInitially, LED lighting attracted attention due to being highly praised for being "energy efficient." However, the biggest reason behind the increased popularity is probably due to the drop in the price of LEDs. In the earlier days when LEDs first appeared in the market as lighting, they were thought to be too expensive to replace incandescent bulbs and fluorescent lamps even though they were energy efficient. But their prices decreased in line with the increase in their popularity. Now, they have become a light source used in daily life.

BETSUIAnother major reason is that people have become more conscious of energy savings since the large-scale blackouts following the Great East Japan Earthquake. Conventional lighting is progressively being replaced by LED lighting, as the latter's energy efficiency is now widely understood.

Why are LEDs so energy efficient?

BETSUISimply stated, electrical energy can be converted to light more easily in LEDs than in incandescent lamps or fluorescent lamps.

For example, the filament of an incandescent lamp at a high temperature emits electromagnetic waves of various wavelengths including infrared rays, and the portion of energy that is not converted to light is wasted. In this regard, LEDs have an energy width called band gap that matches the wavelengths of lights, so that the majority of electric energy is converted to light. This means that LEDs have higher energy-to-light conversion efficiency. In other words, they are energy efficient.

MURATARated power consumption is one of the benchmarks used for comparing energy efficiency of lighting. For products applied to rooms of the same size measured in number of tatami mats, lower power consumption means higher energy efficiency, or energy savings. As far as Hitachi's products are concerned, the LED ceiling light released in fiscal 2013 for a room of a size up to 14 tatami mats (23 m2) consumes approximately half the power of an energy-efficient-type fluorescent light. Moreover, with the continuing advances in LED ceiling lights every year, an approximately 18% reduction in power consumption is even being realized compared with LED products of the previous fiscal year. 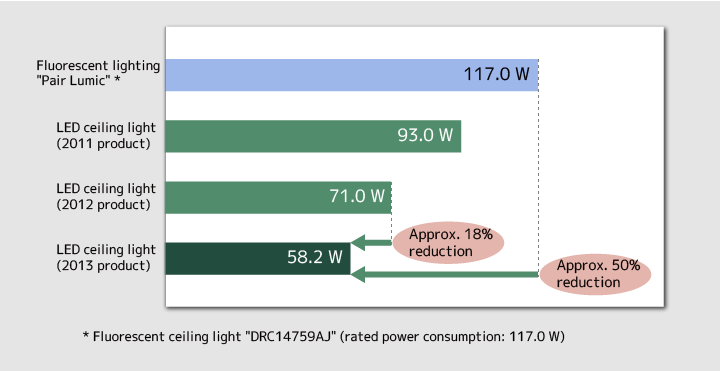 Can LEDs replace conventional light sources without being modified?

MURATANo, they can't. Since LEDs and conventional light sources have different light distribution, people may feel that they have different illumination with just a simple replacement.

Take fluorescent lamps, one of the conventional light sources, for example. They are pipe-shaped and the surface of the tube emits light so that light diffuses in various directions. As for LEDs, the area that emits light is small and its light only emits straight ahead. This is what is meant by the different light distribution.

Therefore, if fluorescent lamps are replaced by LED lighting without any special modifications, the brightness will seem odd. This is because the nature of LEDs causes the problem that only the part directly below the lighting is unusually bright while little light reaches the walls of the room. This was the issue that needed to be solved with LED lighting.

The issue has been successfully addressed by the "domed LED units" with lens function, originally developed by Hitachi.

BETSUIHave you ever looked at the inside of a home-use LED ceiling light? 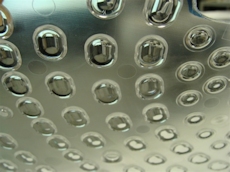 Inside an LED ceiling light are rows of LEDs, which total about 320 in lighting for a 14 tatami mat (23 m2) room. As LEDs pose the danger of causing burns or electrical shock when directly touched with hands, each individual LED is overlaid with a dome-shaped cover.

The covered LED as a whole is called an "LED unit," and Hitachi has added a lens function to the dome-shaped cover of each unit.

Could you tell us about the lens in more detail?

MURATAThe optical lens which we developed bends a light at a horizontal angle of 75 degrees. By adopting this optical lens to the dome-shaped cover, light of the lateral direction becomes stronger than light of the front direction.

BETSUISome other products also have modified the covers so that light diffuses out. A generally employed method is to make the surface of the cover "rough and abraded," like ground glass, to soften the emitted light. By doing so, a "subdued" light is diffused. This apparently solves the problem of LED light only emitting straight. However, this method is not a very efficient way to diffuse light.

First, the "subdued" light is too omnidirectional and lacks intensity in the horizontal direction. Moreover, some parts of the light bounce back from the fine irregularities of the rough and abraded section and return in the direction of the LED light, resulting in their being absorbed and wasted. That's why we worked on development focusing on a lens with a "glossy," smooth surface.

Figure 2: Types of LED unit covers and the way light diffuses out

Starting with no experience or knowledge

Is it difficult to produce a lens with a smooth surface?

BETSUIIndeed. A lens with a smooth surface can easily bend light, but the bent light may become too intense in some parts. When this happens, it causes bands and patterns of light to appear on the outer cover ("shade") of the lighting equipment. To avoid this, we had to work intensively on designing the lens.

MURATADevelopment of a lens starts with determining its shape by conducting simulations. We then produce a prototype and test it for verification. However, it is hard to obtain the expected results.

BETSUITo make things more complicated, there are cases in which simulations produce correct results but the actual products do not emit light correctly because of the differences in production methods. Prototypes are created by cutting plastic, but actual products are created by pouring melted plastic into molds (injection mold process) so that mass-production is possible. Since there are these differences in the production methods between prototype and actual product lenses, we must also take into account the possibility that "since it is a prototype, it may not emit light as expected."

It is extremely difficult to discern the cause of the failure—whether it is because the simulation is wrong, or the method to produce the prototypes are to blame. We occasionally investigated the simulations retroactively to check if a certain optical performance was the result of the dislocation of the prototype shape in a certain manner that we had supposed.

So, there were repeated cycles of trial and error? 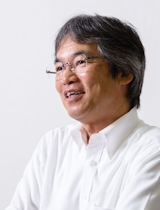 BETSUIHitachi recently entered the LED lighting field in 2011, and I myself got involved in LED lighting for the first time in 2012. So we started the development without any real experience.

After starting the development I realized that in the field of optics, lighting poses unique difficulties.
Before getting involved in LED lighting, I was engaged in plasma display research and Mr. Murata was involved in backlight research for projectors and liquid crystal display (LCD) TVs. Development of such technologies allowed us to set quantitative targets. In the case of the backlights for LCD TVs, for example, stringent designing is possible and effectiveness can be clearly judged by setting numerical targets for having them illuminate evenly.

However, lighting is a world of "vagueness." Once we establish numerical targets and created lighting equipment that achieves them. When we are sure of the results, we seek confirmation from the people in the business operations division that requested the development. Then, we usually receive such comments as "we want the light to be a little more fluffy" and "can you have this area illuminate more beautifully?" And we wonder, what do "fluffy" and "beautifully" mean? We cannot set up quantitative targets. It is difficult, but also quite intriguing.

Achieving even higher efficiency by optimizing the lens layouts

Were there also many innovations to the layouts of the lenses?

Figure 3: Comparison of difference in LED lighting illumination of LED 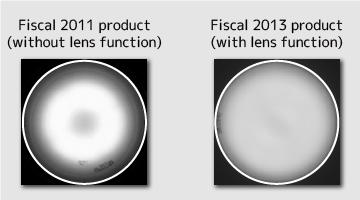 MURATAAn LED ceiling light does not have any LEDs in the central or periphery areas. However, we wanted such sections to be solidly illuminated. Therefore, in order to have them illuminate more effectively, we prepared two types of lenses and arranged their layout so that their respective characteristics can be realized.

I hear the fiscal 2013 product receive the Energy Conservation Grand Prize in Japan.

MURATAThat's right. We are very pleased, as receiving the Prize means that our research results were recognized. The LED ceiling light for fiscal 2013 achieved high energy-saving performance—the maximum luminous flux within the scope of the benchmark for that for the applicable room size (number of tatami mats)* and the intrinsic energy consumption efficiency of 102.4 - 104.8 lm/W (lumen/watts). We believe that one of the reasons we received the Prize is because we relentlessly pursued the theme of decreasing optical loss to successfully achieve both brightness and energy efficiency.

BETSUII hear that the product is selling well. It is only three years since Hitachi entered this market, but the Company is demonstrating its presence despite being a late comer. At the lighting sales sections of home appliance mass retailers, our products are now displayed in one of the most visible places. What really pleases me is that customers thinking about purchasing LED lighting visit the sales floors and select Hitachi's products after confirming how they illuminate.

*
Based on the "Standards for Indication of Applicable Room Size by Number of Tatami Mats in Catalogue for Housing" (Guide 121:2011) defined by Japan Lighting Manufacturers Association (JLMA).

Do you think the acceptance of LED lighting will expand at an even more accelerated pace? 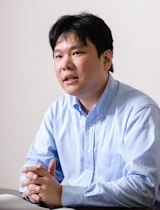 MURATAI believe that highly energy-efficient lighting using LEDs will become popular in other countries as well, not only limited to Japan. It is a big wish, but my hope is that our products will help spread an eco-friendly mindset regarding lighting among people around the world.

The performance of LEDs is also improving, and researchers and engineers like ourselves that utilize LEDs in technologies and products are devoted to research that will provide people around the world with better lighting environments. In my work, I want to be of some help in addressing the energy issue, always striving to offer products of greater value to society. BETSUICurrently, LED lighting is mainly used as an alternative for incandescent lamps, fluorescent lamps, halogen lamps and other lighting sources. Therefore, in most cases, LEDs are set to reproduce the illumination of existing lighting equipment.

However, I think that there should be exclusive lighting equipment for LEDs. Since existing lighting equipment is formed to use tubes or bulbs, the scope of application are limited. In contrast, LEDs are so small that they can emit light anywhere. It might be interesting to have "lighting equipment that can be realized only with LEDs" by taking advantage of this feature.

More recently, LEDs are being used in panels with irregular shapes using light-guiding plates or in turning signal lights of cars with excellent designs. Conventional lighting has been classified as "bulb-type" and "halogen-type," etc. and it would be great if there would be a lighting classification unique to LEDs... I believe that there are still many possibilities yet to be explored for LED lighting.