Cancer is a disease that threatens many peoples' lives all over the world and the number of cancer patients increases every year. In the midst of this reality, proton beam therapy is attracting a lot of attention as a method of treatment that imposes minimal stress on patients.

Through joint research with Hokkaido University, Hitachi has invented a new proton therapy system. Improving on the weaknesses of past proton beam therapies, this development is a new step towards the popularization of proton beam therapy.

Hitachi and Hokkaido University's challenge continues with the dream of a day when more and more people can receive proton beam therapy. 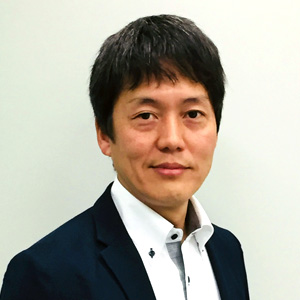 What exactly is cancer treatment that uses proton beams?

FUJIMOTOCancer treatment can be broadly divided into three types: surgical treatment in which the tumor is physically removed; chemotherapy where tumor growth is inhibited using carcinostatic agents, and radiotherapy, where the malignant tissue is irradiated with high-energy radiation to control the tumor and kill the diseased cells. Proton beam therapy falls under the category of radiotherapy, and imposes the least amount of stress on the patient.

Proton beams have superb characteristics. The energy released when passing through a person's body is small, and the most amount of energy is released when they stop. Radiotherapy inevitably damages properly functioning organs to some extent, but with proton beams, if we can make them stop precisely where the cancer is located, we are able to damage only the cancerous cells without largely affecting normal cells.

In the past, the area of irradiation was adjusted using a board that was carved in the shape of the patient's cancer. However, preparing a custom board each time is time consuming, and proton beams would affect the region around the cancerous area no matter what. This is why Hitachi invented spot-scanning irradiation technology. This method allows the manipulation of fine proton beams with electromagnets, and is a method which irradiates as though coloring in the tumor. As this method targets only the cancer, it is less likely to harm properly functioning organs. You might even say that it is the ultimate cancer treatment method.

Does this mean that spot-scanning irradiation technology causes significantly less stress on patients?

FUJIMOTOThat's correct. However, even spot-scanning irradiation technology had two weaknesses. The first was that as the equipment which generates the proton beam is very large, the system could only be installed in large medical facilities. The other was that it was difficult to treat "moving tumors." Through this joint research with Hokkaido University, we invented a new proton therapy apparatus which addressed these weaknesses.

What do you mean by "moving tumors?" 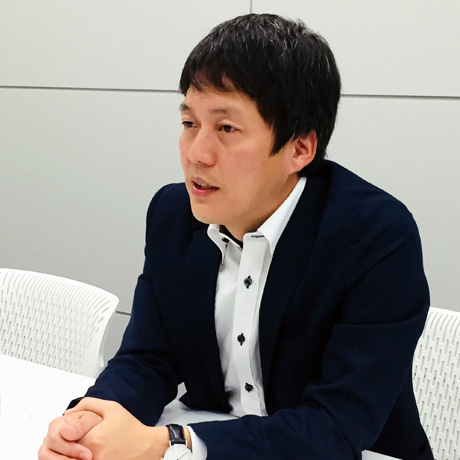 FUJIMOTOTake lung cancer for example. As the position of the lungs move with respiration, the cancerous region constantly varies. There are other organs that move along with respiration as well. It is difficult to target these types of moving tumors with the beams, and there are often cancer cells that remain.

In conducting x-ray therapy, Hokkaido University had already developed Real-Time image Gated Proton Beam Therapy ("RGPT") technology. We thought that if we could combine this technology with Hitachi's spot-scanning irradiation technology, we would be able to treat moving tumors with proton beams. In light of this thought, we proposed a joint research project to be led by Hokkaido University and applied to the Funding Program for World-Leading Innovative R&D on Science and Technology (the "FIRST Program").

The FIRST program was a 5 year program run by the Council for Science and Technology Policy, to support cutting-edge research in Japan to become world-leading technology. The solicitation for research themes and institutions was in 2009, and Hitachi and Hokkaido University's joint proposal was selected for funding with the hopes for developments in radiotherapy.

Ever since joining this company, I have always been involved in the development of radiotherapy systems. In this project, I was in charge of developing therapy planning software that would control the irradiation of proton beams and irradiation simulations, among other things.

How are proton beams irradiated for "moving tumors?"

FUJIMOTOFirst of all, we inject a gold marker near the cancer. Utilizing a trace of x-rays, we then locate the gold marker three-dimensionally. Even if the cancer moves due to the patient's breathing, we are able to locate the position of the cancer because the gold marker also moves. During treatment, we decide upon an area that we will irradiate the beams in advance, and by recording the location of the cancer up to 30-times per second, we are able to fire the beams only when the cancer is within the predetermined area. If the cancer falls outside of this predetermined area, we stop the beam. By combining RGPT with the technology to control proton beams at high levels of precision, we are now able to accurately irradiate cancers that move with respiration.

Moreover, we also had to be creative about how to fire the beams. With spot-scanning irradiation technology, the beams are fired in a zigzag motion, just as someone might color a piece of paper with a pen. However, with regular treatment apparatuses, the direction of the zigzags is determined by the apparatuses' composition. Therefore, we made an apparatus that can be preset to move in the direction that the cancer will move during the planning stage, meaning that the zigzags will move up and down if the cancer moves up and down, and the zigzags will move on a slant if the cancer moves on a slant. With this improvement, we have further minimized the effects that respiratory movements have upon treatment. The effects of treatment are best seen if proton beams are uniformly irradiated upon the cancer. By minimizing respiratory effects and inhibiting leftovers and nonuniformity, we hope that this will increase the effects of treatment.

In this way, with spot-scanning irradiation technology, where and how the beams are irradiated becomes extremely important, in addition to the precision of the irradiation. What controls this is the therapy planning software. Upon predicting the impact that the beams will have on the patient's body through simulations, we decide upon the optimum irradiation location and irradiation method which includes things such as energy. In the process of developing the functions and algorithms that I was in charge of, I received advice from Hokkaido University and continuously made improvements.

Were you also able to reduce the size of the equipment?

FUJIMOTOYes, we were. Proton beam irradiation apparatuses to date were rather large. In developing a new apparatus, we were able to make it compact by making it dedicated to the spot-scanning irradiation technology. The area required to install the apparatus is smaller than previous models, and can now be easily installed at hospitals.

Did you experience any difficulties throughout the research project?

Spot-scanning irradiation of proton beams is different from irradiating x-rays. As Hokkaido University's RGPT technology was developed for x-ray treatments, it would not irradiate properly upon simply combining the technologies. By repeatedly conducting experiments utilizing simulations and models, we developed a system that could irradiate proton beams, efficiently in a small amount of time and with accuracy.

How did the joint research project with Hokkaido University work?

Even before starting to design the details of the therapy apparatus, we exchanged ideas at Hitachi and Hokkaido University in order to think about how we could control the beams, and how we could irradiate cancer efficiently. It was very interesting that we conducted company-university discussions on the most fundamental aspects, and that we were able to complete a product. Through the process of discussions, there were a few technologies that were created that we could patent, so we also created a joint research structure which would allow us to think about how to submit a joint application, etc.

FUJIMOTOHokkaido University has both achievements and insights when it comes to cancer therapy as it has accumulated experience through x-ray treatments, etc. This type of field data is quite difficult to obtain as a manufacturer. The data played a key role throughout the research project. For example, one was the data representing respiration movement.

At the outset of the research, we had made the assumption that tumors would simply enter and exit the beam's irradiation area regularly due to respiration. However, from Hokkaido University's therapy data, we learned that actual cancers move in an extremely complex manner. With the existing beam control methods, we could not respond well to such irregular movements. Because of this, the efficiency of the irradiation would deteriorate, prolonging therapy. This is where we thought of a new beam control method that could correspond to the irregular movements.

Even after we completed the apparatus, we have continued to stay in touch with people at Hokkaido University, and have discussions about difficulties in this field and what kind of apparatuses we would like to develop next. We feel that we must continue to conduct joint research projects in order to gain access to the needs of medical practitioners and what is happening in the field of cancer therapy.

Hoping that more and more people will receive treatment

What was the response to this therapy apparatus from outside the company?

FUJIMOTOUpon starting this research project in 2010, we began treatment of actual cancer in 2014, and have already begun to compile a therapy track record. The work has been highly evaluated even from outside of the company, and have been granted many awards such as the Imperial Invention Prize and Japan Industrial Technology Awards. Today, Hitachi's Proton Therapy System has become extremely well-known, having been installed in key cancer treatment centers in the United States. We hope to continue to make even better products by increasing our understanding of the needs in this area to provide cutting-edge therapy.

This research achievement is the result of the skills and expertise of many people, including our partner Hokkaido University, and many different departments within Hitachi. I am merely representing all of their hard work. I believe we have made a high quality product by gathering superb technology from both within and outside of the company. 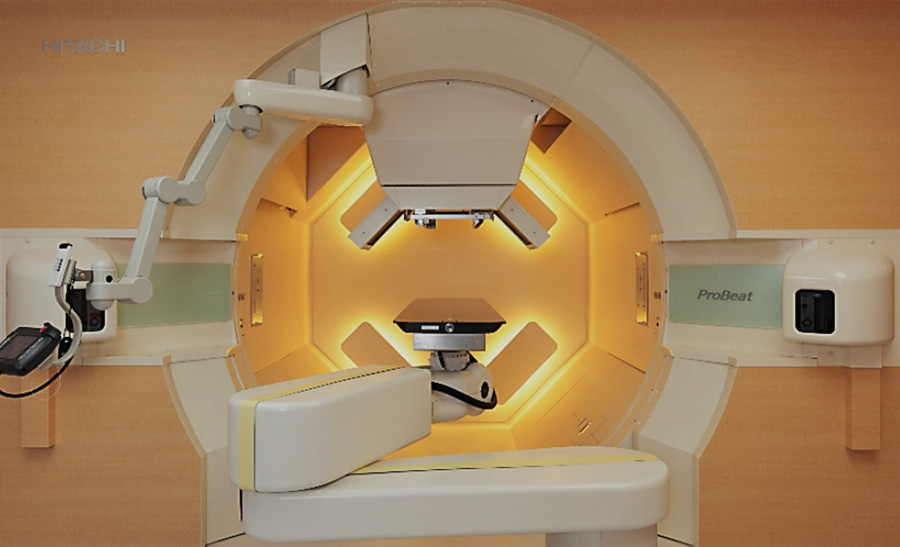 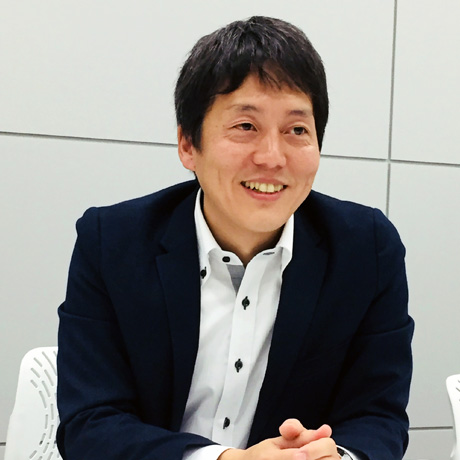 FUJIMOTOI hope to make proton beam therapy familiar to all. As of now, it is still a therapy method that can only be received at state-of-the-art hospitals. However, I hope to lower the threshold, and make it a therapy method that is available to everyone. In order to accomplish this, I hope that proton therapy systems are introduced at as many hospitals as possible. In order to install these at as many hospitals as possible, the system must become even more compact and inexpensive as possible. Although the therapy apparatus invented on this occasion is much smaller compared to previous models, I believe there is still room for improvement.

Moreover, I hope to make further improvements upon the RGPT technology. Although the current technology can accurately irradiate, it still requires simple surgery to insert gold markers to take position the tumor, and still irradiates a trace of x-rays in order to confirm the location. I hope to make this process simpler, and further decrease the burden on the patient. With these in mind, my goal is to make a product that can irradiate just as accurately as the current apparatus.

I hope to continue my research with the goal of allowing as many people as possible to receive proton beam therapy that has minimal burden.