［ⅱ］Autonomous Driving and Electrification for Safety and Security

To achieve zero traffic accidents, functions must be developed that prevent traffic accidents by correcting driver mistakes and that reduce the driving burden on the driver. These functions include advanced driver assistance systems that provide safety and security, such as automatic braking in emergencies, and autonomous driving technologies that provide comfort and convenience, such as hands-off following of the vehicle ahead. This article describes the Hitachi Group’s past achievements and future initiatives for developing advanced driver assistance and autonomous driving technologies in terms of a roadmap leading to autonomous driving by expanding the available driving locations and limited driving scenarios, and the three technologies necessary to realize this roadmap. 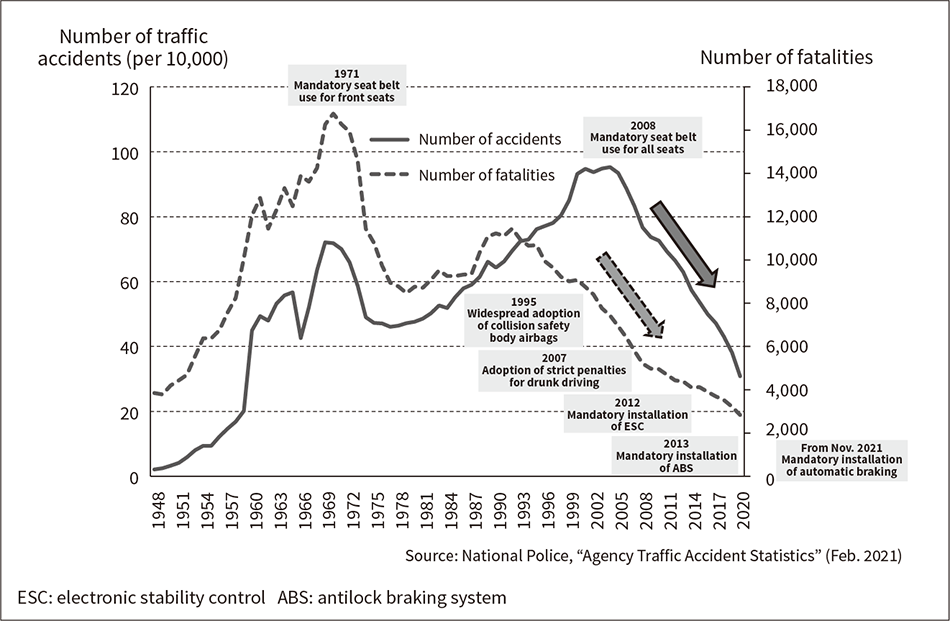 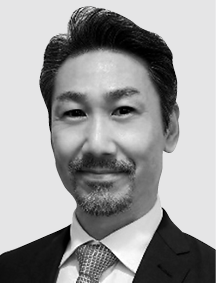 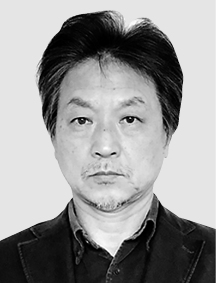 Recently, the automotive industry has undergone a period of great change that can be called a once-in-a-hundred-years transition. Rapid technological development is currently underway in a wide range of areas with these trends being exemplified by the acronym “CASE,” which stands for connected (C), autonomous (A), shared & services (S), and electric (E). Among these trends, autonomous driving (AD) is creating new functions by utilizing advances in sensing technology, large-scale data, and artificial intelligence (AI) to achieve safe, secure, comfortable, and convenient automobile travel.

This article describes Hitachi Group’s initiatives in advanced driver assistance systems (ADAS) and autonomous driving technology, which provide safety and security with the aim of achieving zero traffic accidents, and presents a roadmap showing past achievements and future initiatives, and trends in technology development.

To improve even more in the future and achieve zero traffic accidents and zero fatalities, the focus must be shifted from the passive safety that was the focus in the past to active safety with ADAS that reduce driving fatigue and prevent accidents by helping to eliminate human errors that can lead to accidents. Moreover, it is effective to incorporate autonomous driving functions that lead to reduced burden on the driver by eliminating the need for human operation.

Hitachi Group has been working for more than 20 years to develop technologies and products that will lead to the realization of AD/ADAS to provide safe and secure travel, and these have a proven record of adoption by automobile manufacturers (see Figure 2). 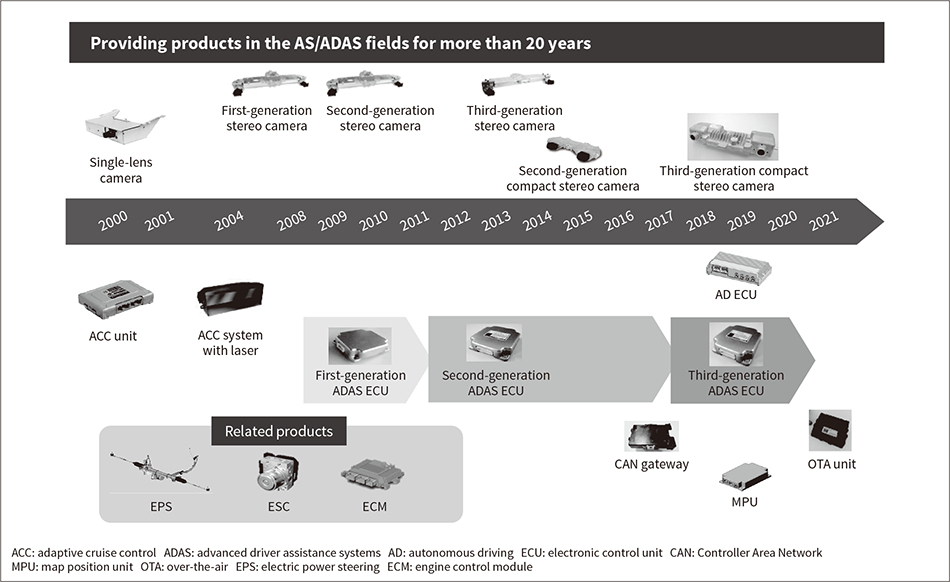 Hitachi Group has been working for more than 20 years on the development of products for AD/ADAS and vehicle control, with a proven record of adoption by automobile manufacturers.

In active safety, sensing technology that simultaneously and accurately recognizes the front, rear, left, and right sides of a vehicle is important for detecting dangerous situations as quickly as possible. In particular, Hitachi Group has been focusing on the development of stereo cameras that can recognize the distances to surrounding objects while simultaneously acquiring images. Because of the effectiveness of these functions, they have been adopted and installed in a variety of vehicles and have successfully prevented many accidents(2).

Electronic control units (ECUs) instantly make precise decisions based on the information recognized by sensors. Hitachi Group has developed ECUs for ADAS that control functions such as adaptive cruise control and lane keep assist, and has a proven record of incorporating them into products.

Recently, Hitachi Group has developed ECUs equipped with functions that enable hands-off following of the vehicle ahead on highways, overtaking of low-speed vehicles, and automatic lane change, contributing to the realization of autonomous driving that does not require human operation.

In order to respond safely to situations, vehicle dynamics such as “traveling,” “turning,” and “stopping” must be precisely controlled according to the decided behavior and path. Hitachi Group has been developing and commercializing control programs(3) as well as control devices such as electric power steering (EPS) and electronic stability control (ESC) to move vehicles safely and comfortably.

Connected car technologies are available that improve the value of autonomous driving not only through the evolution of the automobile itself, but also by utilizing the vast amount of information collected through social infrastructure.

One of the characteristics of Hitachi Group is that it can provide complete and secure distribution that ensures security from the service center to the vehicle, as represented by over-the-air (OTA) in-vehicle software updates and key management systems, by utilizing the comprehensive business domains of Hitachi Group, including social infrastructure, center services, and the communication security technologies that connect automobiles to them(4), (5).

Hitachi Group’s initiatives in the areas of advanced driver assistance and autonomous driving technology, as well as the functions it intends to achieve in the future, can be expressed in a roadmap with the evolution of autonomous driving technology on the horizontal axis and the functions and values to be provided on the vertical axis (see Figure 3). The area shown in the lower half of the figure is the area of advanced driver assistance, which aims to maximize safety and ultimately achieve zero accidents by providing functions that improve safety and security, such as reducing collision speed and autonomous emergency braking. The area above that is autonomous driving, which aims to reduce the driver’s driving burden and ultimately achieve a task zero level by providing functions that improve comfort and convenience, such as adaptive cruise control, automatic merging, and automatic right and left turns, based on safety and security.

Hitachi Group interprets this evolution and expansion of autonomous driving technology as an expansion of the locations and areas where AD/ADAS can be used. The area where autonomous driving is possible is called the operational design domain (ODD). Hitachi Group is working to expand the following two areas in order to realize safe, secure, convenient, and comfortable travel by expanding the scenarios where AD/ADAS can be used, in other words, by expanding the ODD.

The first ODD expansion is the expansion of driving locations. ADAS and autonomous driving functions are beginning to become widespread as functions that are limited to certain driving locations, such as highways and motorways with well-developed driving environments. In the future, the ODD will be expanded by extending its area of operation from highways to main roads, as well as ordinary roads and urban areas.

The second ODD expansion is the expansion of driving operations. Initially, the use of ADAS and autonomous driving functions was limited to driving in a single lane, but as the technology evolved, it has been expanded to include lane changes and overtaking of slow vehicles. In the future, the company will further expand the range of driving operations that can be supported and develop functions that can support driving in difficult situations, such as turning right or left at intersections and passing other vehicles on narrow roads.

The three technologies necessary for the ODD expansion described above are presented below.

Figure 4 shows a situation where a vehicle is traveling on a highway toward its destination and comes to a branched road.

This figure shows a situation where a vehicle is traveling on a highway toward its destination and comes to a branched road. Three technologies (1) to (3) are required for ODD expansion.

When driving on ordinary roads such as intersections and urban areas, it is necessary to accurately grasp a complex situation not only in front of the vehicle, but also around the entire vehicle to accurately decide which action to take next.

For this reason, Hitachi Group is developing multi-sensor fusion technology that combines and complements information from a wide variety of sensors to achieve more precise recognition and AI technology that can correctly recognize situations even in complex scenarios with many objects [see the article “Sensing Technology Leading Evolution of Autonomous Driving and Advanced Driver Assistance Systems”].

(2) Technology that Looks Ahead to Areas not Visible from Vehicle

If road conditions ahead are unrecognizable by the vehicle but can be grasped as look-ahead information, route setting and smooth vehicle control can be performed with an eye on the situation ahead, such as decelerating before a sharp turn, avoiding a collision with the end of a traffic jam, and changing lanes at the appropriate timing before an interchange. This allows for safer and more comfortable driving without sudden acceleration and deceleration.

To obtain this look-ahead information, Hitachi Group is developing technologies to estimate the current position of the vehicle by reading a highly accurate map with a map position unit (MPU), technologies to predict future risks, and technologies to obtain future road conditions such as map updates and traffic congestion information from the cloud through secure communication via OTA and central gateway (CGW) [see the article “Vehicle Electronic Control Units for Autonomous Driving in Safety and Comfort”].

Road conditions change constantly even while driving, so instantaneous and precise control is constantly required according to the situation that the vehicle encounters. ADAS ECUs and AD ECUs are responsible for these functions, and Hitachi Group has developed compact, highly reliable ECUs and has implemented and commercialized various advanced driver assistance and autonomous driving functions (see Figure 2).

Hitachi Group is also developing more advanced vehicle control technologies combining both safety and comfort, such as a trajectory planning algorithm(6) for comfortable travel that minimizes rolling and jerking, and vehicle control technology that enables highly accurate tracking of the target trajectory [see the article “Integrated Vehicle Control for Safe and Comfortable Driving” ].

As explained above, Hitachi Group has researched, developed, and possesses a wide array of technologies and services for advanced driver assistance and autonomous driving technologies that require a wide range of technological fields, including sensors, communications, situational judgment, and vehicle control.

By leveraging these strengths, Hitachi Group is aiming to become a systems integrator that provides advanced mobility solutions as a total system, from ECUs to center services, that contribute to the building of a sustainable society for safety and security and the realization of zero accidents and zero fatalities.